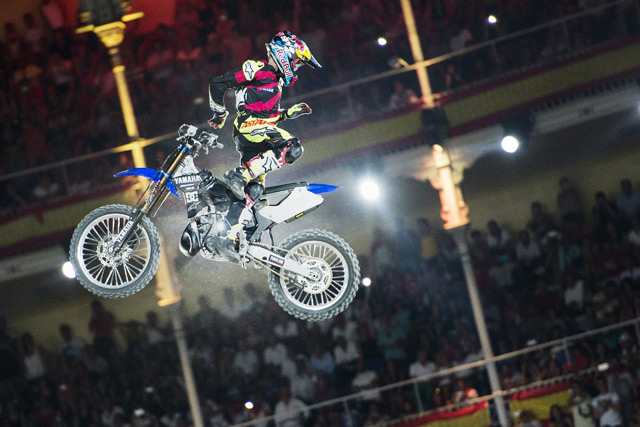 Tom PagÌ¬s carved his name into the record books with his third straight Red Bull X-Fighters victory in Madrid.

In front of a sold-out crowd, the flying Frenchman defied the odds and made the impossible possible as the first rider to win the world‰Ûªs most prestigious Freestyle Motocross competition three years in a row.

Never before in the history of Red Bull X-Fighters had an Freestyle Motocross rider managed to win the most coveted Madrid trophy three times in a row before Tom PagÌ¬s delivered a brilliant performance under excruciating pressure on Friday night.

In front of another sold-out crowd of 23,000 frenzied spectators, PagÌ¬s got his fifth career win in an unforgettable final over New Zealand‰Ûªs Levi Sherwood. World Tour leader Clinton Moore finished third but still holds the overall lead just ahead of PagÌ¬s after three of five stops in the world‰Ûªs most prestigious FMX tour.

Ignoring the conventional wisdom that no one could ever win the impossibly competitive Madrid stop three times in a row, PagÌ¬s crowned a dramatic night of FMX heroics with a magical run packed with gravity-defying jumps of up to 15 meters high and 30 meters in distance.

The Frenchman, who also won the 2013 World Tour, sent the appreciative Madrid crowd into ecstasy with a highlight-filled run that included four of the most difficult jumps known to man: the Volt, the Special Flip and his signature Alley-oop Flair and Bike Flip.

‰ÛÏIt was an insane night but it feels really good,‰Û