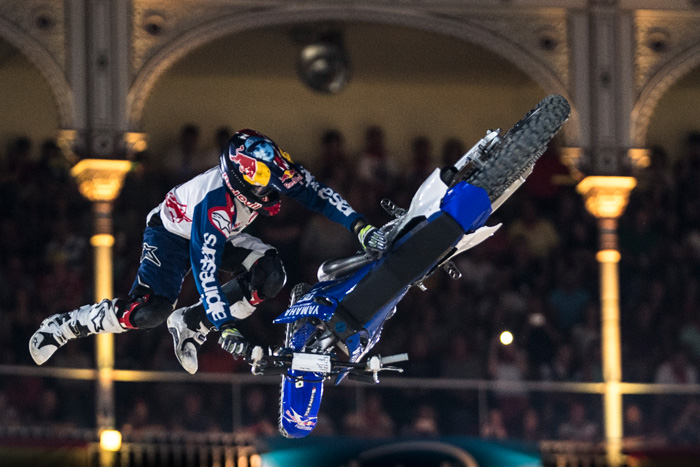 France‰Ûªs Thomas PagÌ¬s carved his name into the record books with a spectacular fourth straight Red Bull X-Fighters win in Madrid, the spiritual home of freestyle motocross that celebrated its 15th anniversary in style in front of a full house.

At the Las Ventas bullring PagÌ¬s treated the crowd to his new Front Flip Flair, the first time ever the trick was performed in competition.

In an epic three-way battle featuring the world‰Ûªs best FMX riders, Thomas PagÌ¬s emerged victorious at the Red Bull X-Fighters event in Madrid for a record-breaking fourth consecutive year on Friday. The flying Frenchman sent the sold-out crowd of more than 20,000 at the Las Ventas bullring into a state of euphoria with a brilliant run against Clinton Moore and Josh Sheehan Australia in a gripping final.

He filled his run with gravity-defying tricks of up to 15 meters high. Moore, the 2015 World Tour champion, came in a close second after a flawless run in the final with his Bundy jump recorded to be 14 meters high by a new Intel high-tech device. Sheehan had to settle for third despite nailing his signature double back flip.

Levi Sherwood (NZL) finished fourth on an unforgettable night at the FMX extravaganza in the Spanish capital. No other riders have won Madrid more than twice.