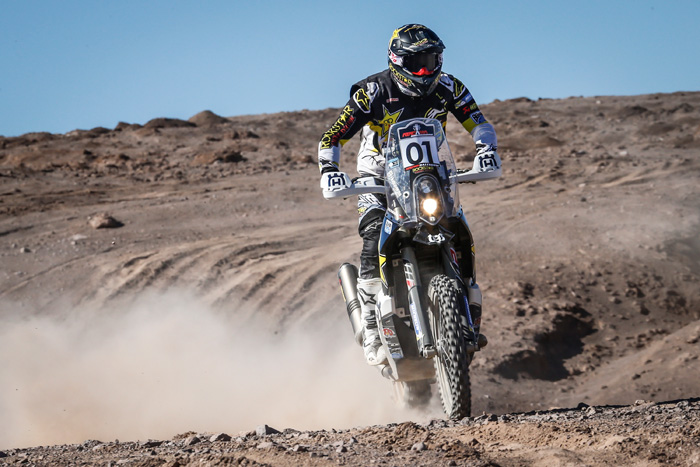 Ensuring the best possible end to his week-long adventure in the dunes of Chile, Pablo Quintanilla has secured overall victory at the 2017 edition of the Atacama Rally.

Following a well-calculated plan of attack, Pablo took advantage of his good starting position to make up for time lost during yesterday‰Ûªs stage four. Completing the 158km special in a total time of one hour and 35 minutes, the FR 450 Rally mounted rider regained the lead in the overall standings, going on to open up an eventual gap of more than two minutes to his closest rival.

Securing a fifth career victory at the Atacama Rally, Quintanilla has reduced the gap to the provisional leader of the FIM Cross-Country Rallies World Championship to six points.

‰ÛÏThis victory means a lot to me." Quintanilla commented. "After my injury in Qatar, I had such a tough month recovering. To return to competition here at my home round in Chile and take the win, it is such an incredible feeling.

"All through the event I felt fit and strong on the bike. My Husqvarna FR 450 Rally has been perfect every single day. I am glad that I have been able to close on Sam Sunderland in the championship.

"With two rounds remaining there is still everything to play for. It‰Ûªs been a huge team effort and there are no words to thank each member of the Rockstar Energy Husqvarna squad. They have been so supportive of me after coming back from my injury. I am proud that I could reward them with a win.‰Û 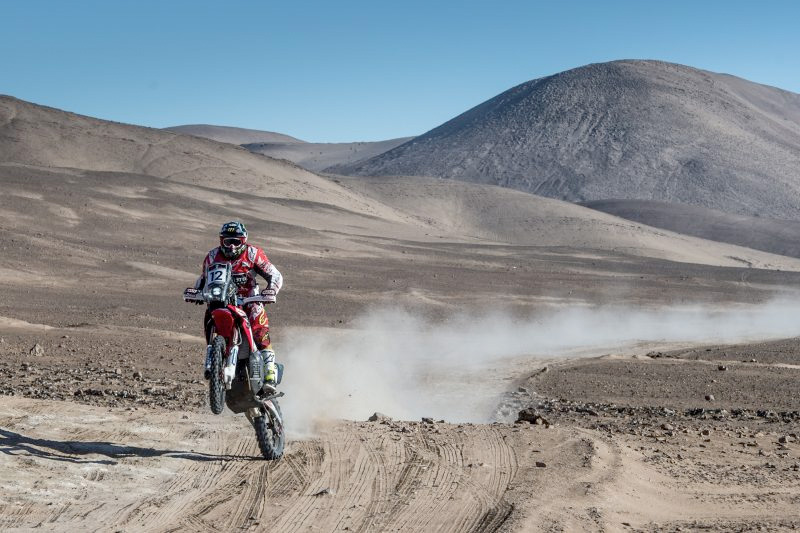 Kevin Benavides powers his way to second place - Credit: RallyZone - Edoardo Bauer
Monster Energy Honda Team succeeded in placing both of their duo of riders onto the podium at the end of the Atacama Rally as Kevin Benavides took the runner-up spot overall closely followed by team-mate Paulo GonÌ¤alves in third.

In spite of a tricky starting position for the final day‰Ûªs racing, Monster Energy Honda Team nevertheless finished the event with a notable all-round team effort and result. The riders had to head off in front as the race got underway this morning, with the adversaries starting immediately behind, who were able to take advantage and follow the tracks already marked out ahead. In spite of this, Kevin Benavides set a scorching rhythm with Chilean Pablo Quintanilla in hot pursuit. Kevin, who at one point made a minor navigation error, finished behind the current world champion.

"I‰Ûªm happy with my performance in this Atacama Rally." Benavides stated. "Even if today didn‰Ûªt go according to plan with the navigation error 30 kilometres into the special where Quintanilla overtook me. I pushed hard and passed him but he was unable to catch me to make up all the time that had been lost.

"We knew that starting from the front would be complicated in this final stage, and being obliged to win it, but in spite of this, I‰Ûªm happy for the pace that I‰Ûªve shown and the teamwork.

"The bike has run like a dream all week. I‰Ûªve re-found my confidence and the hand is not giving me any more pain. The next race is on home soil - the Ruta 40 - and we will fight hard to win it.

Meanwhile, Paulo GonÌ¤alves performed valiantly in the dunes given that his disadvantageous starting position was a mere three seconds ahead of Sam Sunderland. The Portuguese Monster Energy Honda Team rider was able to fend off and beat the winner of the last Dakar, a feat rewarded with a place on the final rostrum.

"Today, the stage was shorter, with lots of sand and dunes." Goncalves reflected. "I had a chance to make it onto the podium and I think I took advantage of it well, finishing third in the Atacama Rally, despite the six-minute penalty on the first day.

"I am quite happy because I had a very competitive level in this race. The Monster Energy Honda Team has worked really well every day and the bike too has performed very well. I am also happy with the hand injury, which didn‰Ûªt cause me much pain. In a few days we will compete again, but now we just have to enjoy this podium. Thanks for your support. 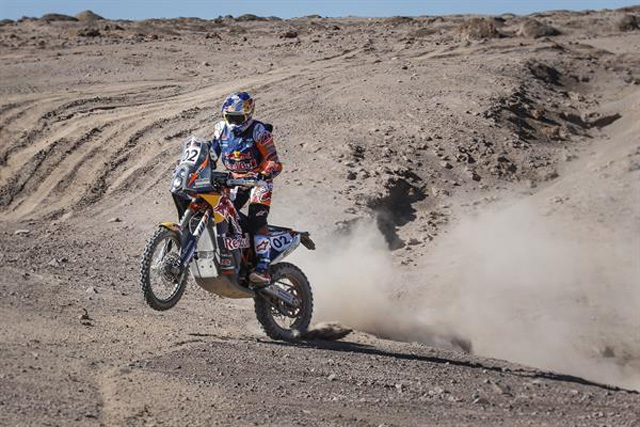 Sam Sunderland retains the championsihp lead
Championship leader heading into the event, Red Bull KTM's Sam Sunderland finished eighth on the extremely fast and short special stage near the city of Iquique leaving him in fourth place for the event which was enough to retain his lead in the FIM Cross-Country Rallies World Championship.

‰ÛÏThe main goal was to arrive at the finish and luckily I made it home safe and I still lead the world championship." Sunderland commented. "Fourth place overall is not what I was hoping for, but it could have been worse.

"It‰Ûªs disappointing not to finish on the podium, but at the same time I‰Ûªm simply glad to arrive at the finish in one piece. The road book seemed to be inaccurate at times. Distances were wrong and there were some hazards missing. I had a few moments today where my life flashed in front of my eyes.

Top image: Pablo Quintanilla on his way to winning the 2017 Atacama Rally