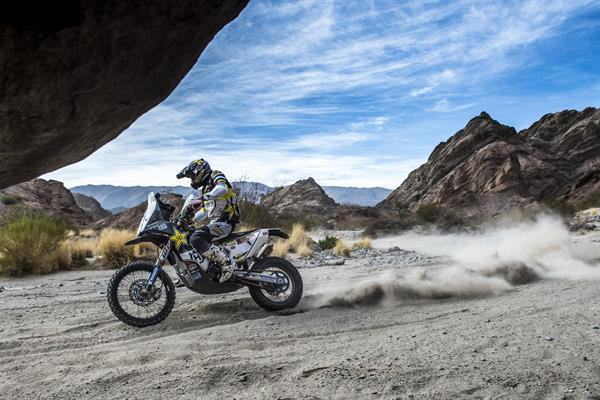 Pablo Quintanilla has moved to the top of the 2017 FIM Cross-Country Rallies World Championship standings after claiming a fourth-place overall result at the Desafio Ruta 40 rally in Argentina.

The Rockstar Energy Husqvarna Factory Racing rider now enjoys a four-point advantage over his closest rival with one race still to be contested this season.

Successfully battling through a very tough week of rally racing in northern Argentina, Pablo brought his FR 450 Rally machine home safely, securing a strong fourth in the Desafio Ruta 40 rally‰Ûªs final overall standings. With his highlight being a runner-up result the Chilean earned on stage three, he wrapped up his week-long adventure by finishing seventh on the rally‰Ûªs fifth and final stage.

Securing the championship lead in Argentina, Pablo got one step closer to successfully defending his FIM Cross-Country Rallies World Championship title. After a short and well-earned break, the Rockstar Energy Husqvarna Factory Racing rider will return to action at the fifth and final round of the 2017 series ‰ÛÒ the OiLibya Rally on October 4/10.

‰ÛÏI‰Ûªm glad we have finished the Desafio Ruta 40, it turned out to be a pretty hard rally." Pablo Quintanilla commented. "It was a tough five stages of difficult navigation and off-piste riding.

"This wasn't my best rally, I am not too happy with my pace over the course of the event. The important thing is I am now leading the championship, which obviously puts me in a good position with only one round remaining.

"I will go home now to recover and then work on my fitness again for the final round in Morocco - hopefully there I can successfully defend my world title.‰Û