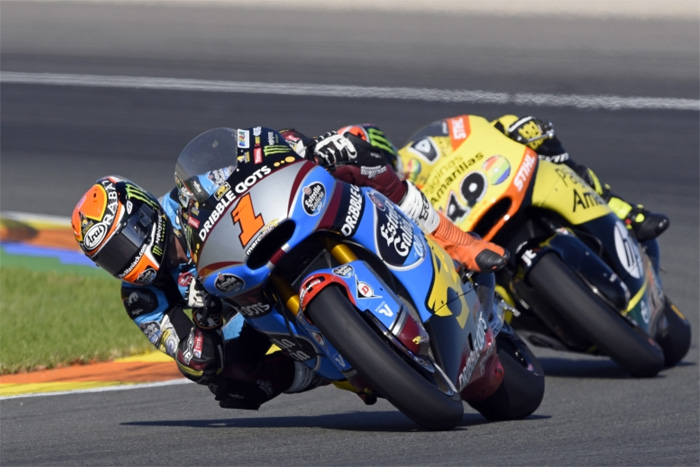 Outgoing Moto2 World Champion Tito Rabat (Estrella Galicia 0,0 Marc VDS Kalex) made a victorious return from injury and a victorious exit from the intermediate class with his 13th win the class at Valencia overnight.

Next week the 26-year-old will commence his MotoGP career with a two-day post-season test session at Valencia.

Rabat dominated the race ‰ÛÒ restarted after an earlier multiple crash ‰ÛÒ resisting mounting pressure from rookie of the year Alex Rins (Paginas Amarillas HP 40 Kalex) who was right behind him until the closing stages. Finally Rins relented, knowing that third place would be good enough to give him second overall ahead of Rabat, who had missed the previous three races due to an arm injury.

Rabat crossed the finish line three tenths of a second ahead of Rins, with Thomas Luthi (Derendinger Racing Interwetten Kalex) a further three seconds further back.

‰ÛÏI‰Ûªm so happy, because I arrived here not knowing if I would be able to ride at the top level." Rabat said. "But I felt good on the bike on Friday and it got better with every day.

"Okay, I‰Ûªm still not 100% fit, but I‰Ûªm fit enough to ride fast. Today was my last race in Moto2 and my last race with my crew, so it was great to say farewell to both with a win. I enjoyed the race; I just pushed on every lap and treated it like a sprint.

"I thought it was LÌ_thi behind me at the end, like last year, but then I looked back and saw Rins, so I knew he was going to challenge, and I knew I was going to hold him off.

"I learnt a lot this weekend; mainly that I need to give myself time to recover after an injury, but also that I maybe don‰Ûªt need to do so many laps at home to be quick. Now we start the next adventure, with the MotoGP test on Tuesday and Wednesday.‰Û