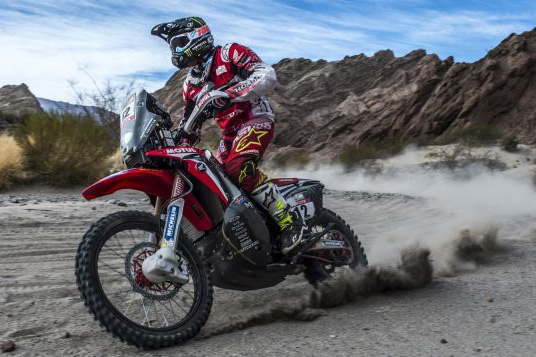 Kevin Benavides has won the 2017 DesafÌ_o Ruta 40 title for the second successive year after some splendid performances by the Monster Energy Honda Team rider over the final stages.

Paulo GonÌ¤alves took runner-up spot on the podium and improves his position in the FIM Cross-Country Rallies World Championship. Michael Metge snatched the final stage victory as the rally wrapped up in San Miguel de TucumÌÁn.

Monster Energy Honda Team continue to accrue titles and were once again on the top steps of the rostrum in an FIM Cross-Country Rallies World Championship event. A week ago the duo of Kevin Benavides and Paulo GonÌ¤alves took second and third spot in the Atacama Rally in Chile; today the same pair upgraded to the top two steps with a triumph in Argentina‰Ûªs DesafÌ_o Ruta 40.

Kevin Benavides capitalized on the advantage gained in yesterday‰Ûªs stage to clinch top honours overall and ride victoriously into TucumÌÁn ‰ÛÒ the final destination of the DesafÌ_o Ruta 40. The local boy won two special stages and controlled the rally from the second stage onwards.

"It was a tough race from the start." Race winner Benavides commented. "I am very happy to get my first victory in a world championship race and to be, also, the first Argentinean to get it, also here on home soil.

"The race got pretty complicated at times, particularly on the first day, where I injured my hand, and then I got hit in the nose by the bike in the dunes. But we took it on the chin and we kept going. I had the pin out from the injury that kept me out of the Dakar.

"I wish to thank the entire Monster Energy Honda Team for the great job they have done in this race, as well as my fellow riders, especially Paulo, who has maintained a great level throughout this week."

The results of the rally give a boost to both riders in their FIM Cross-Country Rallies World Championship positions with just one race ‰ÛÒ the OiLibya Morocco Rally ‰ÛÒ still to run. Paulo lies in second, five points off the leader Pablo Quintanilla; Benavides is fourth, seven points behind the third-placed rival.

The next race for the Monster Energy Honda Team takes place shortly with Peru‰Ûªs Baja Inka which will feature the participation of GonÌ¤alves, Benavides and Metge and will be held from 14th to the 17th September.