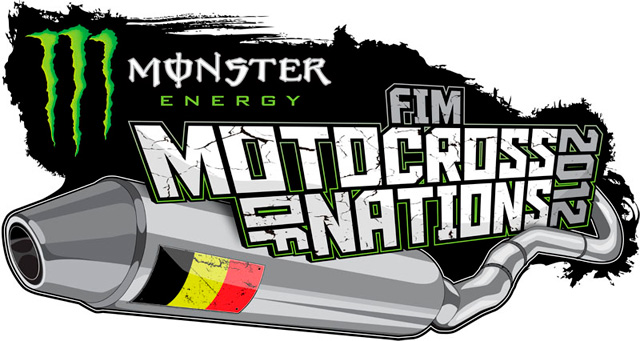 Though the event is quite a long way off, Youthstream who are the organisers of the MXoN and the naming rights sponsor of the event Monster Energy presented the official logo of the 2012 Monster Energy FIM Motocross of Nations.

Youthstream President Giuseppe Luongo explained, "Youthstream is proud to be bringing the MXON, the greatest Motocross event in the world, back to Belgium. After 9 long years the Monster Energy FIM Motocross of Nations returns to the home of Motocross."

"Our goal together with the Moto club of Lommel, the FMB and FIM is to make this year's Motocross of Nations the most memorable ever, offering the best infrastructure, the best venue and the most physically demanding race track, where the best riders in the world will put on an unforgettable show." he continued.

Promoter of the 2012 MXoN Eric Geboers was glad to finally see the face of the event and is looking forward to an unforgettable event come September.

"I'm happy to finally see the "face" of the event we've been working on for quite some time now. It's the start on which we can build our marketing campaign, which we will launch at the first GP of Valkenswaard. said the ex motocross world champion.

"It's not the start of the preparations though, my team and I have worked hard throughout the winter and the past GP's to get the MXoN 2012 shaped up to be an unforgettable event." he added.

"We're proud of Youthstream's faith in our organizing skills to host this magnificent race, and we will make sure fans won't be disappointed when they go home after the event on September 30th. The Monster Energy Motocross of Nations will be an outstanding experience for any race fan!" Geboers concluded.

Jamal Beniloud, marketing director at Monster Energy is excited about the 2012 event and the festival atmosphere that the race brings.

"The Motocross of Nations is one of the biggest festivals in motorsport thanks to the passion of the fans and the spectacle they generate" said Beniloud. "Watching the best talent in the world line up in front of all that colour and noise gives us at Monster Energy just the same buzz."

"It's a tribute to the sport that it can generate so much anticipation before the season even starts and no doubt the 2012 Motocross of Nations will bring us even more excitement.'" he concluded.

This year's Monster Energy FIM Motocross of Nations is taking place in Lommel, Belgium, on the 29th and 30th of September weekend.

Main Image: the official logo of the 2012 Monster Energy FIM Motocross of Nations