Noriyuki Haga to join Brookes and Tsuda at Suzuka 8 Hour 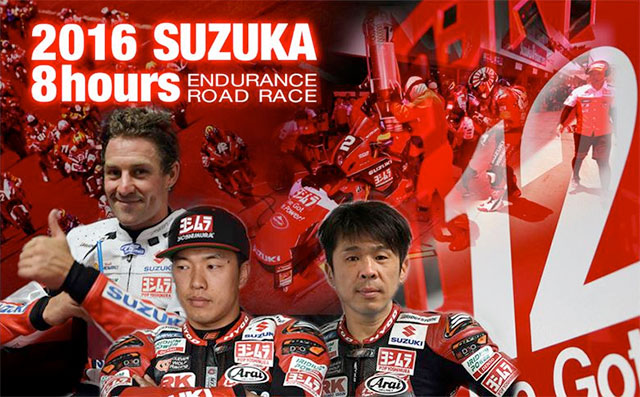 Tsuda has been the regular Yoshimura Suzuki rider in the All Japan Championship and Suzuka 8 Hour since 2013. He has continued to post solid results this year and improved both his riding and mental approach and remains the nucleus of the Yoshimura Suzuki team.

Brookes worked with the Yoshimura Suzuki team at the 2013 Suzuka 8 Hour event, finishing second despite an unfortunate crash when he was recovering from a pit lane speed limit penalty by his team mate. The Yoshimura team were impressed by his fighting spirit at that event. Brookes went on to win the hotly contested British Superbike Championship in 2015.

Haga is well known throughout the world of motorcycle racing and the addition of his vast experience and riding skill are certain to boost the team's chances in this year's epic 8 hour event. Haga is currently competing in the ARRC Supersport 600 series aboard the Team Kagayama Suzuki Asia GSX-R600.

All three riders are highly motivated and aiming for the podium in the event.

In the past few years, the official factory teams have returned to the Suzuka 8 Hour race and it is more competitive than ever, so the Yoshimura Suzuki Shell ADVANCE Racing Team know that they must be ultra-competitive to take the victory.

The Yoshimura tuned Suzuki GSX-R1000 has been improving throughout the year and the team firmly believes in its chances for victory in the 39th Suzuka 8 Hour event that takes place at Suzuka in Japan on the 31st of July 2016.