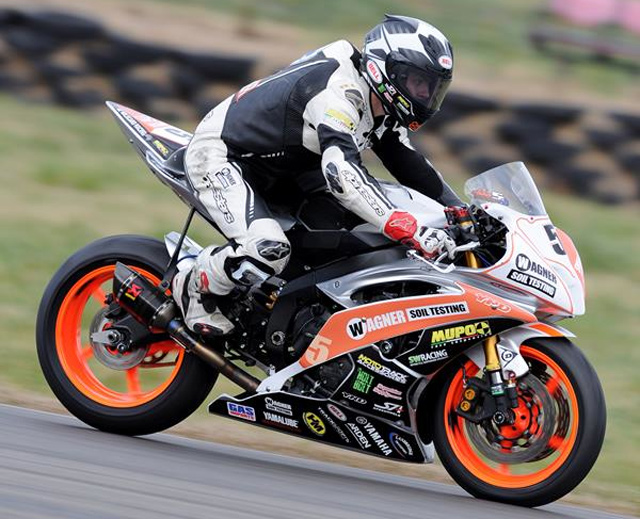 A nightmare day at Wakefield Park has seen Maxima Yamaha rider Aaron Morris give up a huge lead in the Supersport class at round five of the 2014 YMF Loan Australian FX-Superbike Championship.

In the opening race of the day, Morris used pole position to his advantage by taking the lead into the first corner from Wagner.

By the end of the opening lap, the pair had already put a 1.633 second gap on third placed Aaiden Coote, while another of the series‰Ûª leading contenders Callum Spriggs (Allsite Concrete Cutting) was back in fifth.

By the end of lap three the gap between second and third was already over five seconds as Morris and Wagner rode out of site from Spriggs, who had climbed into third.

Drama then unfolded on lap five, when the previously flawless Morris lost control of his bike at turn 8, sending the machine somersaulting off the track and leaving the Maxima Yamaha rider lucky to walk away unharmed.

From there Wagner eased his way to a convincing race win from Spriggs, who was 4.615 seconds behind when the chequered flag was raised.

Jay Presepio finished the race a further 15.741 seconds behind but a penalty incurred pushed him back down to seventh.

An unfamiliar sight as riders lined up on the grid for the second race with Morris having to start from the back of the field.

As they jumped off the line, Spriggs got the perfect start, leaving Wagner and Blair in his wake.

After several attempts to get past Blair, Morris finally found a way through at the final turn of lap four and set about reigning in the five-second gap to Wagner in second.

Spriggs and Wagner in the meantime were locked in an intense battle for first ‰ÛÒ Wagner getting past at the front of the final turn on lap five, before Spriggs got the lead back coming out of the very same corner.

Wagner managed to regain and hold the lead on lap seven while the unthinkable again happened to Morris.

As he ran off the track, the championship slipped out of his grasp ‰ÛÒ Morris managing to re-enter the track but was way back in second last position.

He did manage to climb back into eighth spot by the time the race was finished and gain some important championship points, but his huge buffer leading into the round was all but gone.

Wagner held on to finish the race in first and with Spriggs coming in second the class had become an even battle between three.

Spriggs shot to the front off the start line in the third race for the day, before Wagner wrestled control of the lead at the final corner of the opening lap, as the bikes approached the straight.

Morris had worked his way up from eighth to third on the opening lap before passing Spriggs into second at the end of the straight on lap two.

He then set about catching Wagner who had opened up a 1.113 second lead at the end of the second lap, but the Yamaha rider increased the gap ‰ÛÒ more than two and a half seconds ahead of Morris after five laps.

It was a battle between two as Spriggs fell a further five seconds behind, and despite the expectations a serious challenge from Morris on Wagner never eventuated.

Wagner rode on to make it three from three for the day, with Morris finishing the race in second and Spriggs in third.

Wagner took the round honours ahead of Spriggs, while Blair finished the round on the podium in third.