NIGHT of the JUMPs heads to Hamburg

On the 3rd of June 2017, the longest running Freestyle Motocross Sport Series will take over the Hanseatic city of Hamburg. 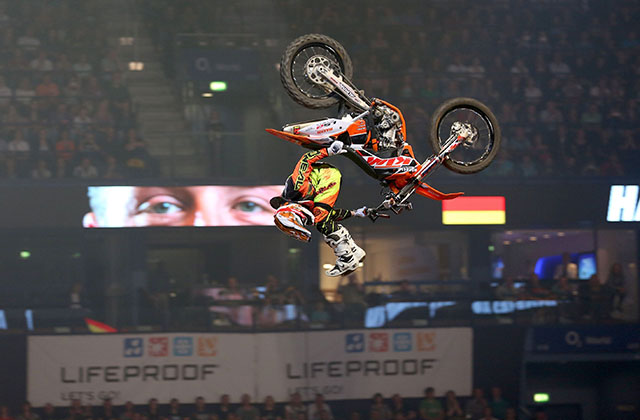 Hannes Ackermann
Germany will be represented by their top three riders including Luc Ackermann who made his successful comeback at the NIGHT of the JUMPs event in Krakow with a stunning 3rd place and will be looking to return to the podium in Hamburg. His older brother Hannes Ackermann will be celebrating his comeback in the BarclayCard Arena after six months out with injury. The crowd can expect some huge tricks from the ThÌ_ringen rider who won the NIGHT of the JUMPs contest in Hamburg in 2015. The Berliner, Kai Haase will round out the ranks of the German riders.

The French duo of former World Champions, Remi Bizouard and David Rinaldo will be looking to improve their results for the season. Bizouard, especially will be looking to prove that his Flair 540 is on lockdown after unveiling it for the first time at NIGHT of the JUMPs in Munich. However after breaking his gear lever on his second trick of his run, the competition was over for him and this will be the fuel his fire to return to Hamburg and disrupt the podium positions.

The Czech flip combo king, Petr Pilat (CZE), will be wanting to return to the final 6 after recent poor results. The runner-up to the World Championship in 2010, Brice Izzo (FRA), Leonardo Fini (ITA) will round out the rider‰Ûªs field plus Massimo Bianconcini (ITA) who will compete in the Maxxis Highest Air and LifeProof Best Whip competitions.

For the sixth time, NIGHT of the JUMPs will enter the Hanseatic Port city with the longest running Freestyle MX sports series in the world, with riders who are prepared to put everything on the line to take home valuable points in the World Tour Championship. This will be a motorsport event not to be missed for any adrenaline junkie in Hamburg.