NIGHT of the JUMPs Head to Jerez This Weekend 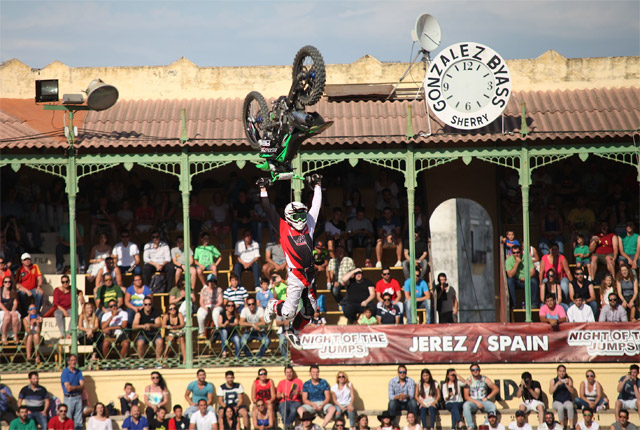 The chant of Viva Espana will resonate loudly in Jerez when the NIGHT of the JUMPs returns for the second half of the 2016 season on the 30th of September. For the second time, the world‰Ûªs biggest FMX sport series returns to the Andalusian port city of Jerez.

The seventh competition of this year‰Ûªs FIM Freestyle MX World Championship series will be the prelude to the outdoor events for 2016. Together with the two Chinese rounds in late October in the football stadium of Shenzhen, there are three 2016 summer competitions outdoors. Unlike the Spanish premiere in 2015, this year‰Ûªs event will not be held in the Bullring in Jerez but in the football stadium instead.

Two of the biggest Spanish superstars, Dany Torres and Maikel Melero will be favourites to finish the event with a podium position. In particular, the reigning World Champion Melero is eager to win his home nation round after last year‰Ûªs huge crash in training where he left in an ambulance from the bullring.

Marc Pinyol will complete the trio of Spanish riders. If Pinyol can bring his ‰Û÷Inside Roll‰Ûª body varial, he will have a good chance to make it to the final round.

Three former FIM World Champions, Remi Bizouard, David Rinaldo (both from France) and Libor Podmol (CZE) will also make their presence known. With their Body Varials and Flip Combinations, they will risk everything to snatch the victory from the local Spanish heroes. For Bizouard it is even more important that he gets solid results to put as much pressure on Melero for the overall 2016 championship fight. Currently the little Spaniard is leading the overall standings with 120 points and Bizouard is sitting 20 points behind on 100.

Brice Izzo (FRA) will be the third Frenchman to line up in Jerez. The Australian Rob Adelberg and Petr Pilat from Czech Republic will complete the field of riders. In the Maxxis Highest Air, Massimo Bianconcini will return to try take another victory for his overall account for 2016 and try win back the Highest Air Championship.