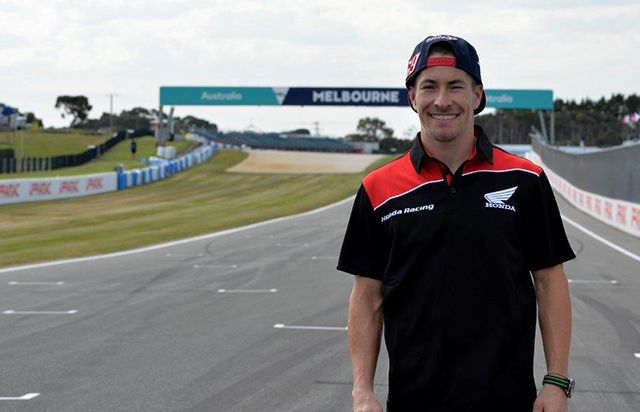 American Nicky Hayden wants the 'double' ‰ÛÓ a world superbike title to sit alongside the MotoGP trophy he won in such exhilarating circumstances in 2006.

And the crusade officially begins next week when the 'Kentucky Kid' joins the Dutch-based Ten Kate Honda team in Spain to begin testing the CBR1000R SP he'll race in the 2016 FIM Motul Superbike World Championship, with the first round to take place at Victoria's Phillip Island from February 26-28.

Other than Italian Max Biaggi, Hayden is the highest profile racer to make the switch from MotoGP to the production-based WSBK title, and at 34 years old he still has a burning ambition to succeed at world championship level.

"I still enjoy riding motorcycles, and the challenge of becoming the first rider to win both titles appeals to me," said Hayden at the recent Phillip Island MotoGP round. "It's going to be a lot of fun, notwithstanding that the competition is going to be no easier than here (MotoGP).

"However I am not getting ahead of myself: I have to get to the first test and see what the Honda is like before I say too much. I know the team has some ideas on what it wants to do with the engine and electronics, but until I get there and understand where I need to improve with that bike it's all speculation.

"And as far as rumours about an all-new bike for 2017, Honda's definitely got the technology so there's no reason why it can't happen. But I need to focus on 2016 first, and trust that HRC is going to come up with a weapon."

Not only will Hayden be racing a production-based bike for the first time since he won the American superbike title in 2002, his opposition will also present a new frontier.

"There might be one or two riders on the grid that have raced before; I know Johnny Rea for one did a couple of wildcards in MotoGP," said Hayden. "But until I line up with the new guys I won't know my full potential, but it's a world championship so there will be stiff competition.

"Either way, I am really looking forward to joining the world superbike paddock and getting to know those guys."

Hayden replaces Frenchman Sylvain Guintoli in Honda's factory team, and his teammate will be Dutchman Michael van der Mark. The pair will begin testing at Aragon on November 16-17 alongside the factory teams from Ducati and Yamaha.

The pre-season then continues at Jerez on November 25-27 before the teams go into recess during December and most of January.

Hayden wound up his 13-year MotoGP career at Valencia last Sunday. Over the journey, he raced Hondas for eight years (six in the factory team) and Ducatis for five years, with the obvious highlight being the 2006 title after he erased a points' deficit to Valentino Rossi in the final round.

"Winning the world championship was something special, something different," said Hayden. "That was the one I wanted, that was the goal.

"Winning my home two GPs at Laguna Seca were also wonderful experiences when I was in MotoGP, and going back to Laguna Seca in world superbike mode will be special ‰ÛÒ it's my favourite track in the world. I just love the layout and the atmosphere.

"Of course, I would have liked more highlights in MotoGP, but I got the one I really wanted."

Kawasaki-backed Rea will defend the world superbike title on an updated ZX-10R in 2016, and his challengers will include teammate and past champion Tom Sykes, Ducati pair Chaz Davies and Davide Giugliano, Yamaha duo Guintoli and Alex Lowes, Van der Mark ‰ÛÓ and now Hayden. Yamaha returns to the series after absence of four years with its YZF-R1M.