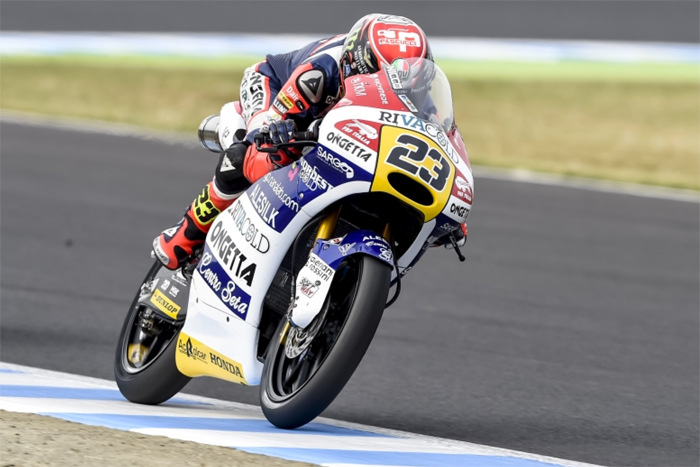 The first race of the day got underway on a soaking track, the 19-year-old Italian immediately seizing the initiative and working hard in the early laps to build a four-second lead over his pursuers.

As the race ‰ÛÒ shortened from 20 laps to 13 laps ‰ÛÒ went on, Antonelli‰Ûªs rivals did pile on the pressure, Miguel Oliveira (KTM) reducing the gap to 1.053 seconds at the flag. There were several fallers as riders chased Antonelli.

In the end, Antonelli (who scored his first win at Brno in August) was joined on the podium by Oliveira and Jorge Navarro (Estrella Galicia 0,0 Honda NSF250RW) who had a charging ride from 13th on the first lap to take third place, adding to his excellent second-place finish at Aragon two weeks ago.

World Championship pleader Danny Kent (Leopard Racing Honda NSF250RW), who fell at the last corner at Aragon, rode a very intelligent race today. Swamped by rivals in the early stages, he was down in 16th for the first couple of laps, but he kept a cool head and worked his way through the pack, finally passing his only serious title rival Enea Bastianini (Junior Team Gresini Moto3 Honda NSF250RW) on the final lap.

The pair crossed the line sixth and seventh, giving Kent a chance of securing the crown at Phillip Island next Sunday.

John McPhee (SaxoPrint RTG Honda NSF250RW) and Efren Vazquez (Leopard Racing Honda NSF250RW) completed the top ten. Fabio Quartararo (Estrella Galicia 0,0 Honda NSF250RW) did not start the race due to lingering problems with his leg injury.
‰ÛÏIt has been an amazing win and after the victory in Brno it was important to get a confirmation in order to give continuity to results." Race winner Antonelli commented. "Today I pushed from the first lap until the end.

"I got the gap at the beginning of the race and I managed it until the finish line. A perfect weekend, first from free practices and a great feeling with the bike. I am really happy and I thank all the team.‰Û