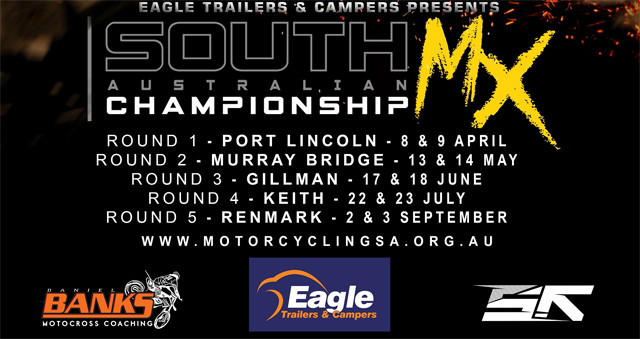 The 2017 SA State Motocross Championship will be officially known as the ‰Û÷2017 Eagle Trailers & Campers South Australian MX Championship‰Ûª after the company confirmed their naming rights partnership with the series.

In addition to the new sponsorship, entries for the opening round of the new Championship at Port Lincoln to be held on the 8th and 9th of April have officially opened.

Eagle Trailers & Campers, an Australian owned and operated company that specialises in the sale of trailers and hard floor campers in all capital cities including Adelaide, Perth, Sydney, Melbourne and Brisbane have come on board as the new naming rights partner for the expanded five round season which will travel to Port Lincoln, Monarto, Gillman, Keith and Renmark.

Managing Director of Eagle Trailers & Campers, Brent Boardman is excited at the opportunity to partner with the South Australian MX Championship, identifying it as a strong chance to further grow the company‰Ûªs brand into a new market, the state‰Ûªs most supported motorcycle racing Championship.