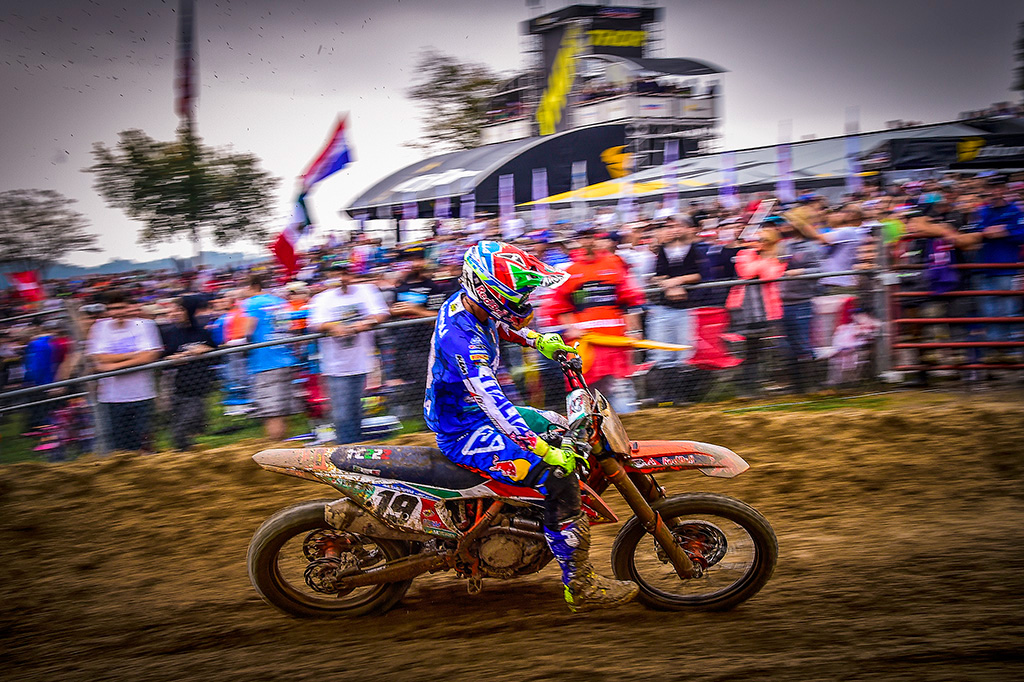 The hills of the Michigan circuit filled with thousands of wildly passionate and patriotic motocross fans creating an atmosphere that only the MXoN can provide.

Qualifying in the top spot was Team Netherlands who scored 4 points with Jeffrey Herlings, Calvin Vlaanderen, and Glenn Coldenhoff. Going to the line second tomorrow will be Team Italy, Antonio Cairoli, Michele Cervellin, and Alessandro Lupino who scored 5 points along with Team France‰Ûªs Gautier Paulin, Dylan Ferrandis, and Jordi Tixier.


Today‰Ûªs racing was epic and full of drama as all of the thirty country‰Ûªs teams competed for the top 19 spots to guarantee a place in tomorrow‰Ûªs final races. Three different qualifying races, one for each category, followed the morning‰Ûªs Free Practice sessions. Of the three race results the two best are counted into the nations classification and the 19 teams with the lowest scores are placed directly into the main races tomorrow while teams from 20th on will have one last chance to compete via winning the B-Final tomorrow morning.

The MXGP category will likely be the most watched class tomorrow with a long list of stars headlined by the Netherlands Jeffrey Herlings, USA‰Ûªs Eli Tomac, Germany‰Ûªs Ken Roczen, and Italy‰Ûªs Antonio Cairoli.

Herlings went straight to Pit Lane after the start crash and after a few adjust was back on track in dead last. Meanwhile Team Spain‰Ûªs Jose Butron was fighting to hold on to 3rd while under pressure from the #1 of Team France‰Ûªs Gautier Paulin. By the fifth lap Butron was passed by Paulin, Searle, and Tomac while Herlings was already up to 11th.

Cairoli impressively pulled away from Roczen lap after lap as Roczen did the same to Paulin. On lap 8 Herlings was up to 5th while fans struggled to find Tomac who previously held the position. Tomac was then discovered at the bottom of the circuit near ‰ÛÏLaRocco‰Ûªs Leap‰Û 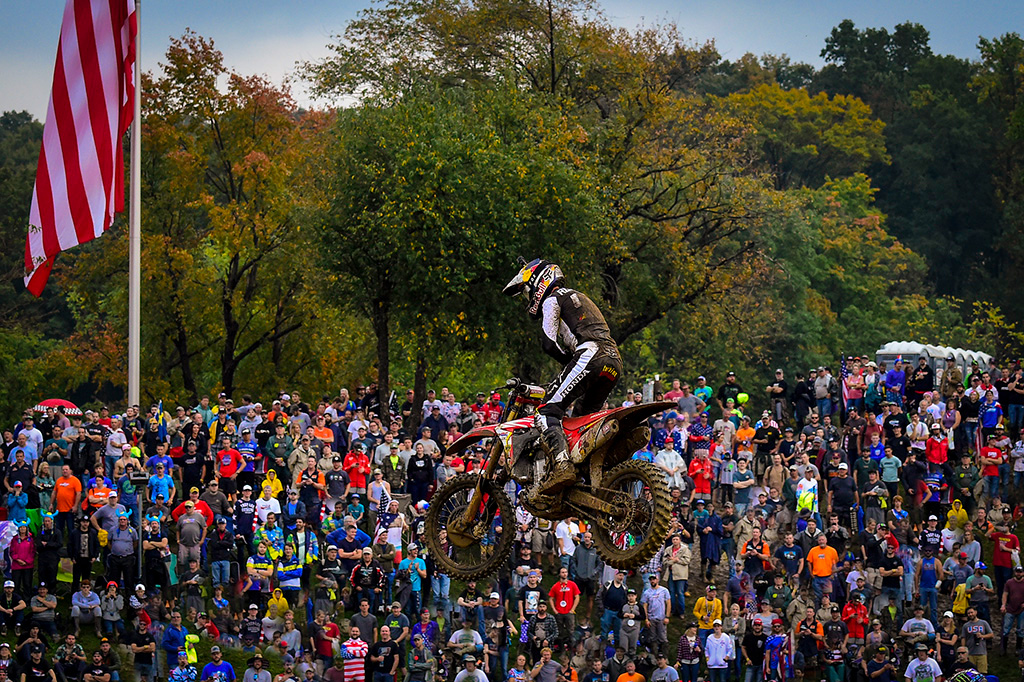 Ken Roczen helped Germany to 4th with a solid second in MXGP. Photo: Youthstream
Herlings went on to take not only 4th from Searle but also 3rd from Paulin on the final lap while Cairoli took the win over 21 seconds ahead of Roczen. Paulin took 4th and Searle put team GB into the final spot of the top 5 while Tomac took 29th.

‰ÛÏI am really happy to be here with Italy, it is good motivation for me," Cairoli said. "I think we have a good team, of course we want to win but our goal is to finish on the podium, this is the most realistic goal. It was a very good Qualifying race and I hope tomorrow we can get another good start.‰Û 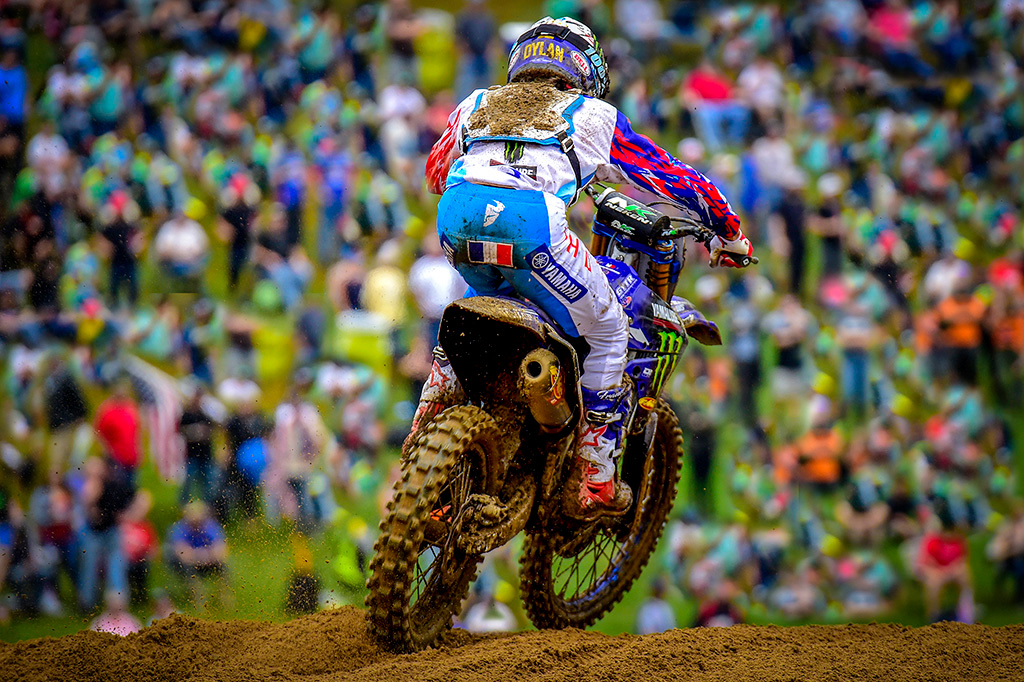 Frenchman Dylan Ferrandis took the MX2 class win.
The second race out in front of the MXoN crowd was the 250‰Ûªs of MX2 Qualifying. Team Germany‰Ûªs Henry Jacobi found himself in the lead with Team USA‰Ûªs Aaron Plessinger and Team Australia‰Ûªs Hunter Lawrence hounding him for the lead.

Team France‰Ûªs Dylan Ferrandis was in 4th just ahead of Team Italy‰Ûªs Michele Cervellin and Team Spain‰Ûªs Jorge Prado at the end of the first official lap. Ferrandis made moves quickly gaining a position in each of the next 2 laps to run in 2nd behind the new leader Plessinger.

The early leader, Jacobi, was shuffled back to 4th behind Lawrence and just ahead of Cervellin. After 4 laps in 2nd position Ferrandis took over the lead as the American lost control and crashed off one of the triple jumps. Plessinger rejoined the action in 7th but then dropped even more positions after stopping in Pit Lane. 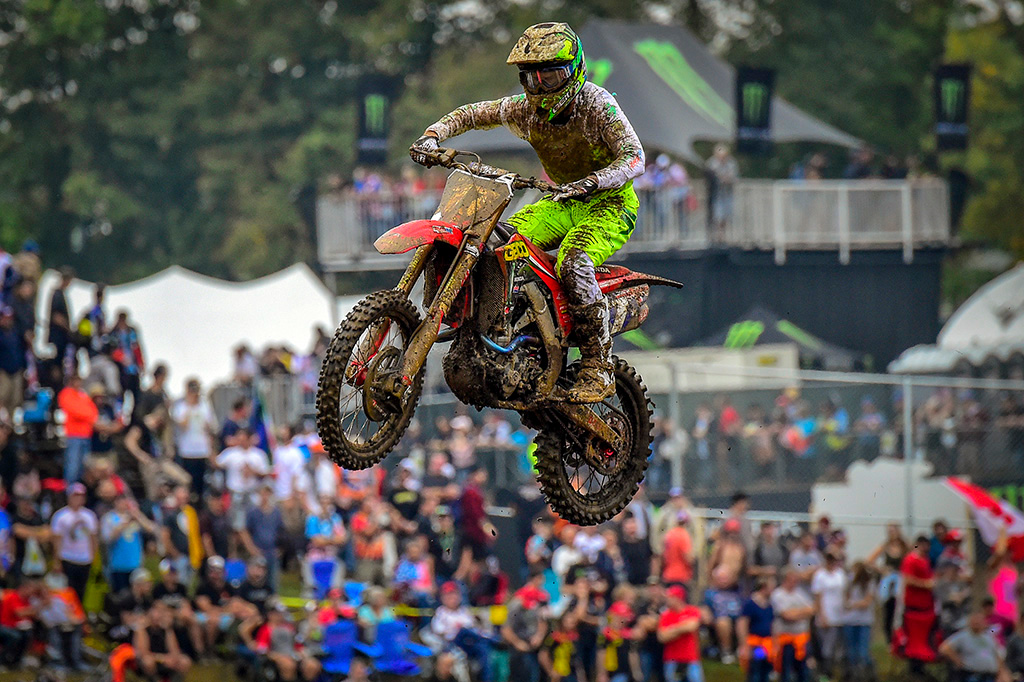 Hunter Lawrence was the highest placed Aussie finishing the MX2 race in second and helping Australia to 5th place.
The lead of Ferrandis was heavily challenged by the strong ride of Lawrence but the Frenchman held on to win the race just 0.7 seconds over the Aussie. Third place went to Germany‰Ûªs Henry Jacobi with Cervellin 4th and Prado 5th.

‰ÛÏI am really happy, I had a good race and a good start, I made a small mistake in the mud...but it is racing and I won the race which is what is important for the team and we are in a good position for tomorrow," Ferrandis said. 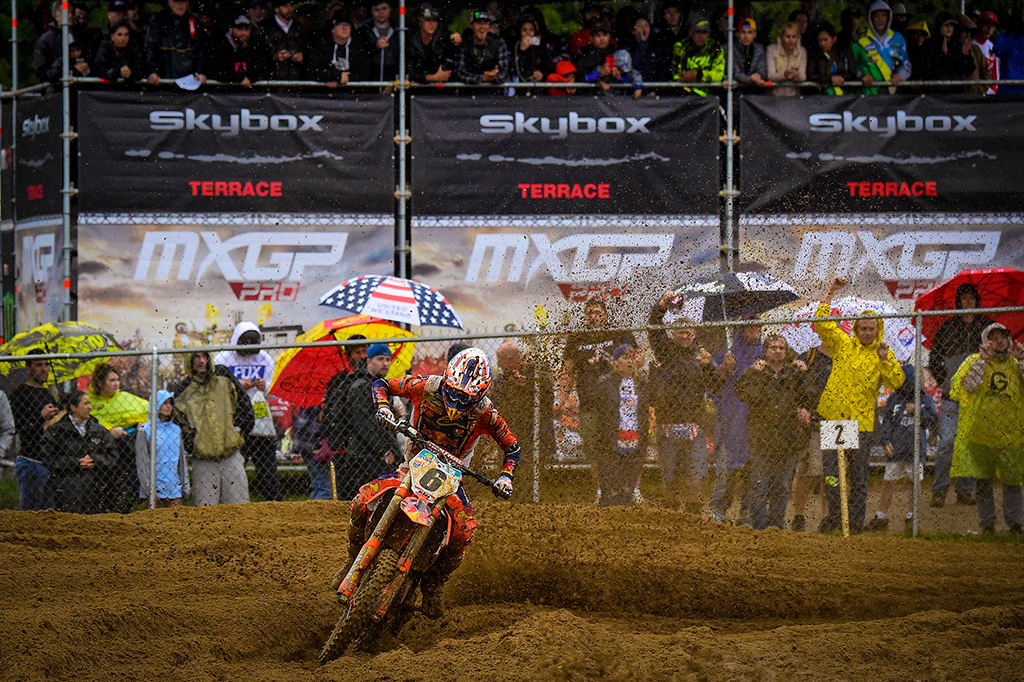 Glenn Coldenhoff took the Open class win, helping the Netherlands to the number one spot in qualifying. Photo: Youthstream
The final event on track today was the Open category‰Ûªs qualifying and the pressure was on Team USA‰Ûªs Justin Barcia after the prior mishaps of his fellow countrymen. Coming into the race the American team depended on a top ride from ‰ÛÏBam Bam‰Û 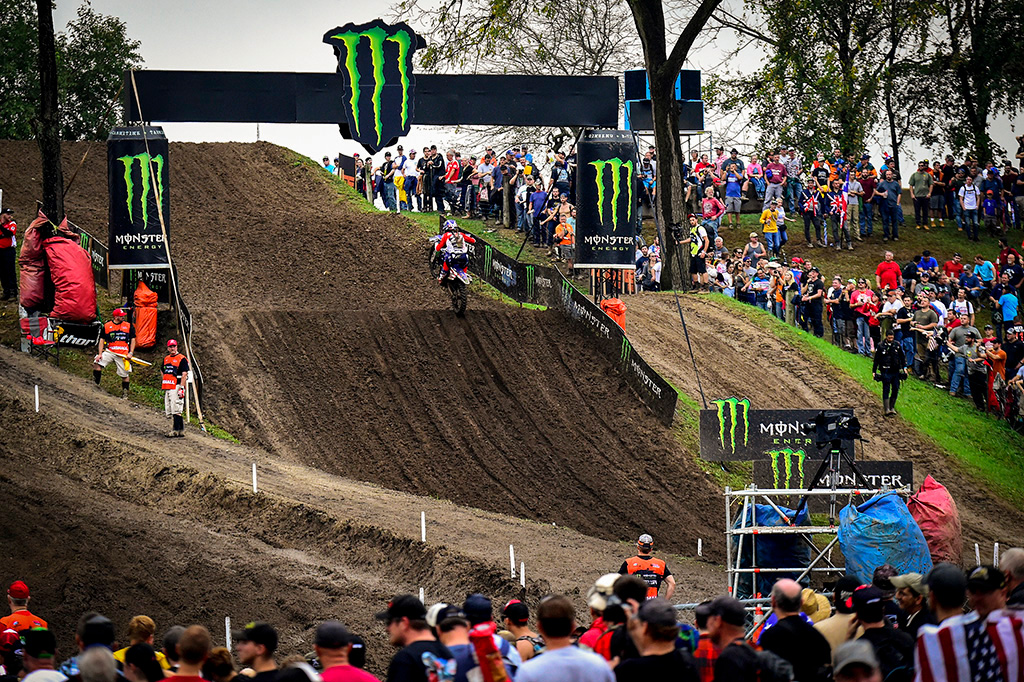 With Team-mates Eli Tomac and Aaron Plessinger having bad races it was left to Justin Barcia to stop the USA going to the B Final. He finished second to achieve the goal.
Barcia fought to catch and pass Coldenhoff but though he was able to catch the Dutchman he wasn‰Ûªt able to make a pass. Coldenhoff took the win but Barcia‰Ûªs clutch performance propelled team USA from outside the top 20 up to 9th position for tomorrow.

Belgium‰Ûªs Van Horebeek took third which helped the team to qualify 13th after Desalle had a bike issue in MXGP and Jago Geerts took 18th in MX2 after a crash. Rounding out the top 5 of Open was Seewer and team Estonia‰Ûªs Harri Kullas.

"I didn't have a great start but was able to make some passes in the first few laps, Max Nagl made a mistake and I took the lead... in the end it was a good race and we are on pole for tomorrow so we are looking good." Coldenhoff said.

Australia's Mitch Evans was impressive despite his finishing position of 15th after crashing on the start straight and having to make his way through the field. 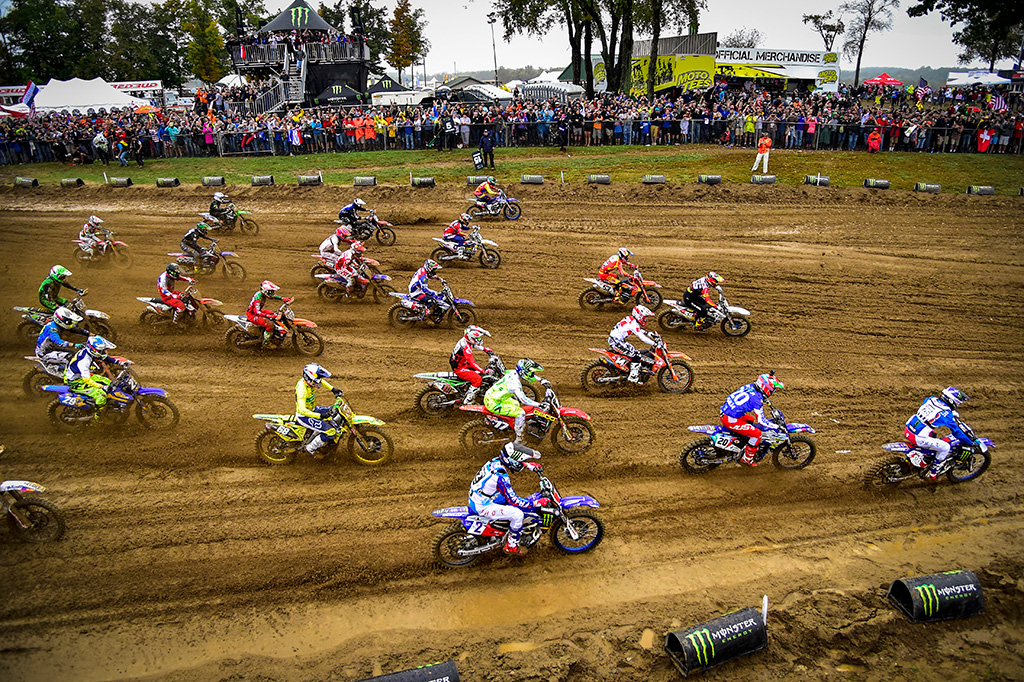