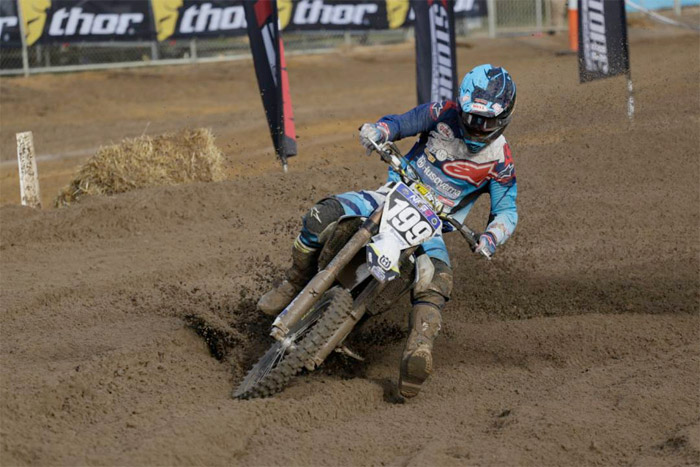 It was yet another action packed round of racing at Wanneroo in Western Australia today, with Husqvarna mounted Nathan Crawford taking a pivotal round win, and snatching up the Motul MX2 championship lead at round five of the Motul MX Nationals.

When the MX2 competitors headed out for qualifying this morning, it was local Jayden Rykers who emerged as the early man to catch with the fastest qualifying time of a 1:44.008, while Husqvarna‰Ûªs Crawford and Honda mounted Webster collected the second and third quickest laps.

When gates dropped on race one, spectators were five rows deep on the fence-line, and riders were treated to a full house for their first moto of the day. It was CRF Honda Racing‰Ûªs Webster who secured the first MX2 MXstore holeshot, ahead of Rykers and KTM Motocross Racing Team‰Ûªs Caleb Ward.

From there, moto one was set up to go down to the wire. With Webster and Rykers holding valuable local knowledge of the tack, and Ward who is known as a sand specialist, all putting on a performance for the MX2 top spot.

After three laps, race leader Webster began to come under fire from KTM mounted Rykers, the pair chopping and changing line choices in order to make up time ‰ÛÒ Ward also began to feel the pressure of lightening fast Crawford who was attempting to make his dash for third position.

From there, the front four, Webster, Rykers, Ward, and Crawford all began to check out on the field, while Serco Yamaha‰Ûªs Wilson Todd also joined the party, tagging on to Crawford‰Ûªs rear wheel in fifth position.

By the time Motul MX2 competitors had reached the ten-minute mark in moto one, there had been little change to the running order, with Webster continuing to lead from Rykers and Ward, while Todd made his way in to fourth position followed by Crawford and DPH Motorsport‰Ûªs Jed Beaton.

With five minutes on the clock remaining, no one looked as if they could get near Western Australian Webster, and despite fellow local Rykers‰Ûª every attempt to make a pass, the KTM mounted youngster could not make a challenge for the lead stick.

So when the Motul MX2 class received the last lap board, Webster looked in control out in front, while Rykers and Ward continued to race for the final podium positions ‰ÛÒ Despite an earlier mistake, Crawford made his way back in to fourth, while Yamaha‰Ûªs Todd held down fifth.

And when the chequered flag flew, it was CRF Honda Racing Team‰Ûªs Webster who capitalised on a home track advantage, crossing the line with his first moto victory for the day, ahead of Rykers in second, while KTM‰Ûªs Ward wrapped up race one in third.

When moto two got underway, it was Husqvarna‰Ûªs Crawford who edged out Ward to take the second holeshot of the day, but it didn‰Ûªt take long for Ward to make his presence known, and after three laps Ward‰Ûªs charge to the front was unstoppable ‰ÛÒ the KTM rider finding the perfect line, passing Crawford to move in to the race lead, relegating the Husqvarna rider to second position.

By the time the Motul MX2 class reached the half way mark in moto two, Ward continued to dominate out in front, while Crawford, Rykers and local Webster went head to head for the remaining podium positions. Raceline Pirelli KTM‰Ûªs Dylan Wills held down an impressive fifth, while Serco Yamaha‰Ûªs Wade Hunter, Dean Porter and Hamish Harwood occupied sixth, seventh and eighth positions.

With five minutes left of the clock, there was little change to the running order, the only passes to note being from Hunter and Porter who both managed to get by Wills to slot in to fifth and sixth positions.

And when the chequered flag flew for the second time, it was Ward‰Ûªs turn to celebrate ‰ÛÒ taking an emphatic moto two victory from Crawford who finished in second, while Rykers managed to snatch away third from a hard charging Webster who wrapped up moto two in fourth.

When the final moto for the Motul MX2 class kicked off this afternoon, spectators watched on to see whether a third rider would take a race victory at Wanneroo ‰ÛÒ And once again it was Husqvarna‰Ûªs Crawford who shot off to the early race lead, ahead of the consistent Rykers and Ward in second and third positions.

After only two laps, Beaton who started moto three in fourth made his presence known, passing both Ward and Rykers on the same lap to move in to second position, and begin his chase for race leader Crawford.

It was going in to lap five that Beaton executed a successful pass on Husqvarna‰Ûªs Crawford, taking the race three lead, and allowing Crawford and Rykers to fight for second position behind him.

From there DPH Motorsport‰Ûªs Beaton looked ultra comfortable in the rough and deep Wanneroo conditions, managing to keep Crawford at bay and attempting to set himself up for the final race victory.

However, when riders came past the finish line to receive the last lap board for the final time, it was Crawford who had made a pass back on Beaton to secure the lead once again with one lap to go, followed by Rykers, Ward and Porter.

And when bikes crossed the line for the final time, the determination of Husqvarna mounted Crawford saw him awarded with his first and final race win of the day, while Beaton was forced to settle for second, and Rykers remained consistent finishing in third.

With three different race winners across three motos in the Motul MX2 class, consistency was the key when the overall results were tallied, and it was Crawford who‰Ûªs 4,2,1 results saw him awarded with his first round victory for 2016 as well as the MX2 red plate, while Ward wrapped up round five in second, followed by local Western Australian Rykers who concluded the round in third.

The Motul MX Nationals will now commence the mid-season break, with the sixth round of the championship, being held at Nowra in New South Wales on July 3, 2016.