Nagl and Herlings on pole in Valkenswaard 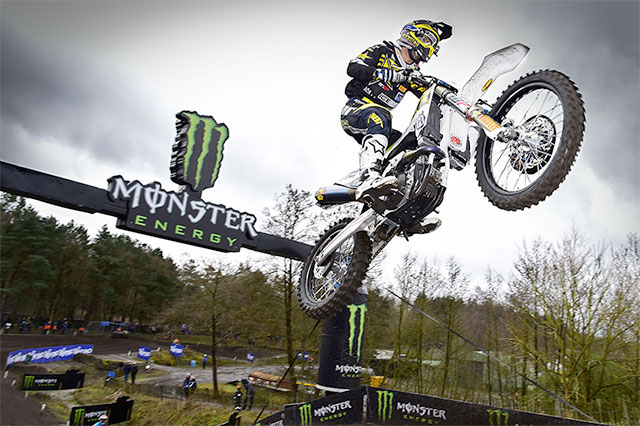 Early morning lashings of rain made for a sloppy start to the third round of the FIM Motocross World Championship but by mid-morning the rain had cleared and was replaced with overcast skies, which made for near perfect conditions at Valkenswaard.

Rockstar Energy Husqvarna Factory Racing‰Ûªs Max Nagl looked in his element as he took his first pole position of the year in MXGP, while the king of sand Red Bull KTM Factory Racing‰Ûªs Jeffrey Herlings did what was expected of him and blitzed the field for his third consecutive qualifying heat win of the season in MX2.

It was an epic start to the European Championship EMX250 season as the rookie, Rockstar Energy Husqvarna Factory Racing‰Ûªs Conrad Mewse, held off a last minute charge from the Australian rookie, Monster Energy Kawasaki‰Ûªs Hunter Lawrence, for the first race win. Meanwhile the European Championship EMX300 Presented by FMF Racing also had their first moto, which was won by the home soil hero Mike Kras.

Also flying the flag for Holland, Nancy Van de Ven had the fans going mad on the fence line as she capitalized on an error from the early race leader and WMX red plate holder Courtney Duncan and ran away for a convincing race win here at round two of the FIM Women‰Ûªs Motocross World Championship.


Tight and unpredictable racing is to be expected from this awesome venue in Valkenswaard, which always attracts thousands of enthusiastic motocross mad fans who come here knowing they‰Ûªre in for some gnarly bar-banging action.

There was no doubt precision was the key today with a lot of tricky edges surfacing in the black sand. Initially, it was Strijbos who was on form as he ripped around the outside of Nagl at the end of lap two and instantly pulled a gap while Gajser did the same thing half of a lap later.

Honda Gariboldi‰Ûªs new prodigy did a great job at holding off MXGP‰Ûªs finest before a few little errors allowed Nagl back through with Simpson also capitalizing on a bobble or two, for third.

Although he lost a couple of spots, most eyes remained on the rookie, Gajser, as the defending champ, Febvre, and the legend, Cairoli, knocked at his door. Amidst all the commotion for third, the race leader Strijbos hit a massive kicker on a down hill section of the track and crashed. Nagl then inherited the lead while Strijbos dusted himself off in sixth.

As the nail biting race came to a close, Nagl had his lines dialed and pulled away to win by seven seconds over Simpson who had to deal with a fired up Febvre who attempted to work his magic for the runner-up position.

At the checkers Febvre had to settle for third while Gajser held off the wrath of Cairoli who rounded out the top five ahead of his teammate and crowd favorite Coldenhoff.

The early race leader and man fastest in Timed Practice, Kevin Strijbos, finished up in seventh.

Feeling the cold harder than most was Ben Townley. The New Zealander struggled throughout the day as the after-effects of a virus left the former winner of this Grand Prix without any energy. ‰Û÷BT‰Ûª managed to endure the 30-minute and two-lap heat race and circulated to 21st position.

‰ÛÏI got ill at the start of the week and I had to take a lot of medication to get better. I feel absolutely ‰Û÷zumped.‰Ûª I don't have any energy and do not feel good at all. I wasn't actually going to ride today. We‰Ûªll see how I feel tomorrow," Townley said.


A unique ‰Û÷S‰Ûª bend first corner always makes for an interesting start which seems to work in favor of Wilvo Standing Construct Yamaha‰Ûªs Aleksandr Tonkov who replicated what he did last year and took the holeshot. Right off the bat Red Bull KTM Factory Racing‰Ûªs sandman Jeffrey Herlings was in a dangerous position exiting turn one, second place, and he made light work of the Russian as expected.

Unsurprisingly ‰Û÷The Bullet‰Ûª, Herlings, made the square edged sand circuit look silky smooth as he cruised home for his third consecutive pole position of the year.

Meanwhile, Red Bull KTM Factory Racing‰Ûªs Pauls Jonass was all over Tonkov like a rash but couldn‰Ûªt find an opening, which allowed a couple of riders to creep up on him. One of which was the Belgian who hit a career milestone at the MXGP of The Netherlands last year, Kemea Yamaha Official MX Team‰Ûªs Brent Van doninck. Van doninck was looking fierce as he balanced his attack and defense mechanisms, pressuring Jonass while holding off HSF Logistics Motosport‰Ûªs Calvin Vlaanderen.

In the latter stages of the race silly mistakes started to get the better of Jonass, which saw Van doninck eventually nail third with an easy pass on the entrance of the waves. Unfortunately, a lap later, it was all over for Van doninck when his bike went pop. That gave Jonass third place in the MXGP of Europe MX2 Qualifier behind Herlings and Tonkov while Vlaanderen faded back but maintained fourth ahead of Team Monster Energy Kawasaki‰Ûªs Petar Petrov.