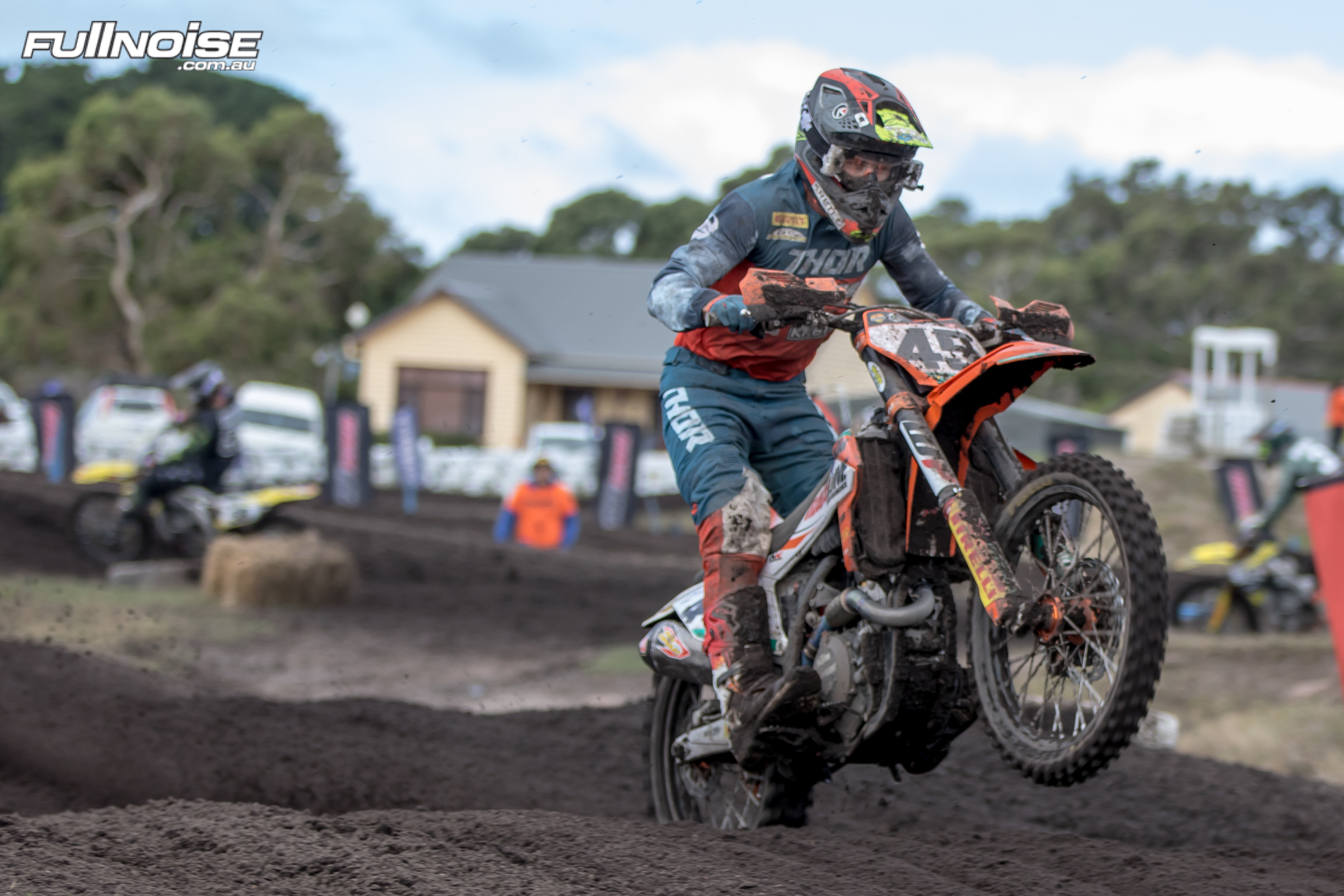 Hayden Mellross will have to fight hard to retain his red plate at Murray Bridge with Clout, Gibbs and Waters alll within ten points of the championship lead.
The 2019 Pirelli MX Nationals heads south this weekend to Murray Bridge in South Australia for this season's first big doubleheader round which will also include the opening two rounds of the Australian Women's Championship.

With three rounds of racing in the books, it is THOR Raceline Pirelli KTM's Hayden Mellross who leads the way in the premier THOR MX1 championship, holding a slender five-point lead ahead of Monster Energy Yamaha's Luke Clout and Clout's team-mate and South Australia's own Kirk Gibbs who sits two points further back in third.

"I feel good coming into this weekend; everything has gone to plan since Broadford. I'm ready to do everything in order to win "Mellross said in a team statement released earlier this week.

DPH Motorsports Husqvarna racer Todd Waters, despite suffering a moto DNF at round two at Wonthaggi comes into this weekend fourth in the championship standings after a near-dominant performance at round three held at Broadford in Victoria.

After winning Superpole and two of the three moto's for the day, Waters has put the frustration of still finishing second at the previous round and will be taking aim at the top step in a bid to close down the nine-point deficit he has to Mellross.

"Murray Bridge is a great track, and I've won there in the past, so I'm pretty confident I can keep the momentum going through all five races this weekend." Waters commented. "I'm sitting in fourth right now, 9 points behind the lead and really having fun at the races.

"DPH Husqvarna has a real family atmosphere, and I've got my Dad helping out as race-mechanic again, so we have this great balance between the seriousness of racing MX1 and getting the job done, and then being able to relax and be completely comfortable between races." 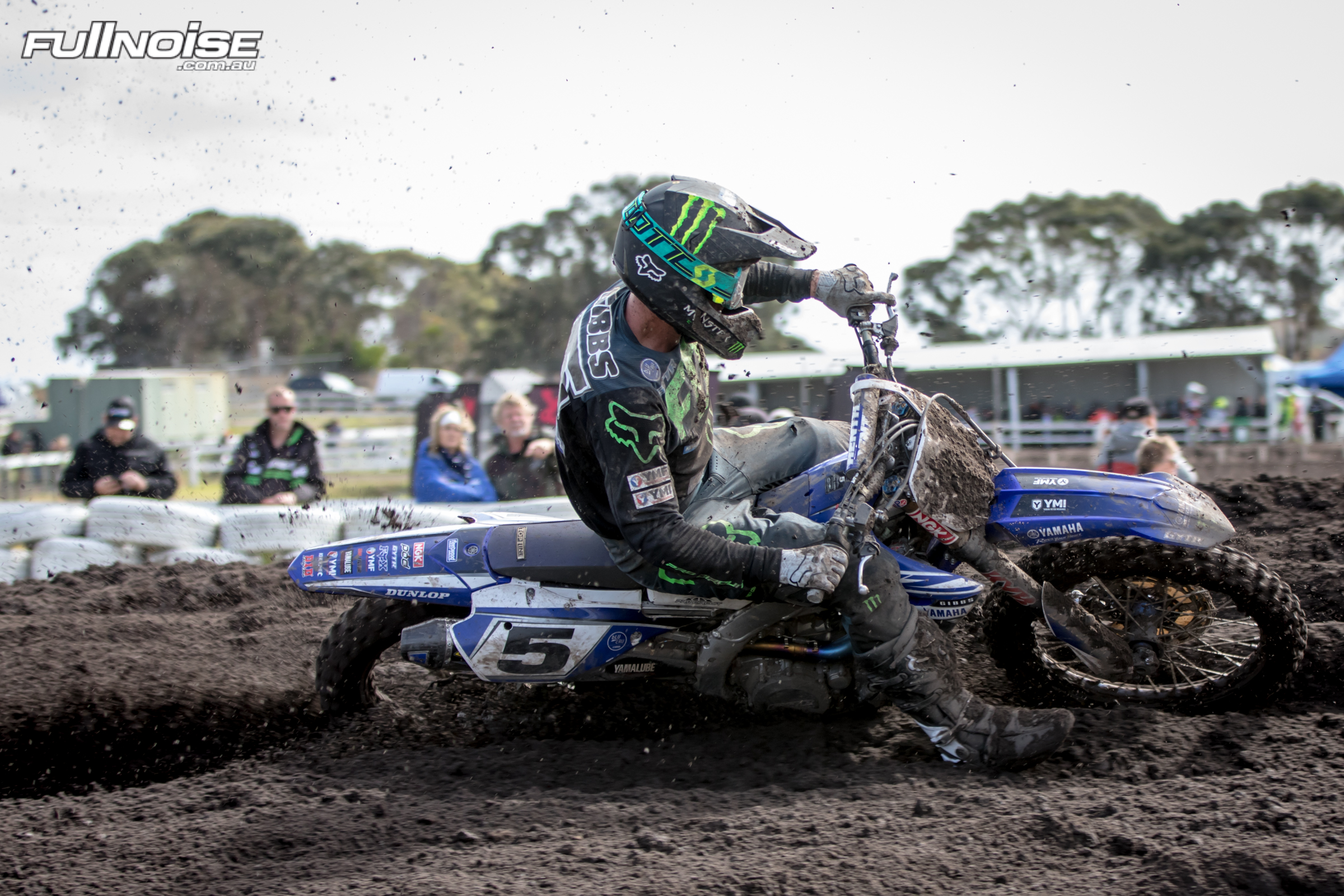 South Aussie Kirk Gibbs will have the crowd on his side both days at Murray Bridge.
Adding to the excitement this weekend will be the return to the series of the reigning three times MX1 champion Dean Ferris who will line up aboard a KTM 450SXF with the backing of Raceline motorsport in a personal deal that will see him contest both rounds this weekend.

OZmoto's Marty Dowd caught up with Ferris for a chat about his return to the Australian race scene mid-season, check out the full interview below.

If you are looking for some additional listening ahead of tomorrow's on track action or on the drive to the track tomorrow morning check out the latest OzMoto podcast where Aiden Williams and Marty breakdown Rd 3 from Broadford, along with interviews with Kirk Gibb about his victory at Round three, Dylan Long checks in to talk about his return to the MX Nationals at Murray Bridge, while Kyle Webster and Aaron Tanti reflect on their MX2 season so far along Rhys Budd from MXD

For the local's all attention will be on local Brett Metcalfe who hails from Mannum which is situated down the road from Murray Bridge. The Penrite Honda racing pilot suffered through a finger injury at round three and after only having surgery 17 days ago will line up for his home race.

"We needed to get surgery, there were floating fragments, and it had broken in several places. I am confident the surgery has stabilised the finger, but I still have a ways to go before its 100%." Metcalfe said.

"There is a lot of racing left, and every point counts towards a Championship. The team and I have spoken, and we will try and race this weekend. Our goals are to earn as many points as we can and race for wins in the second half of the Championship,"

"This situation is not ideal, but we will keep pushing, we turned things around last year coming away with 2nd in the Supercross, so we hope to do the same here." 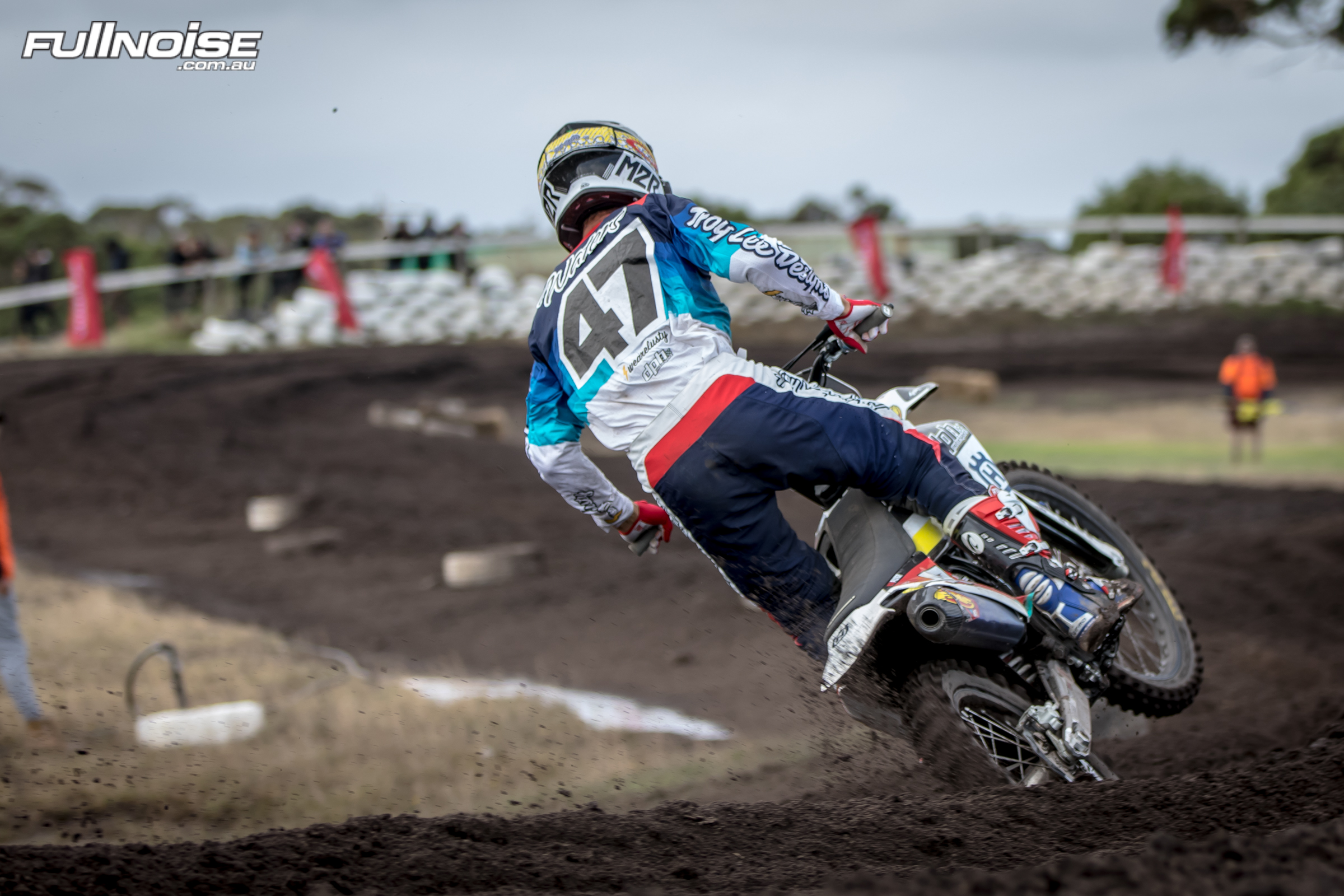 Todd Waters with a DNF combined with the most wins in the MX1 class sits just nine points from the championship lead heading into round four
Husqvarna mounted privateer Jesse Dobson has been in fine form at the opening three rounds of the year, with the Queenslander holding down 5th in the championship standings.

A big fan of the Murray Bridge circuit, Dobson is looking forward to continuing his upward momentum when the gates drop on Saturday.

"I'm really looking forward to racing this weekend." Dobson enthused. "I'm comfortable riding on sandy race tracks and Murray Bridge is one of the best in Australia.

"With five races, I'm going to have to be careful how I manage my fitness and the bike to ensure we both are in prime condition for each race, but I'm confident that I can have another really strong weekend.

"The FC450 is FAST, and thanks to the Rowe family for taking my bike and FIST Handwear for getting me some flights, I'm able to head into the weekend fresh, and concentrate on the two rounds worth of points up for grabs. I can't wait to get to South Australia and go racing."

American KSF racer Justin Rodbell along with Jayden Rykers will be once again aiming to have their Suzuki RMZ450's at the pointy end of the field and will be two riders to watch out for on both Saturday and Sunday along with Charlie Creech who has been a revelation early in 2019. 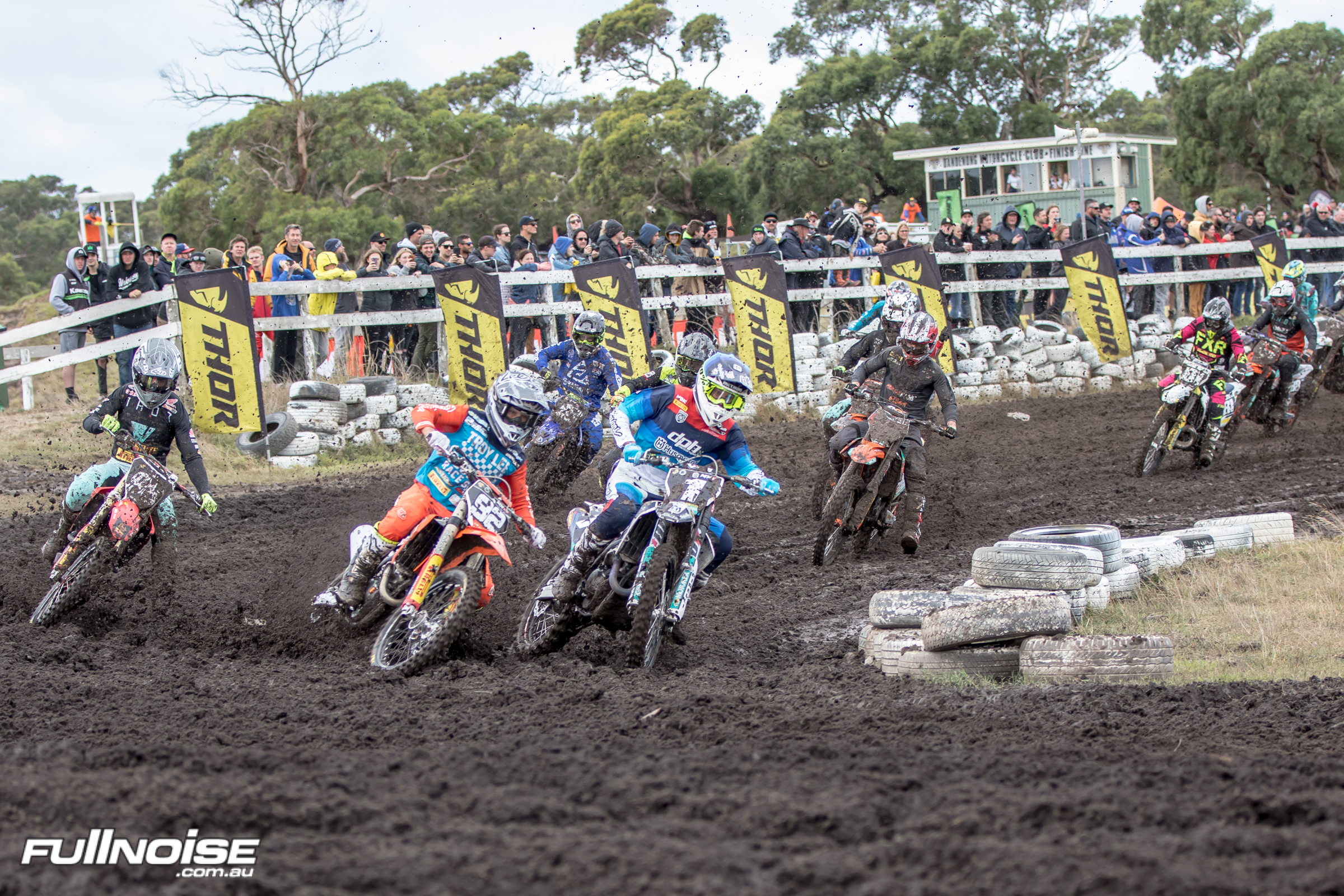 The chase for Wilson Todd will be on in earnst this weekend with the current champ on a four race win streak
In the MX2 ranks, the entire field will be looking for a way to reign in DPH Motorsports Wilson Todd who has been near untouchable in the past four motos.

After opening the season with a third-place moto finish in the mud pit at Appin, The 2018 champion has since gone undefeated and holds a handy 28 point lead over Yamahalube Yamaha's Jay Wilson.

"We get five races this weekend, three on Saturday and two on Sunday, so fitness and conditioning will be a factor this weekend for sure, but I'm confident I'll be able to be at the front each time the gate drops. I've been working hard, and I want to put the FC250 on top again this weekend." Todd commented.

Serco Yamaha's Aaron Tanti and team-mate Nathan Crawford both had good rides last time out at Broadford along with Penrite Honda CRF racing's Kyle Webster, with the trio all needing to finish ahead of Todd to keep their Championship hopes alive.

Joining the MX1 and MX2 classes on track this weekend will once again be the MXD class that is currently headed by Regan Duffy, with Honda's Rhys Budd five points down in second position.

Australia's fastest female racers will have their first opportunity to show off their riding talents in 2019 as they contest four races across the weekend.

With the likes of Meghan Rutledge and Maddy Brown lining up, the pace up front will be fast and furious.

If you can't make it to the track this weekend, make sure to catch all the action on NRGTV by CLICKING HERE