MX Nationals Riders Ready To Fire Back Into Action This Sunday 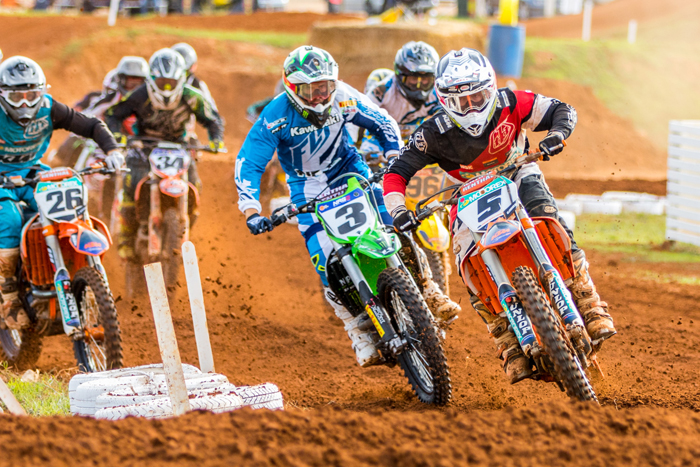 The nations best motocross riders are set to fire back into action this Sunday the 5th of July when the sixth round of the 2015 MX Nationals heads to Raymond Terrace in New South Wales.

KTM Racing's Kirk Gibbs will lead the way when racing gets underway, with racing once again being streamed live via NRGTV.com.au and as with every round this year, Fullnoise.com.au will embed the stream right here on the site to make it as easy as possible to find.

Excitement is high for the KTM Motocross Racing Team as it approaches this weekend's continuation of the Monster Energy MX Nationals series at Raymond Terrace, New South Wales, holding the top two positions in the MX1 championship.

With five rounds down and five yet to go, two enthralling contests are underway for KTM‰Ûªs premier class riders, Kirk Gibbs and Luke Styke.

Championship leader Gibbs stretched his lead out to a formidable 52 points when the series reached its halfway point at Coolum on Queensland's Sunshine Coast at the end of May.

The Queensland-based South Australian is looking more polished and more like champion material than ever before, however Gibbs is the first to remind anyone counting chickens that motocross is a risky game and anything can and often does happen.

‰ÛÏOnce we got back from Manji I got back into my routine." Gibbs said. "I had a big couple of weeks of work, won a local state race here, and then just kept on training hard.

"Finally I‰Ûªve just completed a week off the bike, and I think I needed that to really get excited about going into the second half of the season.

"It worked. I've been itching to get back on the bike and I'm going to head out tomorrow for the first ride. I'm really looking forward to it.

"The last couple of years at Raymond Terrace I have struggled, but this year I feel like I'm ready to turn that around.‰Û 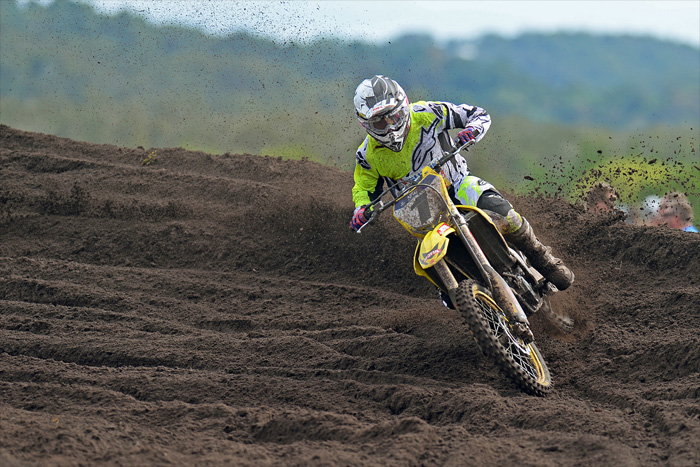 Matt Moss will be aiming to be back on the top step of the podium at Raymond Terrace on Sunday - Credit: Jeff Crow
Team Motul Suzuki riders Matt Moss and Kale Makeham are ready to launch into the second half of the 2015 MX Nationals when the series gets back underway this weekend.

Raymond Terrace will play host to the sixth round of the championship this Sunday the 5th of July with Matt Moss ready to put a difficult first half of the year behind him and put his best foot forward on a track that has provided him with some great success in the past.

The two time reigning MX1 champion picked up the round win at the venue last year aboard his Suzuki RM-Z450 and will be aiming to the same again on Sunday after spending the five week mid season break putting in some solid testing and training. 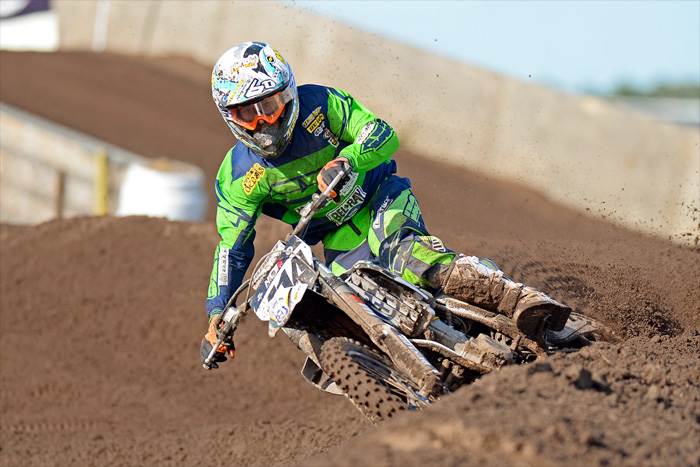 Jesse Dobson will lead Husqvarna into battle this weekend - Credit: Jeff Crow
They haven‰Ûªt all had textbook winter breaks, but as Australia's most important motocross series, the Monster Energy MX Nationals resumes this weekend, the young men of Husqvarna‰Ûªs Factory Support squad all have one thing in common ‰ÛÒ they are coming ‰Û_ready or not.

Raymond Terrace north of Newcastle is the location for this weekend's round six of the ten-round national championship series, and the squad‰Ûªs two MX1 category contenders, Husqvarna FC 450 rider Jesse Dobson and Husqvarna FC 350 pilot Aaron Tanti are performing well in the premier class.

Last time out, 18-year-old Dobson moved a step closer to his season goal of a top five championship finish when he elevated himself to sixth in the premier category, while Craig Anderson Racing‰Ûªs Tanti is determined to establish himself as a regular top-10 performer.

‰ÛÏEveryone says their mid-season break has been awesome and gone to plan - mine really hasn't for various reasons, but if everything goes to plan there‰Ûªs no reason why I can't be inside the top five." Dobson said.

"If I'm not on the ground I'm inside the top five and the speed is there every time, so the pieces are all laying there. If I can put them together on the day there‰Ûªs no reason why I can't podium. We were close at Coolum."

‰ÛÏThe winter break has been pretty crazy ‰ÛÒ riding, training, working." Tanti explained. "I've pretty much ridden every single chance I've gotten through the break to try to improve on the little things I needed to improve on.

"This round is a local round for me, and I like Raymond Terrace too. The goal for me this weekend is to get into the top 10, and then to stay there throughout the last few rounds of the season.‰Û 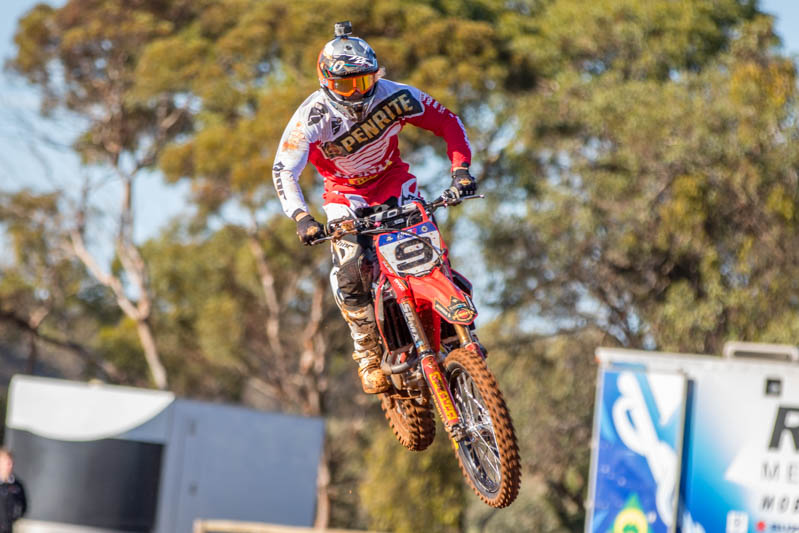 Cody Cooper and Ford Dale will hit the track for Penrite Honda
Leaving no stone unturned in their preparation for Round 6 of the MX Nationals at Raymond Terrace this weekend, the Penrite Honda Racing team embarked on a comprehensive testing program throughout the five-week hiatus.

After celebrating a podium finish with Ben Townley at the fifth round of the series at Coolum, the team immediately commenced an intensive testing program that included rider training in Australia, New Zealand and the USA.

While the team worked with Cody Cooper in Australia and New Zealand, teammate Ford Dale jetted to America to train at the famous Carmichael ranch.

"I definitely feel a lot stronger going into Round 6," Cooper said. "The day following the final round we did some testing on the Coolum track and made some valuable changes,

"From there I went home and did some more testing and changed my training. I have done some local races and riding and racing with Ben (Townley) has helped me greatly."

Despite qualifying first at the opening round of the series Ford Dale has since struggled with his consistency.

The 2012 Australian MX2 Champion said stepping straight into the training programs of Jeremy and Alex Martin as well as Joey Savatgy proved difficult but not impossible.

"I got there and went straight into 40minute motos and sectionalised training," Dale explained.

"Their routine is relentless and I have learned so much. Turning it all around in five weeks isn't easy and I am hoping for improved results with what I have learned and practiced, but I am also realistic.

"We have short, mid and long term plans and objectives. We will just have to see where we are at on Sunday night," Dale added.

The Penrite Honda Racing team has invested a lot in a bid to turn their results around and Team Principal Yarrive Konsky said he was happy with their progress.

"Investing in Ben competing is beneficial for many reasons. He is great for our partners but also for our technicans and riders,

"He brings a wealth of knowledge and we learned a great deal following Round 5. Ford was sent to Carmicheals and testing hasn't stopped with Cody.

"The team has worked relentlessly following Round 5 and we are all looking forward to the second half of the MX Nationals". 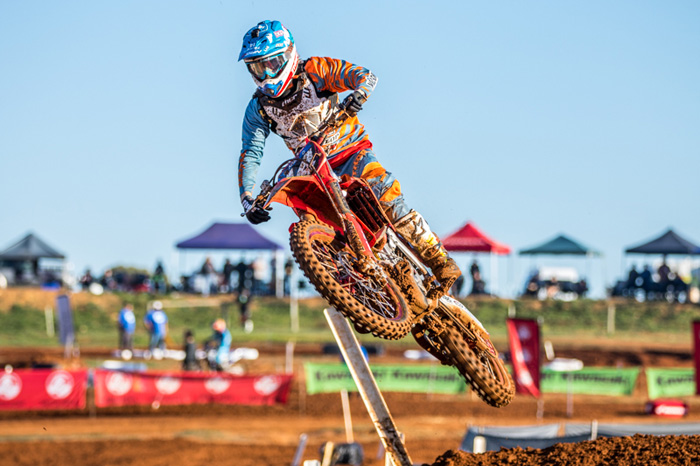 Luke Wilson and Geran Stapleton are both looking forward to getting back into the race season - Credit: Aaryn Minerds
Wilson MX Penrite Honda will return to racing this weekend after a productive mid-season break, when the team heads to Raymond Terrace for round six of the MX Nationals.

Despite MX2 Honda teammates Geran Stapleton and Luke Wilson spending the five week break on opposite sides of the world, both will enter round six this weekend feeling refreshed, and more prepared than ever before.

For Stapleton the mid-season break was dedicated to furthering his on-the-bike training in America, and has returned to Australia looking to leave a lasting impression on the MX2 class over final five rounds of the MX Nationals.

‰ÛÏAmerica was seriously the best thing I could have done for myself in terms of filling in the mid-season break,‰Û