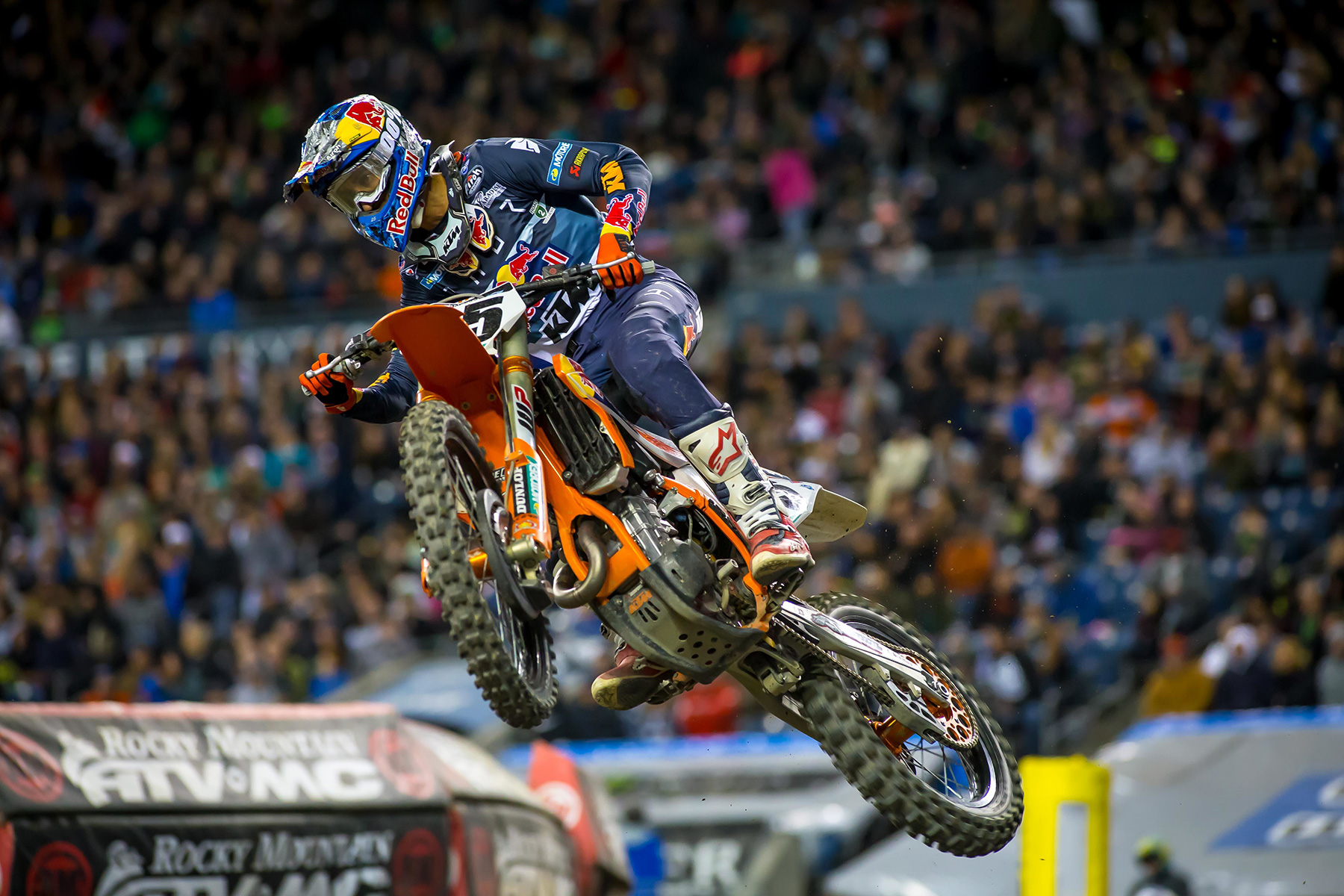 Marvin Musquin took his second 450SX class win in a row. Photo: Rich Shepard
Marvin Musquin has taken his second win of the Monster Energy Supercross season at CenturyLink Field in Seattle but was docked championship points after an early race infraction.

Ken Roczen looked like a new rider in the opening heat. The HRC Honda rider passed both Blake Baggett and Marvin Musquin to take the first 450SX class win of the night. Musquin made his way past Baggett but didn't have enough in the tank to stop Roczen from taking the win. Baggett dropped a few more spots when Cole Seely and Zach Osborne worked their way past, Osborne ultimately past Seeley to grab the final podium spot.

In the main event Zach Osborne was credited with the holeshot but previous weeks winner Marvin Musquin soon demoted him to second and assumed the lead. All hell broke out behind the leaders when Chad Reed got loose on a jump in the first rhythm section and was landed on by Kyle Chisholm. The crash took both Reed and an innocent Justin Brayton out. 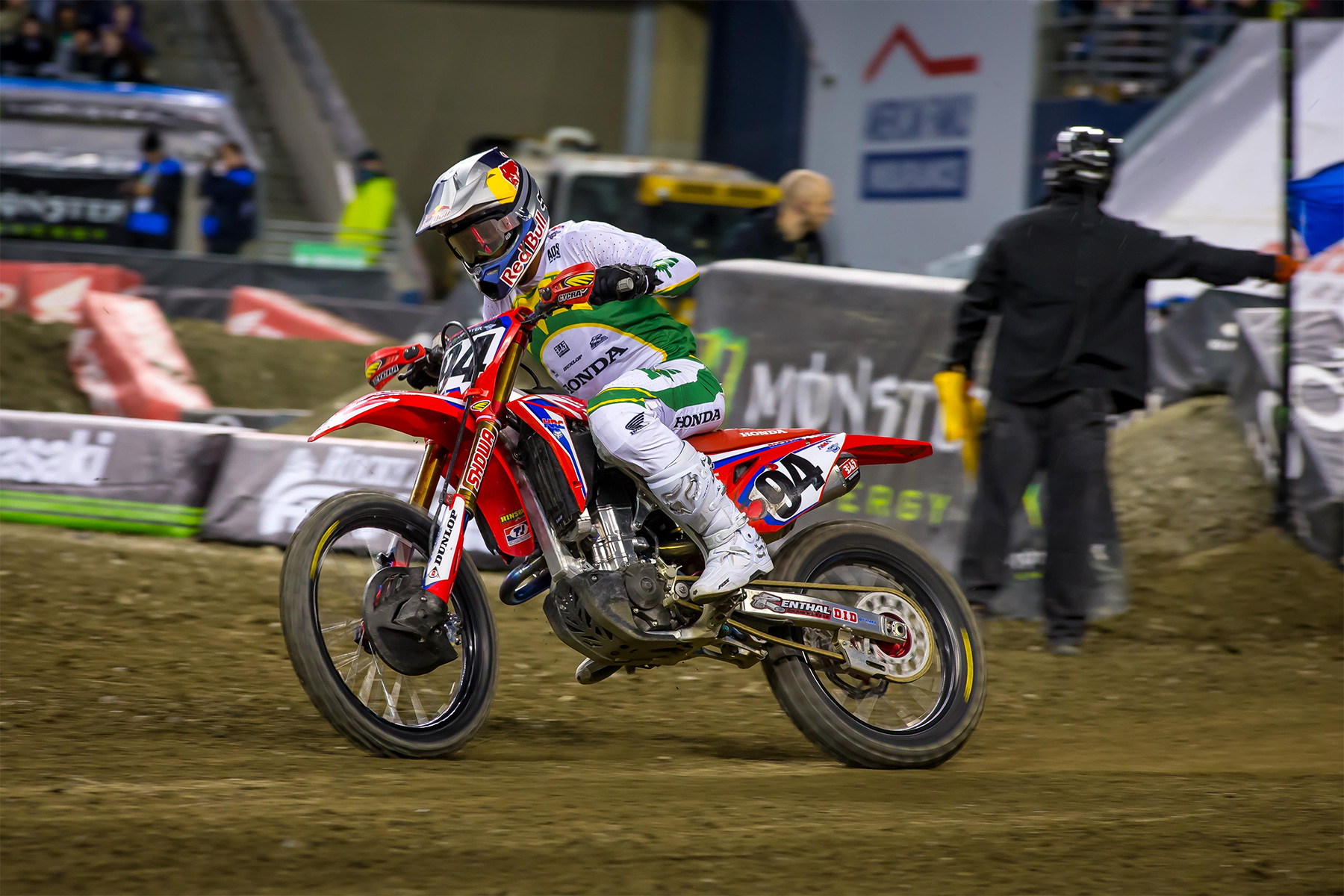 HRC Honda's Ken Roczen bounced back from recent poor form to finish a strong second place.
Musquin set about stretching his lead while Ken Roczen rode in second, unable to mount a challenge on the Frenchman. Cole Seely, Eli Tomac, Joey Savatgy and Cooper Webb provided the on-track action as the four battled for the final podium positions.

After Musquin crossed the line officials didn't declare the results as the Frenchman had deemed to have jumped a double under a medical flag, during the Chad Reed crash. After long deliberation, Musquin got to keep the win but has been penalised 7 points.

‰ÛÏI really enjoyed the track and the riding, I was super happy about everything today," Musquin said. "Unfortunately, I made a mistake in not seeing the red cross flag. I saw a lot of yellows and I slowed down to make sure I was safe but I did jump, and the rules are ‰Û÷no jumping.‰Ûª It‰Ûªs a big bummer, hard to swallow, but it doesn‰Ûªt take anything away from a big win today.‰Û 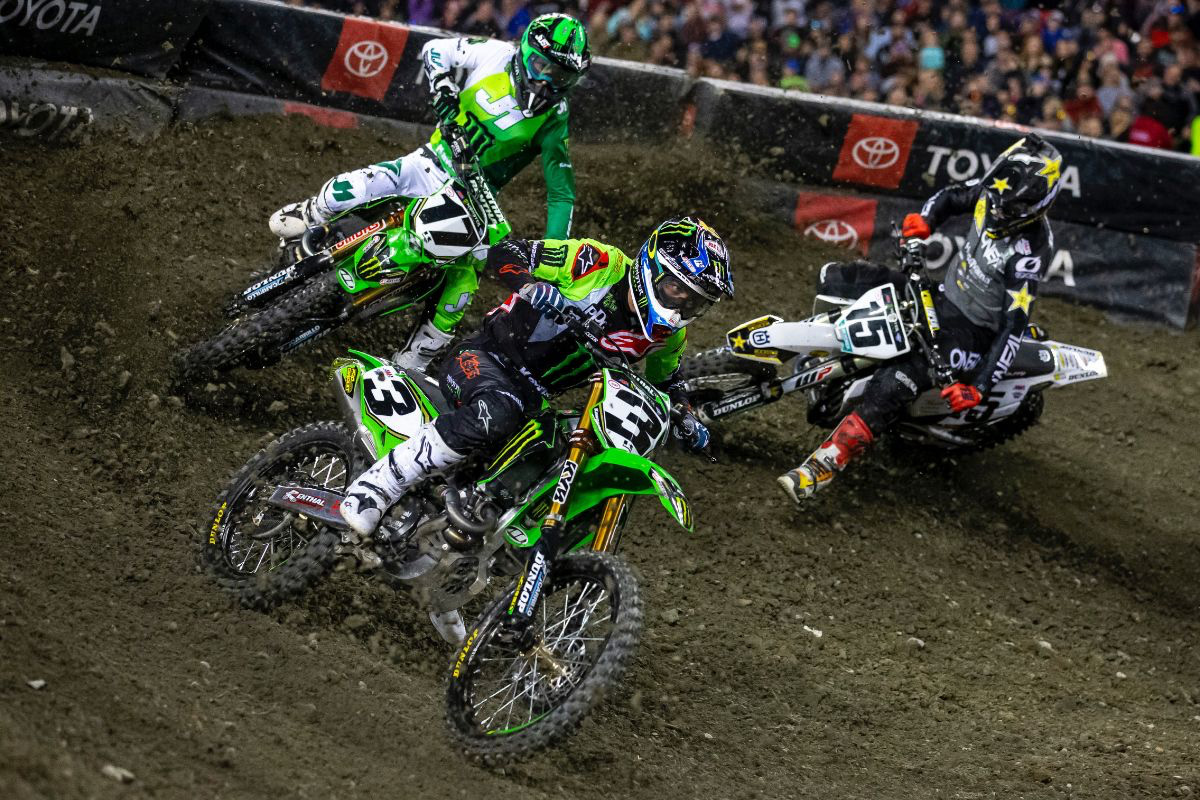 Following the penalty to Musquin, Tomac was able to make up ground on both of the competitors he trails in the points standings.
Third place Eli Tomac keeps Eli Tomac in the championship hunt and is now focused on gaining ground in Houston.

‰ÛÏI would have loved to be able to take the win tonight, but landing on the podium is always a good place to be," Tomac said. "The entire Monster Energy Kawasaki team and I have been working each week to improve on the bike and myself. Tonight‰Ûªs track had a great layout and I was just feeling good all day; there were a lot of fun battles from the heat to the main. We‰Ûªll build from what we‰Ûªve learned here and apply it to Houston next weekend.‰Û 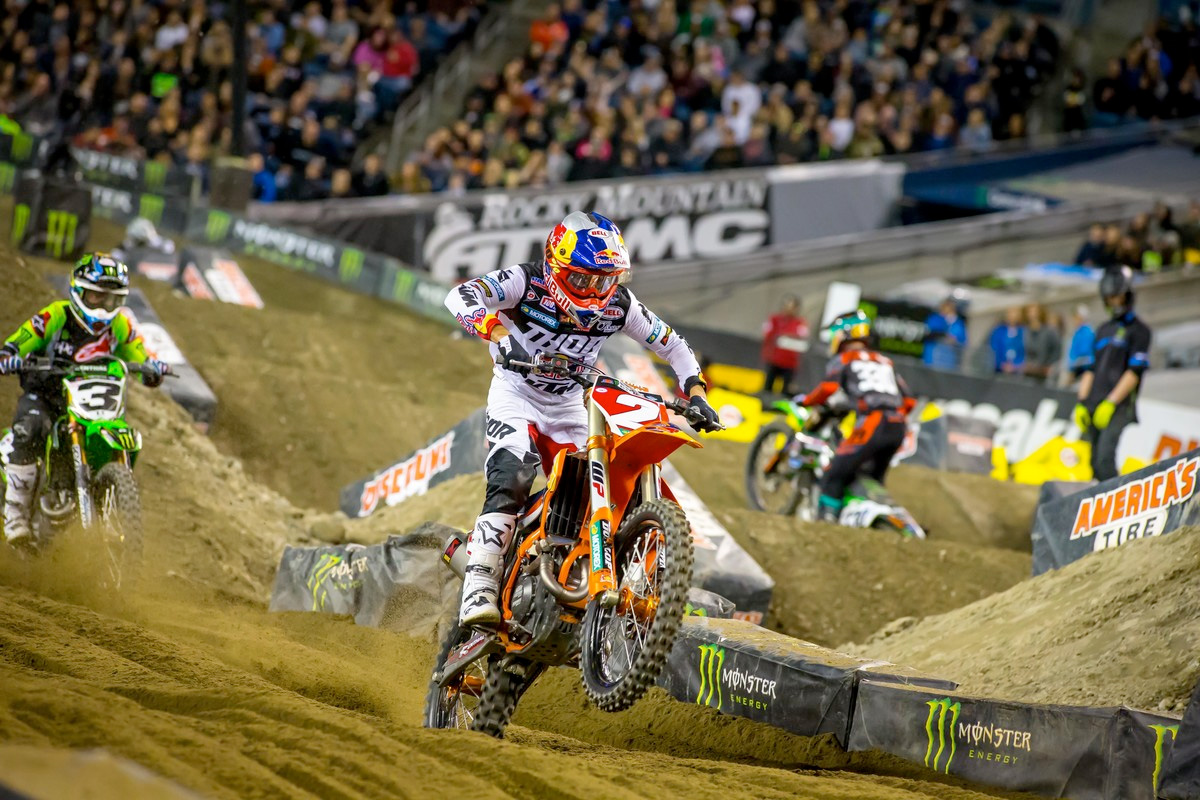 For Webb it wasn't his best round but fourth was still a solid result.

‰ÛÏIt was an up-and-down result today. It was a good charge back in the Main Event but I definitely wanted to be on the podium, so we‰Ûªll work hard this week and try to be back up there in Houston.‰Û 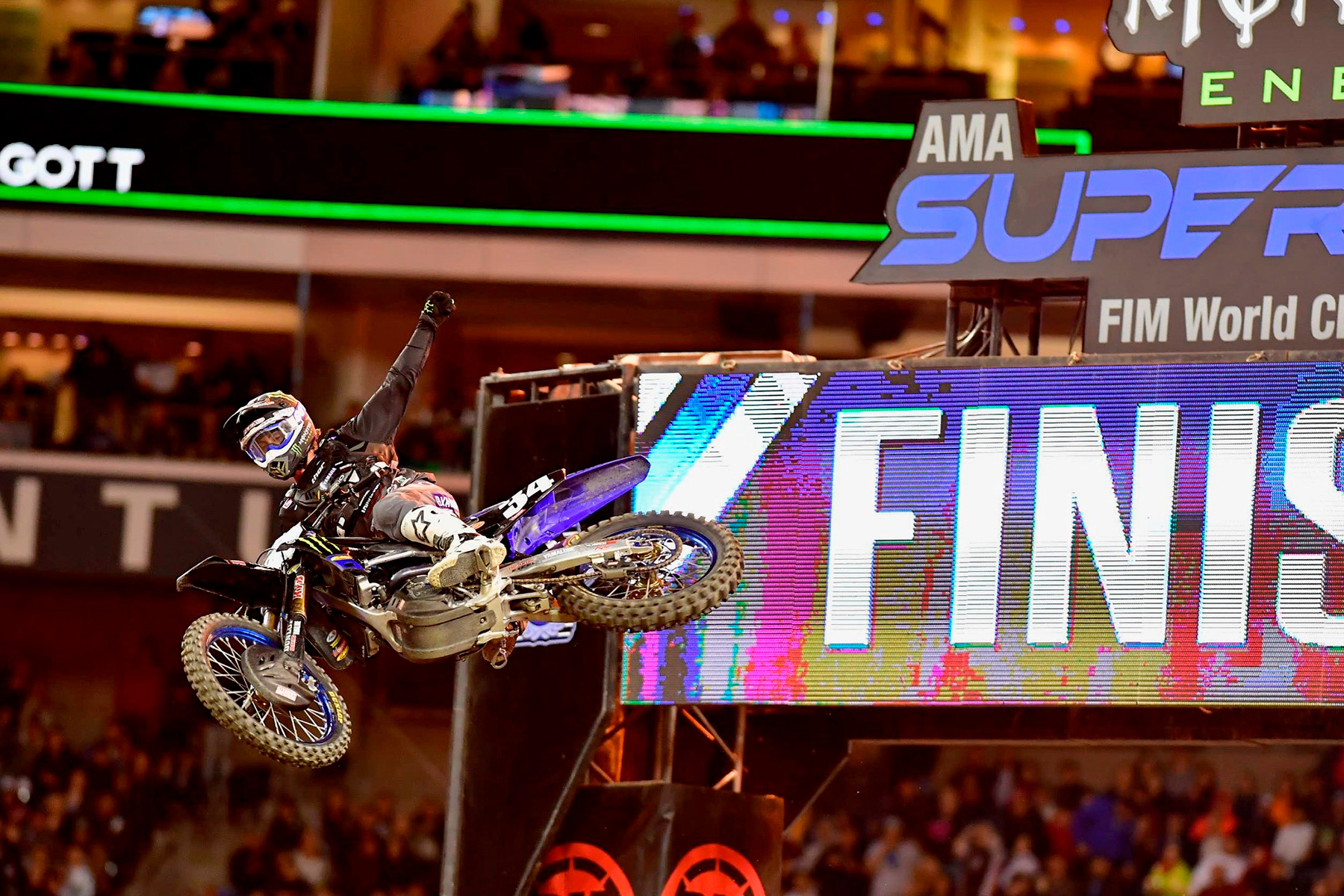 Earlier in the day, Ferrandis got off to a great start and was the fastest qualifier. The Frenchman then came out swinging when it came time to race, taking his second heat win of the season. His teammate Colt Nichols crossed the line second to make it a Monster Energy Star Yamaha Racing 1-2 finish.


Heat two saw championship leader Adam Cianciarulo grab the holeshot and take a wire to wire win. Jimmy Decotis rode a solid race through the field to claim second while Cameron McAdoo rounded out the podium with third.

In the main event, Nichols came out of the gate in second, just ahead of Ferrandis. He then moved into the lead, but unfortunately, the Oklahoma native mistimed a rhythm section, went down hard, and was unable to rejoin the race, though importantly able to get up and walk away. Shortly after Nichols crashed, Ferrandis took the lead in the race and held it all the way to the checkered flag in spite of a late charge from the series points leader Adam Cianciarulo, delivering a great result for the team and Yamaha. Jimmy Decotis continued his excellent form rounding out the podium in third., 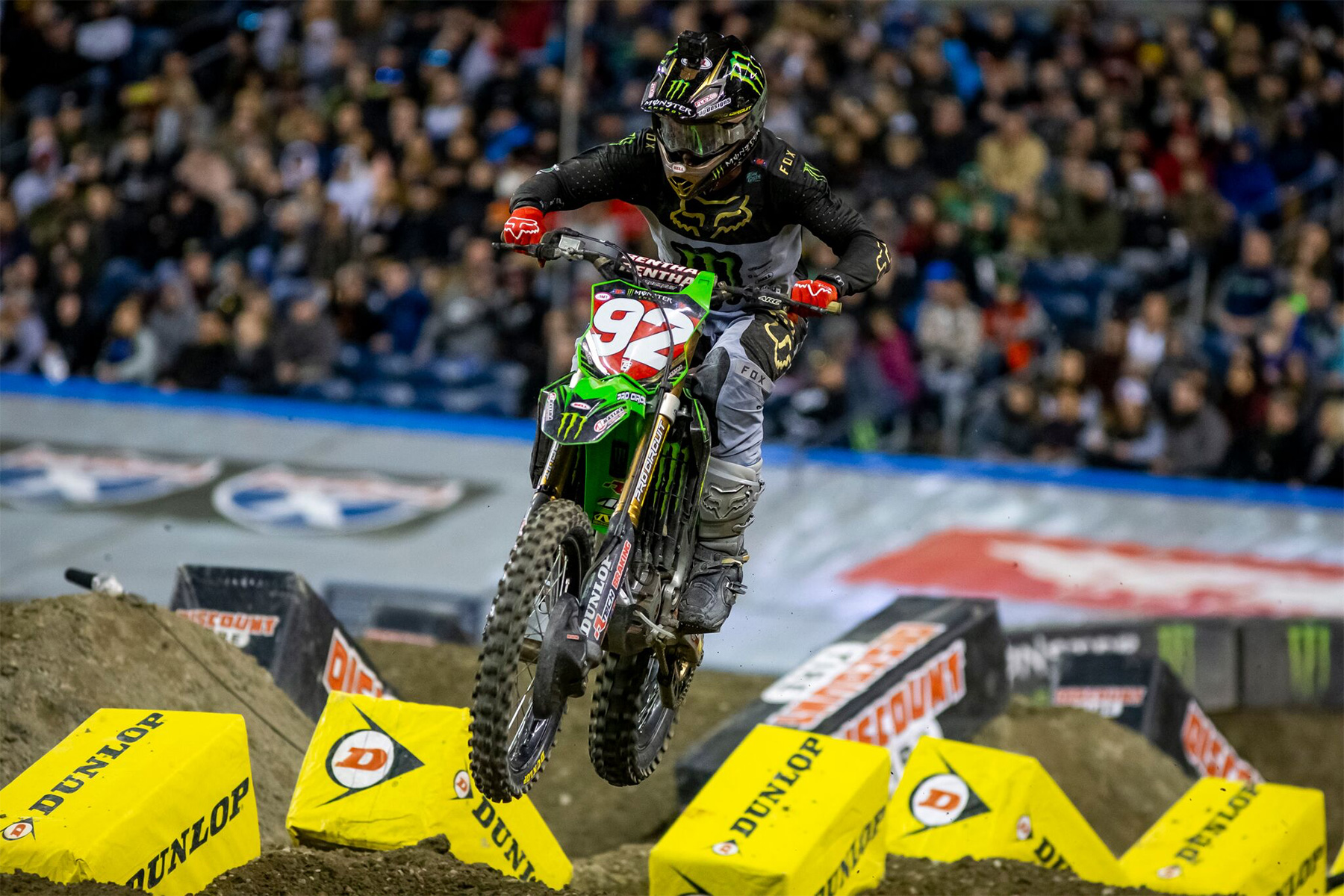 Championship leader Adam Cianciarulo put on a strong charge in the closing laps to try and steal the win but had to settle for second place.
‰ÛÏFor sure the emotion is at its maximum tonight! It was a big moment for everybody to finally get this first 250SX win. We were waiting for it for so long and finally made it happen. The feeling is really awesome," Ferrandis said.

‰ÛÏThe bike was really good tonight. We made some changes on it between practices to get the best bike as possible for the track condition. The track wasn‰Ûªt that difficult this weekend at Seattle even though some rhythms were a bit tougher than other ones. The most difficult part about this race was myself. I‰Ûªm not used enough to leading a race so I did not want to make mistake and was not riding at 100% because of that. But I am very happy to take this win tonight. It gives me more confidence for the next upcoming races now that I know I‰Ûªm able to win a Supercross race in the U.S.!

Ferrandis‰Ûª win helped his cause in the title chase, closing the gap to 12-points behind the 250SX West championship leader with three rounds left. 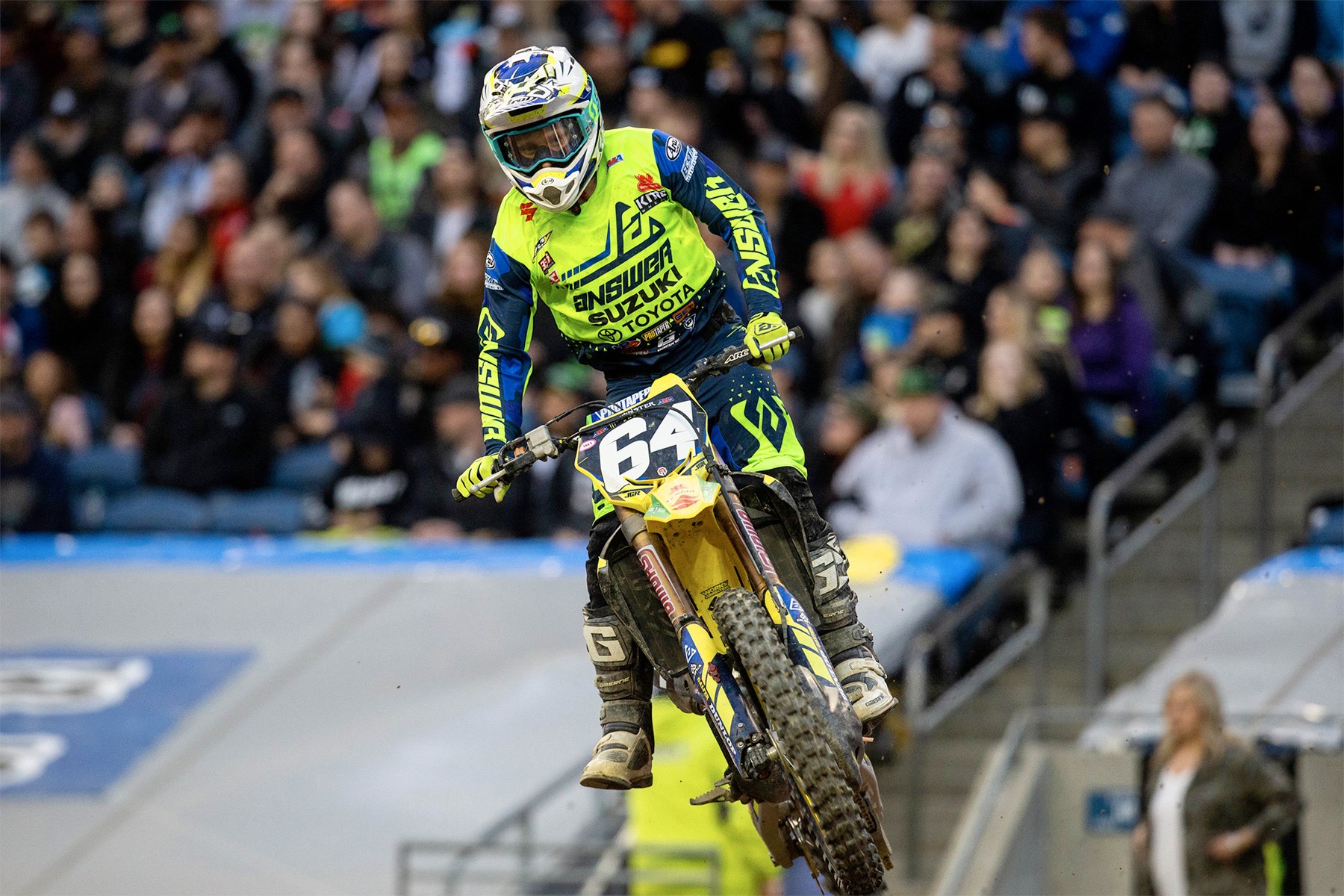 Decotis started inside the top-five and pushed his way into the lead for two laps. He held that pace for several laps before settling into third, which logged his second third-place finish of the series.
For Cianciarulo it was still a solid ride despite coming up just short of the win and with a handy points gap is still firmly in the drivers seat championship wise.

‰ÛÏI had a couple sections I was faster and maybe others that were slower,‰Û 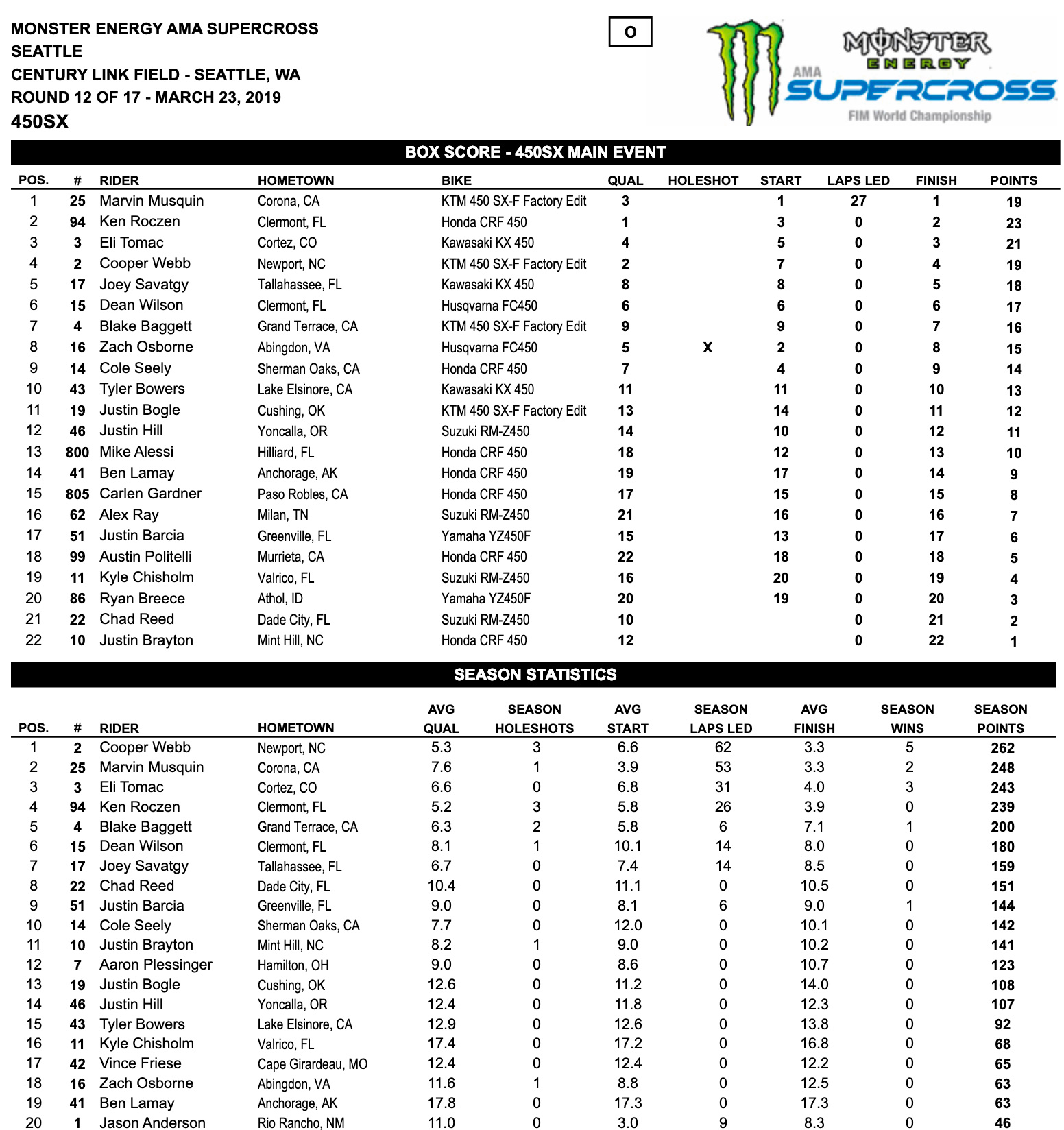 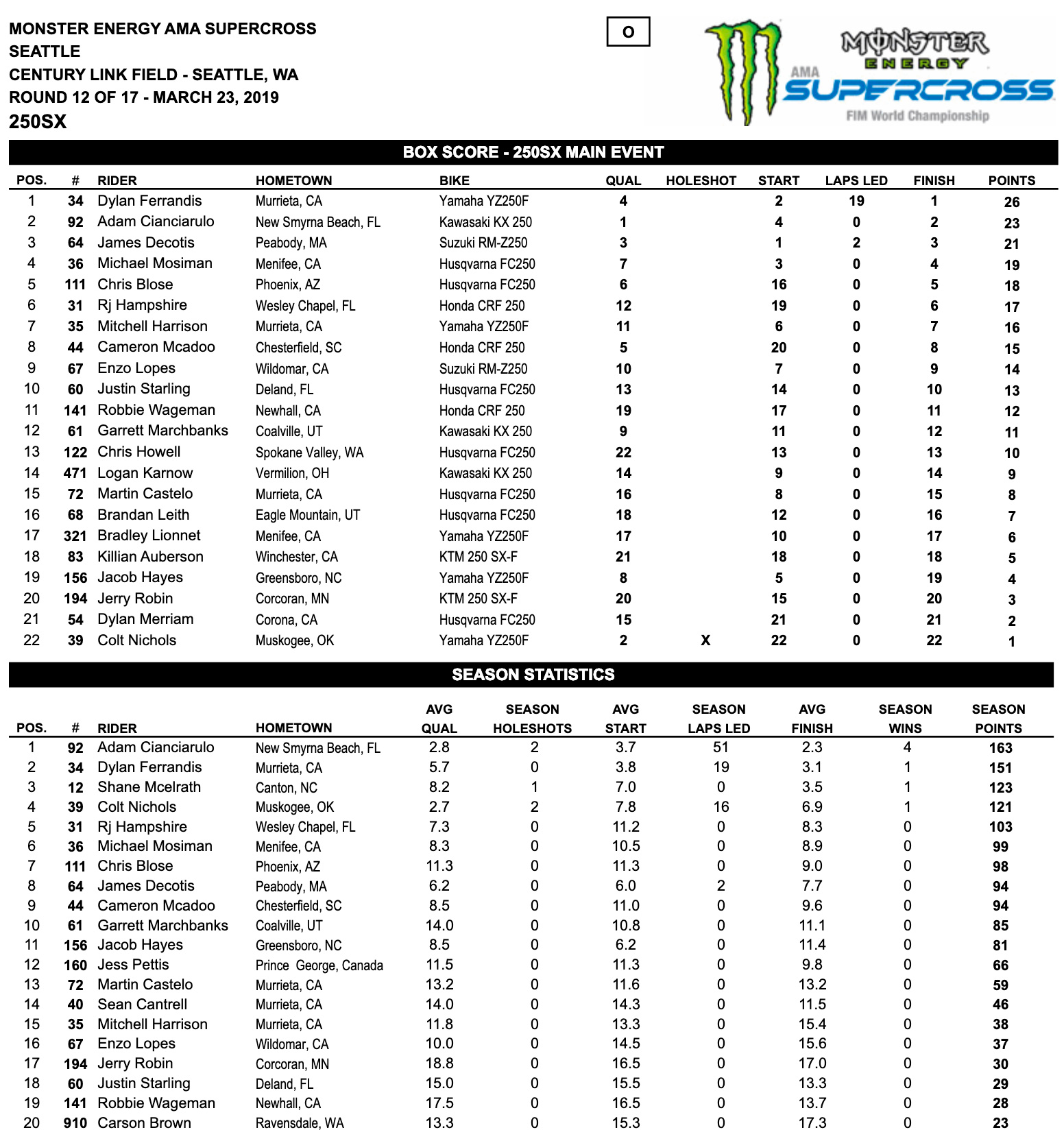