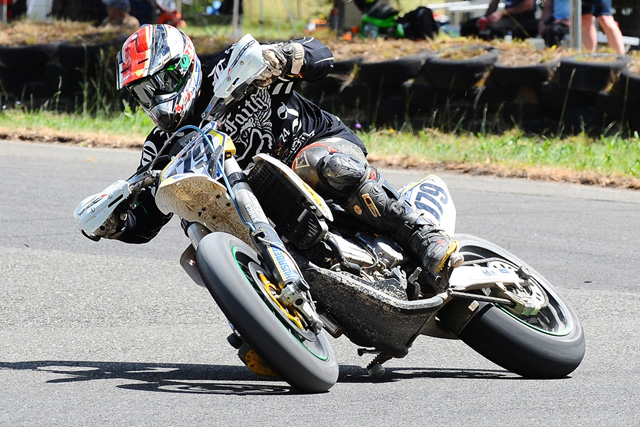 Round 1 of the Motoworks MVD Racewear Queensland Supermoto Championships have been run and won with familiar faces taking home the spoils.

The Stanthorpe sand was treacherous early on in the weekend making the track a little slower than previous years. Competitors put on some excellent racing over the weekend in front of a large crowd.

Ross Taylor proved once again he is the boss of the big bore class dominating qualifying and winning all of the eight races in the S1 over 450cc class.

Taylor put the field on notice qualifying 4 seconds quicker than Dave Oliver in position 2. The next 4 riders were much closer being separated by less than 2 seconds with Ward Freeland and John Newton filling the front row.

Taylor's Rising Sun Honda CRF was unstoppable even when forced to start from pit lane behind the entire field. Taylor was calm and composed out front leaving the rest of the field in his roost. Consistency was the key for the remaining riders with Newton on the 550 Aprilia taking second overall. Third place went to Freeland on the Husqvarna by one point over Oliver on his Aprila 550.

Oliver showed impressive speed during the weekend but a crash in race one hurt his overall chances. Pete Smith showed some impressive speed on day two to muscle the big Husaberg into contention. Tom Gardiner, Paul Dawson and Josh Symons kept themselves in the title chase by finishing every race.

In the S2 450 division is was Beau Laing on his new Motorworks TM450 was the man to beat setting a blistering pace out qualifying Luke Burgess on the Mackay Kawasaki KX450 by over half a second. Jarrod Koppe and Aaron Waton weren't far behind rounding out the front row. The next six grid positions were separated by less then 2 seconds with veteran Pete Cox rounding out the top ten.

Koppe on the Future Sport Suzuki 450 drew first blood taking race one after Laing made a rare mistake, stalling in the dirt. From there Laing and Koppe battled closely in each race with Koppe getting great starts with Laing, Burgess and Watson chasing hard. Laing took 4 wins and Koppe 3 with a DNF in race 7 forcing him to settle for second overall.

Cox was consistent across the weekend taking third overall podium. Crashes and DNF's hurt key competitors Darren Webb, Luke Burgess and Russel Lemon's overall chances. Laing will go into round 2 with a slim lead over Koppe with more exciting racing expected as they head north.

Laing dominated the first six races before a mechanical DNF left him to race round 8 on a borrowed bike. Warren Gill on the Future Sports Suzuki 250 capitalised winning the last 2 races and taking the overall ahead of McLiesh with Laing third overall. Dickson was the big improver of the weekend doing his best to represent road racers while Barr and Crossley stayed in touch to keep their championship hopes alive. Laing will have his work cut out for him if he wants to regain the 250cc title as Gill and McLiesh gained lot of confidence from round one.

Kawasaki Veteran rider Kim Gross only needed one session to claim the top spot in qualifying. Gross's impressive time was enough to hold off Darren Webb, Steve Coppock and Dave Oliver who rounded out the front row. The field was close with less then a few seconds separating the remainder of the Veterans field.

Webb got off to a good start winning the first 2 races with Gross and Pete Cox close by. Unfortunately the weekend ended early for Gross allowing Coppock to step and challenge the front two. Webb won five races and Dave Oliver took out the other three. NSW rider Webb took the overall victory with Cox and Coppock taking the final spots on the podium.

Round two will take place at the Whitsundays Motorsport Complex May 18. 19 & 20.