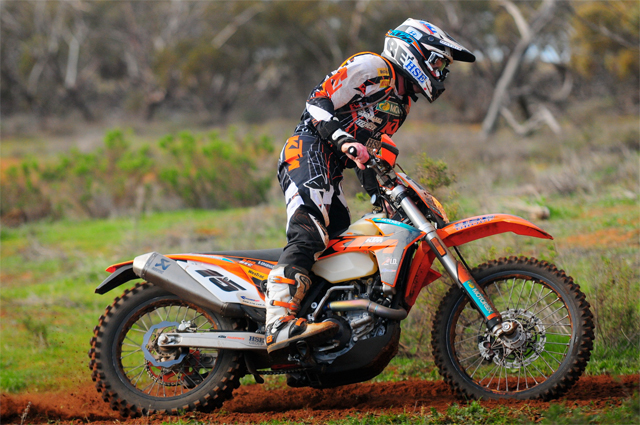 The Motorex KTM Off Road Racing Team is primed and prepared for one of its most important events of the year, the Australian Four-Day Enduro championship (A4DE), which will take place at Harvey, Western Australia from Wednesday until Saturday.

Located just 90 minutes south of Perth, the Harvey Fresh 2013 A4DE will see a field of more than 250 riders including the country‰Ûªs elite enduro racing talent battle for outright honours, as well as national class titles and state team championships.

Motorex KTM Off Road Racing Team riders Chris Hollis and Ben Burrell will be joined under the team awning by HSE KTM Motorex rider Ben Grabham, who has rushed back from Port Hedland, site of yesterday‰Ûªs victory in the WA Desert Tri-Series.

A former A4DE winner, ‰Û÷Grabbo‰Ûª has left the 2014 EXC500 which he rode to debut victory in the far north of the state in wait for next month‰Ûªs series finale, instead filling the saddle of the off road team‰Ûªs EXC500 in the A4DE E3 class.

‰ÛÏI‰Ûªm switching from desert racing mode to enduro mode so I‰Ûªll have to start remembering how to use the first three gears instead of just the top three gears!" Grabham stated. "I‰Ûªll be riding one of the Motorex KTM Off Road Team‰Ûªs 500EXCs so that‰Ûªs great.

"I raced here for the first time in ‰Û÷02 and went reasonably well and loved the area, I like riding in WA full stop so I‰Ûªm happy to be here. I won‰Ûªt know where I fit into the scheme of things until we start as I haven‰Ûªt raced enduro since the four-day last year, but my goal is to be at the pointy end of the field in E3, and if I can do that I‰Ûªll be happy.

"I am Not sure how the body‰Ûªs going to go after the desert race that finished Sunday, I‰Ûªm not too tired from the weekend but I‰Ûªm underdone in that I haven‰Ûªt walked any of the special tests yet and won‰Ûªt have a lot of time to try to walk anything other than the prologue to see what‰Ûªs in store, so I‰Ûªll just have to use my eyes and see what‰Ûªs coming at me," he added. 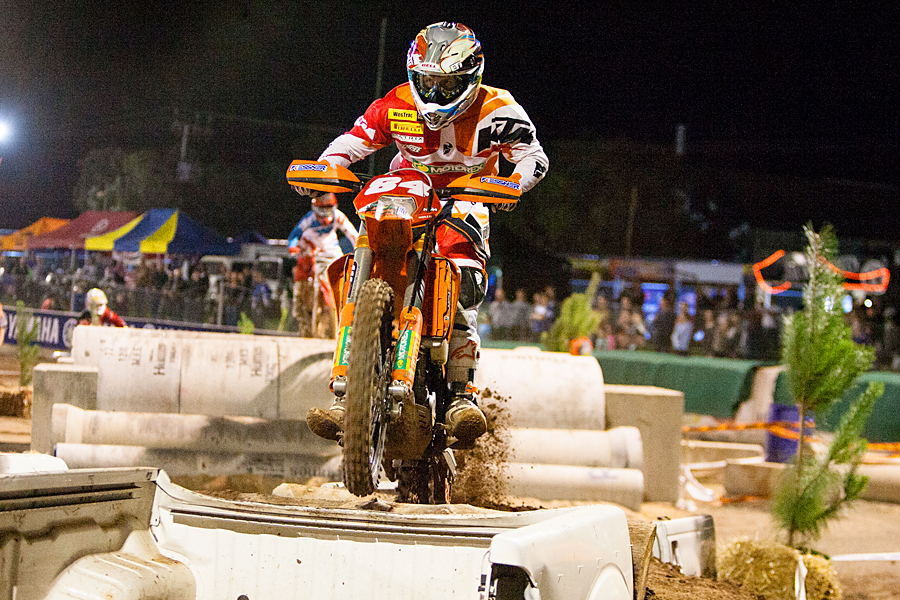 Chris Hollis who has raced in every type of Off-Road event in 2013 will be aiming for both outright and E2 honours at the 2013 A4DE - Credit: Aaryn Minerds (File)
Another A4DE champion, 2008 winner Chris Hollis will challenge for the E2 crown on the KTM450EXC.

‰ÛÏEverything‰Ûªs great, the venue‰Ûªs good, the tests are really cool, just nice and flowy and pretty fast." Hollis explained. "It‰Ûªs quite a picturesque place; everyone‰Ûªs done a really good job and they‰Ûªve marked out the tests well so there won‰Ûªt be any course cutting.

"You get a few days to walk the eight tests, all up we‰Ûªve walked each one twice, so you get to know it really well before you race on it. I like that, it‰Ûªs safer that way and kind of back to grass roots style enduro and I really like it.

"Just having that time with the course to check out terrain and think about bike setup.‰Û 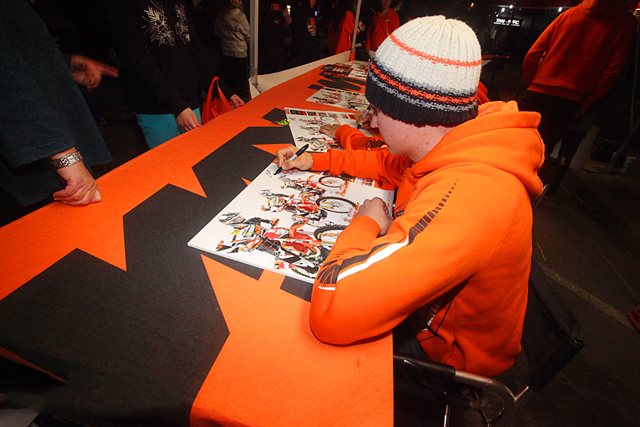 Ben Burrell fresh of the back of his success at Hattah, will look for a good result in the highly competitive E1 class - Credit: Aaryn Minerds
Motorex KTM ORT Manager Brad Williscroft has not big predictions for this years event and will wait until the first test results come in on Wednesday to see where his team riders are at.

‰ÛÏWe‰Ûªve been here since Saturday and walked all eight tests a couple of times each." Williscroft stated. "Grabbo turned up today and he‰Ûªll walk as many as can, and try to see them all at least once before the 2-3 kilometre Prologue which starts tomorrow afternoon after lunch.

"Where we stand is always difficult to say at the 4-day before it starts. There are a lot of fast guys here this week including last year‰Ûªs winner in Daniel Milner and Matt Phillips as well as all the regular AORC guys. "We‰Ûªll be strong contenders across several classes.

Hollis could easily win his class, there are a lot of grassy tracks which Chris is really good on so hopefully he can do some damage there. Grabbo has a good shot in E3 as well.

"Benny has a tougher road in E1 with both Milner and Kearney there, but all the boys are happy with everything. We‰Ûªll just have to wait until Wednesday to see where we sit after the first day," Williscroft concluded.

Sidelined 2011 and 2012 champion Toby Price, who was seriously injured while racing in the United States two months ago, will be a very welcome visitor under the Motorex KTM awning as he visits to support the team.

An event Prologue will take place Tuesday afternoon in order to determine starting positions for the A4DE.