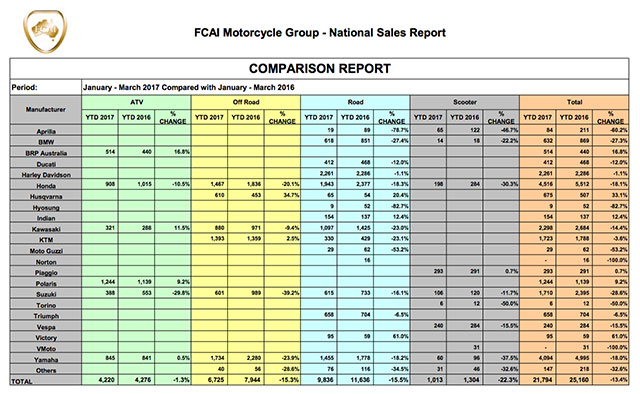 The national motorcycle market suffered a 13.4 per cent decline in the first quarter of 2017 compared with the same period in 2016 according to the latest sales data published by the Federal Chamber of Automotive Industries.

Both the road and off-road segments recorded declines during the first three months of 2017, with road bikes down 15.5 per cent and off-road down 15.3 per cent. The ATV/SS market showed only a small drop of 1.3 per cent.

Scooter sales, which have been in slow decline for several years, also fell 22.3 per cent.

Harley Davidson retained its top-selling status overall among the road bikes with 2,261 sales for the first quarter, followed by Honda (1,943 sales) and Yamaha (1,455).

Polaris led the ATV segment with 1,244 sales. It was followed by Honda with 908 sales, and close behind in third place, Yamaha with 845 sales.

Piaggio remained top-seller in the scooter market with 293 sales. Second place was taken by Vespa with 240 sales, and Honda third with 198 sales.