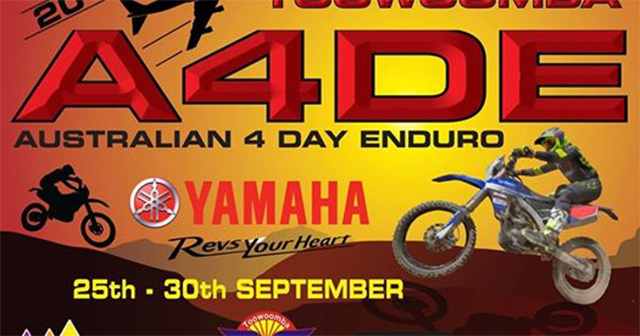 Motorcycling Australia (MA) has made a statement regarding the news that Toowoomba Motor Cycle Club had cancelled the event due to lack of entries.

The post by the Toowoomba Motor Cycle Club has since been retraced.

In a retracted Facebook statement made yesterday (20/08/17), the named host club of the 2017 Australian Four Day Enduro (A4DE) has announced that the 2017 A4DE earmarked for September 25th - 30th will not go ahead as planned.

Both Motorcycling Australia and the State Controlling Bodies are currently working with the TMCC to reach an alternate solution for the successful running of the 2017 A4DE. Details of revisions will be released in due course.

Toowoomba Motorcycle club said on it's Facebook page, "We wish to advise that they are working with Motorcycling Australia in an endeavor to continue on with the 2017 A4DE. Updates will be posted accordingly.