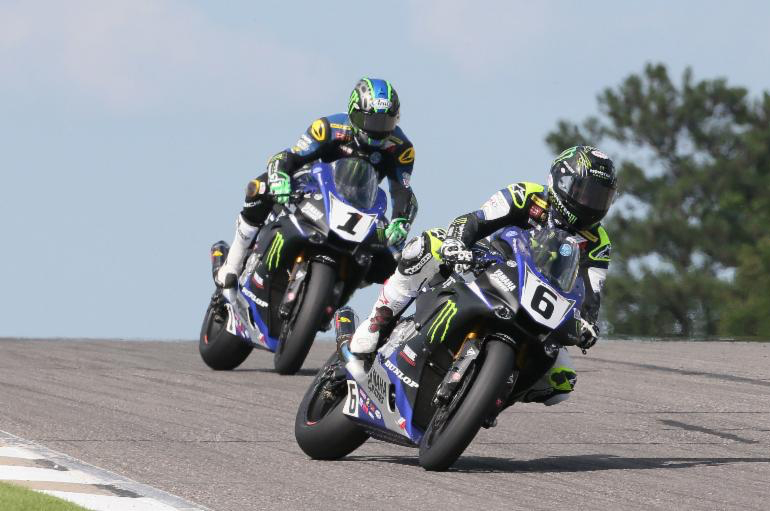 It's a title fight that has gone back and forth, round by round, punch by punch. But now it all comes down to the final round at New Jersey Motorsports Park, September 11-13, to see who will be the last man standing. Only one of them can walk away with the first-ever MotoAmerica Superbike Championship.

This year's battle features the classic case of youth vs. experience, the 22-year-old Beaubier vs. the 40-year-old Hayes. Hayes and his four AMA Superbike Championships vs. Beaubier and his 2013 Daytona SportBike title (now Supersport) and a third-place finish in his rookie season of Superbike racing in 2014. And there's even more intrigue when you throw in the fact that they are teammates.

As for 2015... well, it really couldn't get much closer. Coming into New Jersey, Beaubier has won eight races, including the last three in a row. Hayes also has eight wins under his belt, though momentum swung in Beaubier's direction at the last round at Indianapolis Motor Speedway when the Californian won both races while Hayes finished third in both. The pair had arrived in Indy tied in the championship, but Beaubier left the Brickyard with an 18-point lead and the confidence gained from his two race wins.

"I'd definitely rather be 18 points ahead than 18 points behind," Beaubier said. "I feel like there's a lot pressure for both of us. He's (Hayes) definitely been in this position more times than I have. I'm going to try and treat it as a normal race as much as I can just because I need to be in contention to win the championship.

"Eighteen points is kind of a lot, but we were tied going into Indy and he only got two thirds and it was an 18-point gap pretty quick. Anything can happen. It's (NJMP) a pretty cool track. I've had good success there on 600s, but last year I struggled quite a bit. I crashed out of both races. My speed was there in the dry, but I crashed in the rain race and crashed in the dry while battling with Josh. That pretty much sucked, but all in all I like the track. But I've had good years and bad years there."

Hayes isn't one to lack confidence and he gains even more so with the knowledge that he's won nine Superbike races at New Jersey Motorsports Park, the site of the season finale. He also comes to Jersey with 56 Superbike victories on his resume. Simply put, he's seen this movie before.

One thing Hayes doesn't have, however, is that 18-point lead. It gives Beaubier some wiggle room. Though not much. If Hayes wins both races and Beaubier finishes third in both, the title will go to Hayes. That would put them equal on points, but Hayes would have 10 wins to Beaubier's eight. But if Beaubier were to finish second in one race and third in the other, the title is his. Obviously, finishing in front of Hayes does the trick no matter what.

So if things proceed as they have all season, Hayes needs some help. And if he gets any it will likely come from Yoshimura Suzuki's Roger Hayden, the Kentuckian bringing 13 podium finishes into NJMP - including three ultra-close second-place finishes in the last three races. No one is hungrier for victory than Hayden and his Suzuki team and Jersey offers up his final chance of the season.

"Honestly I'm in a position in my life and my career that it's all pretty simple for me," Hayes said. "I'm in a position where I can have a little bit more perspective on it all. At the end of the day, when the season is over, whether it's eight or 10 race wins that I have and I get second in the championship or first, it's going to be a pretty good season.

"I don't have to live or die by this championship. I think Cameron (Beaubier) is going to feel a lot more pressure than me and I believe in Cameron enough that he's going to get the job done. But I have no problem with tough love and if he opens that door, if he gets nervous, puts in a bad race, tips over or something like that, I will snatch it right out of his hands without thinking twice about it.

"My goals are pretty simple: I have a good track record at New Jersey. I would like to go there and win both races and when the season is over have 10 race wins to his eight - whether I get the championship or not. It is what it is and it's his to win or lose and I will take it at that."

The rest of the top five in the MotoAmerica Superbike Championship are basically locked in. Hayden can play the spoiler in the two races, but barring bad luck he will finish third in the championship. Ditto for his fourth-placed Yoshimura Suzuki teammate, rookie Jake Lewis. Lewis has 90 points on McGraw Insurance-backed Elena Myers.

While the Superstock 1000 Championship has yet to be locked up, Roadrace Factory's Jake Gagne has a firm grip on the title. If he wins race one and TOBC Racing's Taylor Knapp finishes second, Gagne will go into race two with the title in hand. Gagne has 11 race wins on the season thus far and when he doesn't have problems, he wins. If Knapp were to win both races, Gagne would only need to score a total of seven points on the day to take the title.

Mark Heckles, meanwhile, is almost as secure in third place while fourth in the title chase will be fought out between Westby Racing's Josh Day, Motul-backed Tyler O'Hara and HSBK Aprilia's Sheridan Morais. Day is 12 points ahead of O'Hara and 23 ahead of Morais.

The other championship yet to be decided is in the KTM RC 390 Cup Series. Four-race-winner Gage McAllister leads that one by 22 points over Breaden Ortt, who has two wins on the year, with Anthony Mazziotto III and his lone win another 13 points behind in third.

The other two class championships - Bazzaz Superstock 600 and Supersport - have already been wrapped up with Joe Roberts earning the Superstock 600 title and JD Beach taking the Supersport Championship. There's still plenty to play for in the Supersport title chase, however, as Beach's Yamalube/Y.E.S./ Graves Motorsport Yamaha's Garrett Gerloff leads Wheels in Motion/Motosport.com/Meen Motorsports' Josh Herrin by just five points in the battle for second in the championship.

In Bazzaz Superstock, Richie Escalante holds down second in the series point standings over Travis Wyman by 21 points.

The MotoAmerica season finale will be streamed live on motoamerica.com.