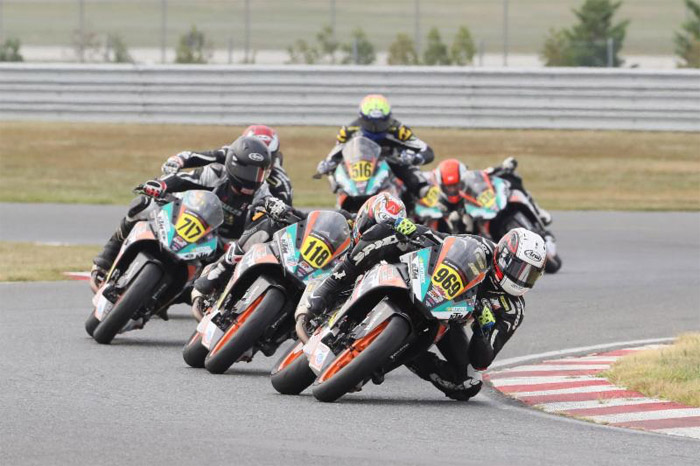 MotoAmerica, in a joint announcement with KTM Motorsports, producers of the KTM RC Cup Series, is pleased to announce a contract extension to include the youth-based spec class for the 2017 MotoAmerica AMA/FIM North American Road Race Series.

As a continuation of KTM's initiative to strengthen youth road racing in the U.S., the KTM RC Cup will enter its third consecutive season with MotoAmerica in 2017. With nearly 40 unique participants in 2016, the KTM RC Cup has provided a platform for young talent to springboard through the ranks of MotoAmerica's premier National series, while providing additional opportunities and exposure for racers to compete globally.

"We are pleased to have the KTM RC Cup back for next year," said three-time 500cc World Champion Wayne Rainey. "The class is working just the way we envisioned it and we've already seen some of the kids making the jump to the next level and having success. I love watching the progress of the kids both on and off the track."

The KTM RC Cup showcases riders between the ages of 14 and 22 years old holding an AMA Superstock Limited license. All riders must race aboard 2015 or 2016 KTM RC 390 Cup bikes. These motorcycles are designed as racing competition bikes (not street-legal) and have been prepared by KTM with over 40 PowerParts and other enhancements to increase racing performance.

To maintain competitive parity, the engine is sealed and may only be serviced by KTM's trackside partner HMC Racing. Modified street-legal KTM RC 390's will not qualify for participation in the MotoAmerica KTM RC Cup Series, but will be allowed in regional racing.

"KTM is happy to continue its partnership with MotoAmerica," said KTM's Motorsports Marketing Manager Christy LaCurelle. "The RC Cup Series has been a great platform for youth riders to get their feet wet in the world of road racing and move on to bigger displacement classes after a season or two of competitive racing in the KTM spec class.

"We are pleased with the growth of the series over the last two seasons and look forward to welcoming new and returning racers to the series in 2017."