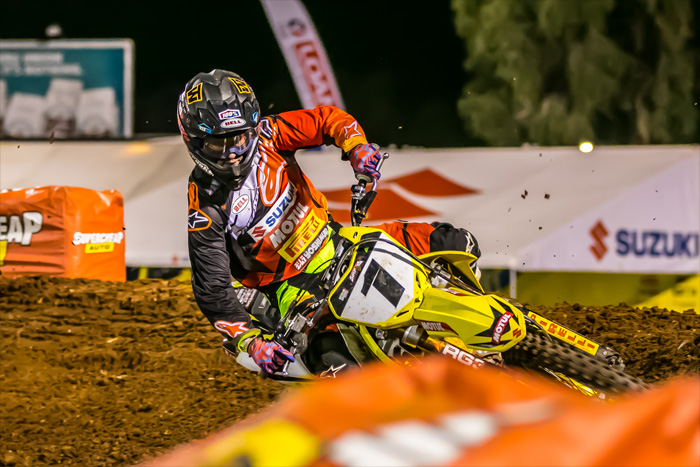 Team Motul Suzuki‰Ûªs Matt Moss has kept his 2015 Supercross podium streak alive with a third place finish at the third round of the Australian Supercross Championship on Saturday night.

Moss headed into the round held at the Wayville Showgrounds in South Australia, sitting in second position in the championship standings off the back of his opening round win and second place finish at round two.

Qualifying third fastest early in the afternoon, the Suzuki RM-Z450 pilot raced to a comfortable second place finish in the opening heat race.

The New South Welshman was once again looking strong when the gates dropped on the second heat race, battling for the lead until he came together with another rider.

A subsequent crash and pile up involving half of the SX1 field left Moss a little worse for wear and his bike needing some attention, with team mechanic Jess Foreman quickly going to work to have the number one plated RM-Z read for action for the nights main event.

With a outside start gate, Moss rounded the tight first turn well back in the pack, but quickly worked his way through the field and into second position.

Moss moved into the lead just after the mid piont of the race and was looking good for his second round win of the year until a slight bobble with just over a lap remaining allowed two riders to sneak through, leaving Moss to finish in third position with the result maintaining his second place standing in the 2015 series standings.

‰ÛÏThat was some good racing out there tonight and the three of us out front separated ourselves from the field quite a bit." Moss commented.

‰ÛÏA third place is good and keeps us in the championship hunt, but I am a racer and want nothing less then to keep that number one plate at the end of the year and stand on the stop step of the podium each week.

‰ÛÏWe have a three week break now before we head back to Jimboomba so we will just put our heads down and work hard in the break and come out swinging at the next round.

‰ÛÏI have to give a huge shout out to Jay and Jess Foreman along with the whole Motul Suzuki team tonight. There was a bit of damage after the pile up in heat two earlier today and as always they had everything ready to go when the gate dropped on the main event.‰Û