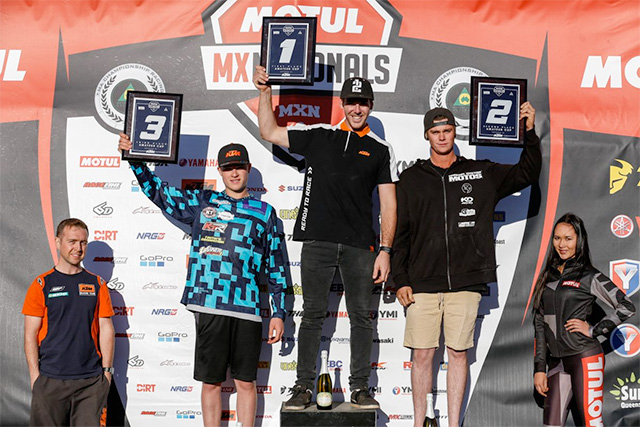 The KTM Australian Amateur Cup class raced for the final time this season at Coolum today, with Kerrod Morrissy claiming the 2017 title on day one of Round 10 of the Motul MX Nationals.

Despite tough competition from a bunch of newcomers, Morrissy proved that consistency pays off today, and despite not finishing on the round podium, it was the KTM rider who had reason to celebrate this afternoon.

The action on track at Coolum got started with the KTM Amateur Cup class this morning, with an incredible 39 riders taking to the circuit for their practice and qualifying session.

Despite high speed winds at the Coolum Pines Motocross Track during qualifying, after 20 minutes on the circuit it was Jordan Flaherty (Husqvarna) who topped the time sheets with a 1:42.081 lap time, also securing the first gate pick. Second fastest on track was last-minute entry Chase Mosig aboard his Yamaha machine (1:42.467), followed by Shane Blinksell (1:44.092) who completed the top three qualifiers. 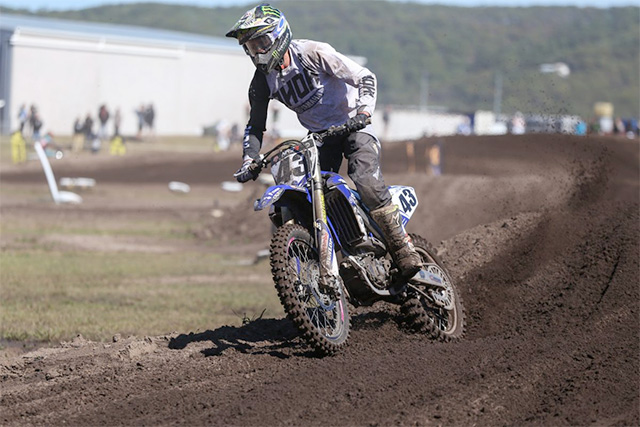 Chase Mosig took the round win. Photo: MXN Images
Following qualifying this morning riders lined up for their first moto of the weekend, and when gates dropped it was the number 22 machine of Jesse Bishop who stormed down the start straight to collect the first Raceline holeshot of the weekend.

After a lap on track, Bishop maintained his lead from fastest qualifier Flaherty, while back in third Ryan Kenney continued to keep the lead pair well within his sights.

With only seven laps making up race one, it wasn‰Ûªt long before Kenney began to close in on Flaherty‰Ûªs rear wheel, and by the time riders headed in to their third lap, KTM mounted Kenney had made the move up into second place.

For Flaherty, the overtaking did not stop there ‰ÛÒ only a few turns later, Mosig also made the move on the Yamaha rider, slotting up into third and relegating Flaherty to fourth.

By the halfway point in race one, Bishop continued to lead from Kenney, Mosig and Flaherty, while behind the top four, was Toowoomba round winner Morrissy, Ryan Hardman and Blake Cobbin.

As race one reached it‰Ûªs closing stages, you could throw a blanket over the top three riders, Bishop, Kenney, and Mosig all within striking distance, and keeping the crowd guessing as to who would have the stamina to hold on to the finish line.

But it all went pear shaped for Kenney on the final lap, the KTM rider going down dashing his hopes of a podium finish.

And when the chequered flag flew it was Bishop who led from the gate drop all the way to the finish line, second place went to Mosig, followed by Flaherty, Morrissy and Hardman who completed the top five. Cory Watts wrapped up race one in sixth, followed by Blake Cobbin, James Maslin, Shane Blinksell and Riley Stevens. 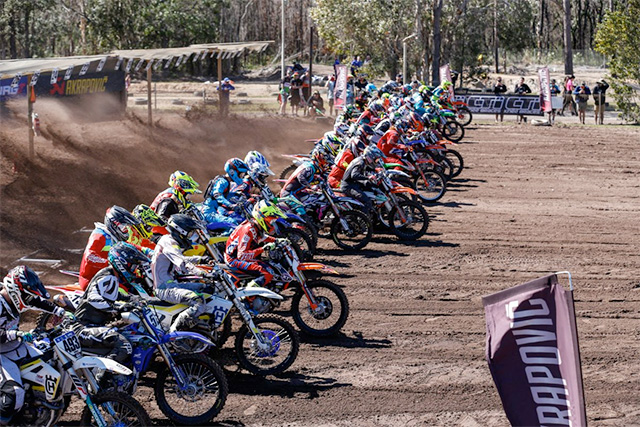 The KTM Australian Amateur Cup riders blast out of the gate.
The second moto took place in windy conditions once again this afternoon, but with a title up for grabs, competitors once again headed out to race for the final time this season.

When gates dropped, Mosig launched off the starting grid and secured the Raceline holeshot, and after a lap, Watts, Kenney and Bishop had slotted in behind him.

With the sandy Coolum surface forming up to be rough and square edged, the Amateur riders had their work cut out for them in their final moto of the year, but one rider who continued to gel with the track was race leader Mosig.

By the third lap, Flaherty had recovered from a mid-pack start and charged his way up to third position, relegating both Kenney and Bishop a spot each in the standings. And from there Flaherty was on a charge, also overtaking Watts and moving in to second position behind race leader Mosig.

As moto two progressed, the top three riders of Mosig, Flaherty and Kenney who had made the move into third separated themselves from the field of riders ‰ÛÒ showing off their skill on the deteriorating Coolum circuit.

And when riders received the last lap board the only position change had come from Bishop who was handed third thanks to a mistake from Kenney.

So when the chequered flag flew for the final time, it was Mosig who crossed the finish line with the final KTM Amateur Cup race victory. Second place went to Flaherty while Bishop wrapped up the final moto in third. Morrissy and Hardman finished in fourth and fifth place respectively, followed by Kenney, Cobbin, Maslin, Watts and Livesey who completed the top ten.

When the points from each moto were calculated, it was Mosig who was awarded the round overall with 2,1 race finishes. Second at Coolum went to Bishop, while Flaherty completed the days‰Ûª podium.

But it was the title they were racing for this weekend at Coolum and it was Morrissy who secured the title by 21 points, second in the championship went to Flaherty, and Cobbin completed the 2017 podium.