More Wins The Aim For Sykes And Kawasaki In France 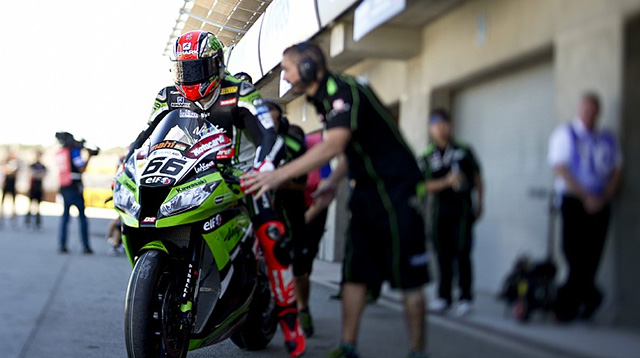 Tom Sykes (Kawasaki Racing Team) arrives in France for the penultimate round of the year in a leading position after his latest race win at Laguna Seca, which makes it seven victories so far in 2013.

Sykes cannot be joined by his regular team-mate Loris Baz, for what would be the 20-year-old French rider‰Ûªs home round, as Loris continues his recovery from a fractured vertebra suffered at the German SBK round in Early September. He should return for the final round of the year in Spain, at Jerez.

As in the USA last week, David Salom will ride in place of Loris on the second official KRT Ninja ZX-10R. A top ten finish in race two in America, David‰Ûªs second ninth place finish underlined the performance level of a machine which has allowed Sykes and Baz to compete at the top each and every weekend, and win races in what has already been an intense season.

Sykes showed real maturity in the American round a few days ago to overcome an unexpected lack of rear traction in race two, especially as he looked on course for a double win following his victory in the opening race during what was his first ever visit to Laguna Seca.

‰ÛÏMagny Cours is a circuit where we had a good result last year and the Ninja ZX-10R worked really well there," Sykes recalled.

"We have improved the bike again this year so I am looking forward to going back there. I hope we can have a good race weekend and hopefully we can have an advantage over our competitors. It is that time of the season and everybody is giving maximum effort. I will have a good discussion with my crew chief Marcel and all my team to be ready for the Magny Cours races. It is much better to be leading than to be behind in the points at this stage.‰Û