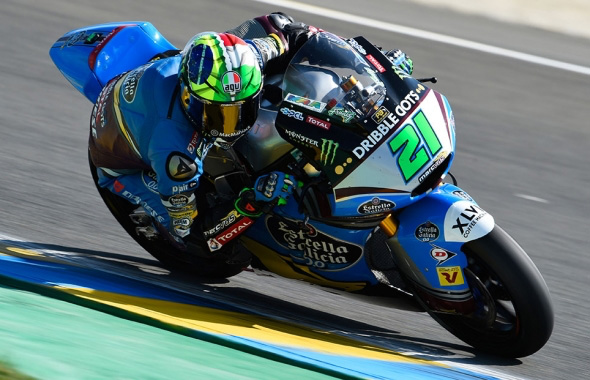 Team Estrella Galicia 0,0 Marc VDS rider Franco Morbidelli heads home to the Italian Moto2 Grand Prix with high expectations that he can power to a first podium finish in the 2016 World Championship.

Morbidelli has climbed to within 10 points of the top six in the rankings after back-to-back fourth place finishes in Jerez and Le Mans, and his main focus this weekend is to fight for a podium in front of a boisterous and passionate home crowd.

Morbidelli‰Ûªs hopes of a top three charge in Sunday‰Ûªs 21-lap race have been heightened after a positive one-day test at the Misano World Circuit Marco Simoncelli earlier this week.

The test gave Morbidelli precious time on track to work on new parts and different machine settings, and he completed an impressive 122 laps to gain valuable experience and data ahead of his all-important home round.

‰ÛÏI‰Ûªm really happy with my performance at the test in Misano because it was the first time this year I have been so fast in a test session." Borbidellis said. "We tried a lot of things on the bike and like always you find some positive and negative points and it is all about working on a compromise.

"The important thing is that the bike we ended the test with is better than the bike I started the test with, so we will try and get confirmation that some parts we tried are better in practice in Mugello. I‰Ûªm really looking forward to this weekend and racing in Italy.

"I‰Ûªve been fourth in the last two races but not really close to the fight for the podium, so my aim is to be right there challenging at the front. After the positive test in Misano I go to Mugello with a lot of power.‰Û