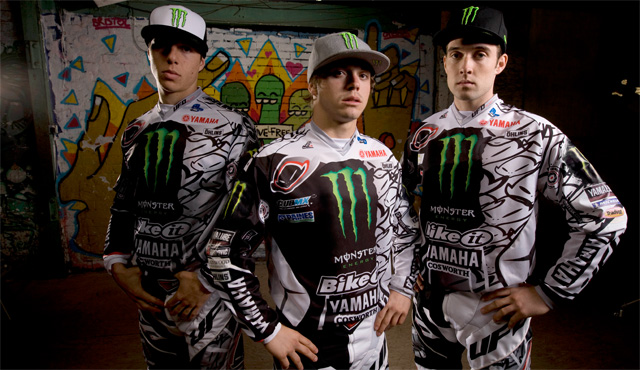 After a strong pre-season period Monster Energy Yamaha's MX2-GP line-up is likely to miss the Grand Prix of the Netherlands this coming (Easter) weekend, the opening round of sixteen in the FIM Motocross World Championship.

Christophe Charlier, Zach Osborne and Arnaud Tonus have picked up minor injuries are all aiming to be fit for action as soon as possible for the long season ahead and it is hoped their absence from the top level will be minimal.

Factory YZ250FM racer Charlier has been forced to the sidelines after a small accident while training in the sand in the Netherlands on Saturday and has broken a small bone in his right foot. The former European Champion underwent successful and uncomplicated surgery today and is now hoping for a return at round two ‰ÛÒ the Grand Prix of Bulgaria ‰ÛÒ on April 22nd but will most likely be making his debut as a works rider on April 29th for the Grand Prix of Italy at Fermo.

Zach Osborne flew home to the USA last week for consultation and surgery on a cracked collarbone and is set to go under the knife tomorrow (Monday) for a procedure to correct ligament damage. It is still too early to determine a new date for active duty but a better estimation will come to light in several days.

Arnaud Tonus joined his team-mates in needing the opinions of a medical team after a fall while leading the second round of the Maxxis British Championship today at Canada Heights. The Swiss dislocated his right shoulder but the joint was re-placed without any significant repercussions. A knock to his left wrist however was subsequently revealed as a broken scaphoid. The young star journeys back to his home tomorrow for further examination and a full plan of recovery.

Current British Championship leader, Mel Pocock, who was slated to compete in the European Championship on the YZ250F, is slated to be one of the replacement riders for Valkenswaard.