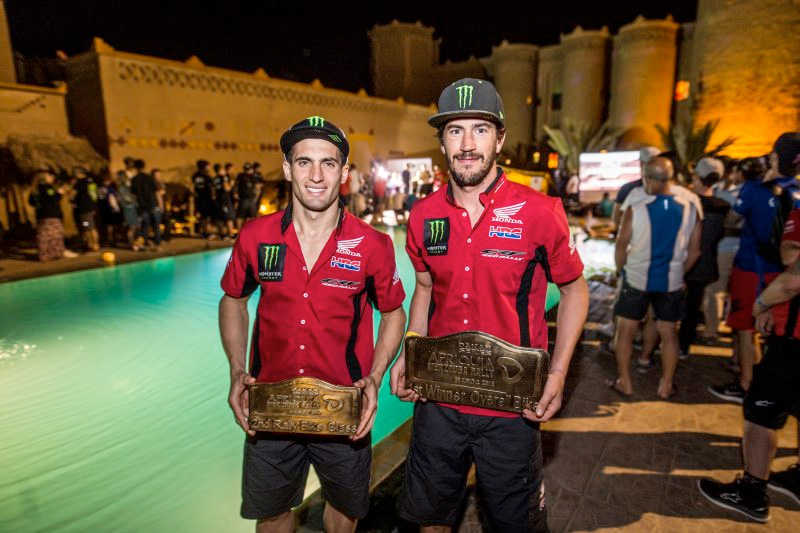 Joan Barreda and Kevin Benavides with their first and second place trophies.
The Merzouga Rally, held in Morocco during the week, proved to be another tough test for the Monster Energy Honda Team.

The team accomplished their mission with flying colours, achieving an outstanding final result as well as being able to substantiate the reliability of the Honda CRF450 RALLY.

After starting the 2018 season in the United Arab Emirates with the Abu Dhabi Desert Challenge ‰ÛÒ the first race of the FIM Cross-Country Rallies World Championship ‰ÛÒ the Monster Energy Honda Team campaign continued with its ultimate goal of chalking up more mileage and further experience of sand and navigation in the deserts of the Merzouga Rally. 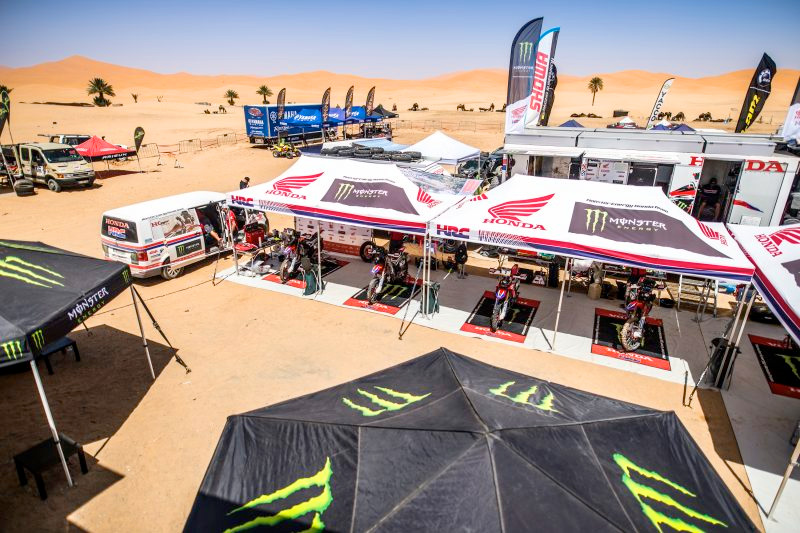 The Monster Energy Honda Team setup at the 2018 Merzouga Rally that was run in Morocco.
The team appeared with the full lineup of top riders, Argentine Kevin Benavides, Portuguese Paulo GonÌ¤alves, American Ricky Brabec and Chilean JosÌ© Ignacio Cornejo. Also back in the battle, after two months out after an operation for a double left wrist fracture, was Spaniard Joan Barreda.

The final Merzouga Rally balance sheet for Monster Energy Honda Team looked as good as it gets. The team laid down the gauntlet with a win in the prologue and then snatched four wins out of five special stages. The squad didn‰Ûªt let up and commanded throughout the 900 kilometres of timed sections, with the two most outstanding riders, Joan Barreda and Kevin Benavides, occupying the top two final overall positions.

Other members of the team, likewise turned out fine performances, such as Ricky Brabec, who set a fast pace to finish fifth in the general rankings, with two podium places. JosÌ© Ignacio Cornejo was eighth, and continues to progress within the team structure and Paulo GonÌ¤alves, twelfth, goes on clocking up more mileage on the Honda CRF450 RALLY and is almost back to full fitness after the injuries that kept him out of the Dakar 2018. 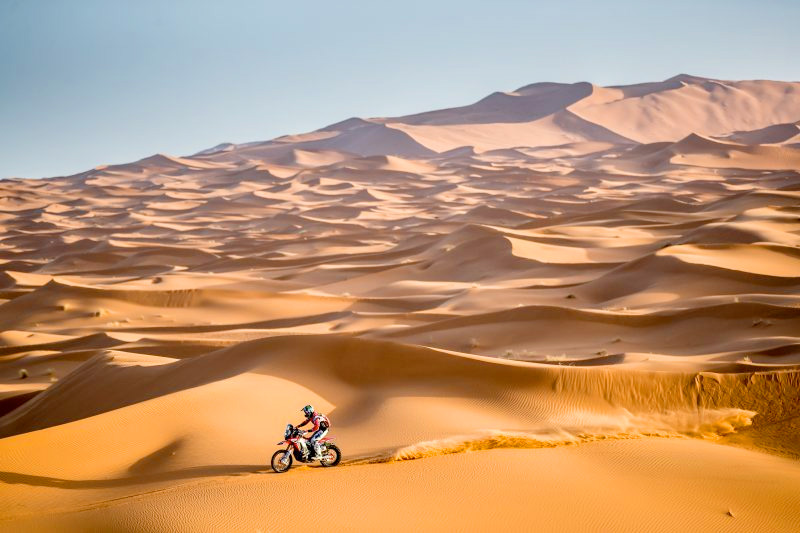 The Honda CRF450 Rally bike never suffered any mechanical dramas throughout the 1500-kilometre of the 2018 Merzouga Rally which included a whole lot of desert.
Monster Energy Honda Team Manager - Raul Castells, was very happy with the outcome. "Obviously, the team is very satisfied with the way the participation in this Merzouga Rally went. The decision to race in Morocco has been confirmed as a success, given that many of the rivals in the competition are those who also fight to win the Dakar Rally. In addition, in this race, navigation was one of the key aspects; it was very challenging and our riders clearly made the most of it to improve their navigation reading skills, with high-level riding throughout on a par with the standards of the Dakar.

"Joan Barreda and Kevin Benavides were outstanding and we hope that they continue at this level for the rest of the season. Likewise, we hope that the rest of the team will also continue to improve on their bikes. We should also point out that the Honda CRF450 RALLY has not given the slightest hitch over the 1500-kilometre race, which is a great endorsement for its mechanical strength. 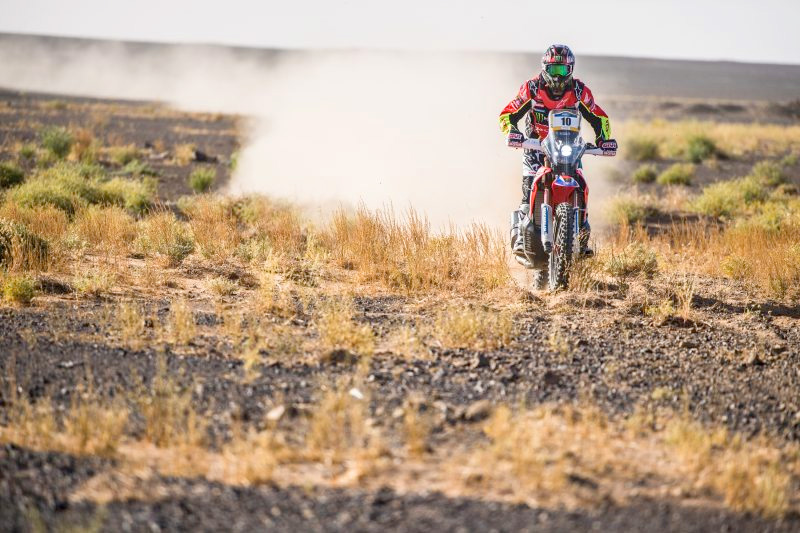 Joan Barreda on his way to the 2018 Merzouga Rally win.
"The participation and the results in this race encourage us to continue along this line at the highest level for the remainder of the season and we should be in top shape when we reach the 2019 Dakar; not only the riders, but also the rest of the staff, the mechanics and the team, who have done a great job here. Finally, I‰Ûªd also wish to thank Honda and HRC for the great support that they have given to the team and to the sponsors who have placed their trust in us," Castells concluded.

The team will continue with the planned work schedule for the 2018 season with some private testing and subsequently the participation in the Atacama Rally, the third round of the world championship to be held in Chile from 12th to 18th August in CopiapÌ_ in the northern region of the country. 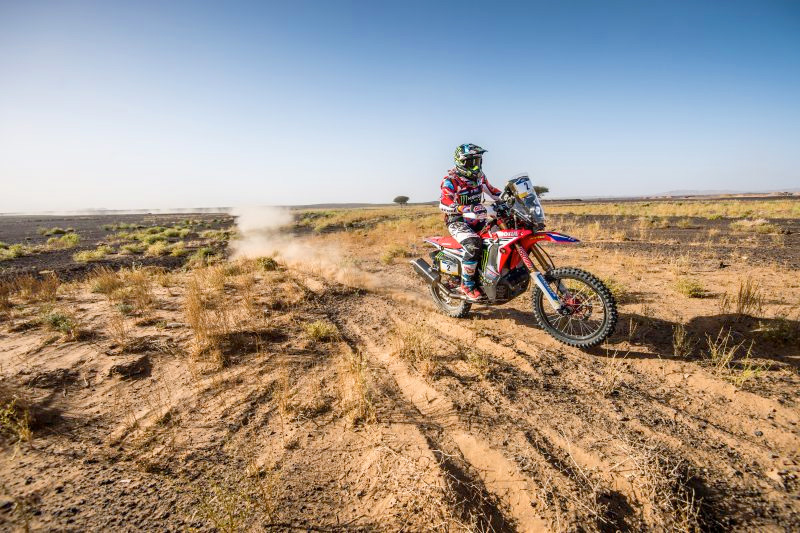 Kevin Benavides took his Honda CRF450 Rally bike to second place to give the Monster Energy Honda Team the 1-2.