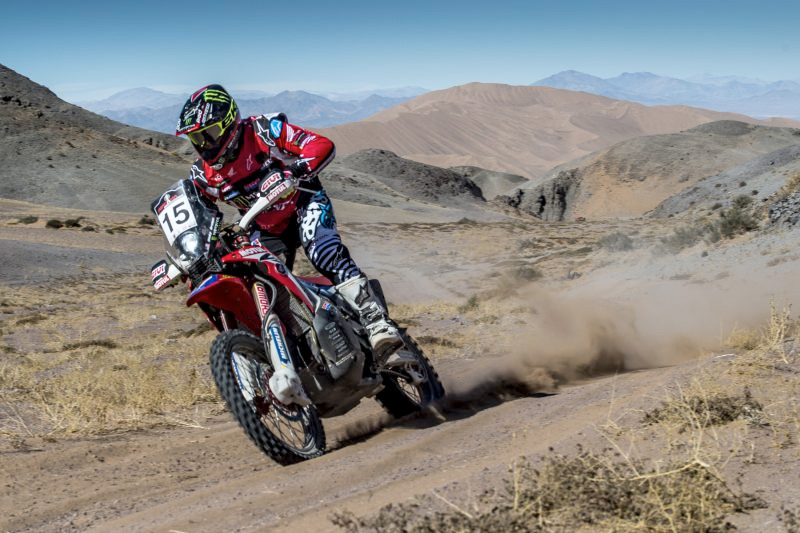 Just a month and a half after finishing the Silk Way Rally, one of the season‰Ûªs most gruelling races, the Monster Energy Honda Team engines are once again ready to roar into action for another FIM Cross-Country Rallies World Championship event: this time the Atacama Rally.

An 18,000-kilometre distance separates Dunhuang, where the Silk Way Rally concluded, from CopiapÌ_, the Chilean city where the Atacama Rally is due to kick off in early September.

The third date in the Cross-Country Rallies calendar begins on 1st September with the scheduled administrative and technical shakedown ahead of the curtain-raising prologue on the 2nd. In store are five stages in the Atacama Desert, the world‰Ûªs most arid wilderness, which is set to include some 1200 kilometres of special stage against the clock.

The three riders who had previously competed in the opening two rounds of the world championship will be joined by American rider Ricky Brabec, who returns to the Chilean desert after the eighth overall place taken in the 2018 edition.

Although the race organisation has announced some new stretches, the race route remains basically the same as the previous edition, with a single bivouac in Tierra Amarilla, less than 10 kilometres from CopiapÌ_ and will include a marathon stage where riders are not allowed to receive any outside mechanical assistance.

After the Silk Way Rally, Kevin Benavides holds third position in the overall world championship standings with 51 points. Team-mate JosÌ© Ignacio Cornejo lies in fifth position on 40 points and is second in the Junior category. Joan Barreda, with 22 points, is in eighth spot.