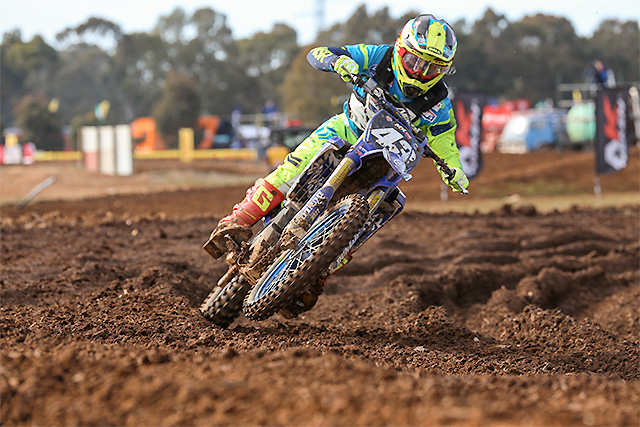 On a cold yet, near perfect winters day, Serco Yamaha's Mitchell Evans kept his MX2 championship hopes alive taking a third place finish at the seventh round of the Motul MX Nationals at Shepparton.

Evans started the day in fine form, winning the opening Motul MX2 moto on his Serco Yamaha. Evans nailed a good start and found himself in second place and settling into the race nicely. By lap six, he had clawed his way up to the leader and piled on the pressure. He slipped by on lap seven and charged all the way to the end of the 30-minute race to take a nine second win over his nearest championship rival, Wilson Todd.

A poor start in moto two left Evans mid pack at best as the field roared off for their final moto of the day. With moto two only 20 minutes in duration, there was no time to waste and Evans put his head down and picked off as many riders as he could. He managed to find himself in fourth place after a desperate opening sprint but a fall slowed his progress and he remounted back in seventh place.

He made a couple more passes before the end of the race and scrambled back to fifth place and limited thee points damage in a spirited ride. His 1-5 results saw him claim third on the day and keeps him within eight points of the championship lead.

‰ÛÏI felt I was riding well today and I like the Shepparton track,‰Û