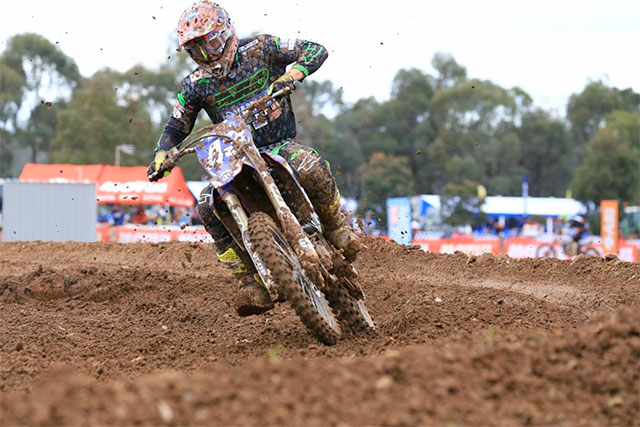 Yamalube Yamaha Racing Team‰Ûªs Mitchell Evans has gone undefeated for the second time this season, and secured the Pirelli MXD red plate after a dominant outing at Round 8 of the Motul MX Nationals at Shepparton in Victoria today.

When the Pirelli MXD class headed out for their qualifying session this morning, Yamalube Yamaha Racing‰Ûªs Evans took no time at all to shoot to the top of the time sheets, putting down a 1:42.252 lap time, ahead of Raceline Pirelli KTM‰Ûªs Wade Kirkland and Yamaha‰Ûªs Lochie Latimer who who finished this morning‰Ûªs session with second and third picks of the grid.

When bikes headed to the line for their first concrete start of the weekend, smoke poured off the Pirelli MXD rider‰Ûªs tyres, with competitors doing their best to warm their starting pads up, ahead of race one commencing. And when gates dropped, it was KTM‰Ûªs Luke Abela who took the MXstore holeshot, however it only took two turns for red plate holder Connor Tierney to move in to the race lead.

But, after going undefeated at Conondale, Evans was carrying significant momentum in to Round 8, and before long had capitalised on a mistake from Tierney ‰ÛÒ moving in to the top spot, followed by Abela and Kirkland.

After three laps, Evans had stretched out his lead to an impressive 14 seconds, leaving the fight for remaining positions to happen behind him, and fight they did. Before long, Husqvarna‰Ûªs Zak Small had made the pass on Kirkland for third, where he then eyed off Abela, and after a few turns had made a successful pass on Abela‰Ûªs KTM machine to move in to an impressive second position.

Unfortunately for Abela, Small‰Ûªs pass would only be the first ‰ÛÒ Kirkland becoming the second rider to follow suit - redeeming himself to make the pass back for third place, relegating Abela to fourth.

Once riders had reached the half way point in moto one, the running order saw Evans with a commanding race lead, followed by Small, Kirkland, Husqvarna‰Ûªs Justin Hart and Abela who completed the top five. A notable absentee from the front of the pack was Tierney, who was back in 11th position.

With two minutes left on the clock for the MXD competitors, there had been no change to positions, however Evans had stretched out his lead to an unbelievable 28 seconds.

So when the chequered flag flew, Evans had plenty of reason to celebrate, taking an emphatic race one victory, from Raceline Pirelli KTM‰Ûªs Kirkland who managed to make his way up to second, followed by Small who dropped back a position but wrapped up race one in third.

When race two kicked off, once again it was Evans who got to the early race lead, followed by Small and Kirkland in second and third behind him.

With the track rougher and ruttier than many riders had seen in years, navigating the Shepparton circuit this afternoon proved to be much more difficult than many had expected.

However, the competitors in the Pirelli MXD class rose to the occasion, and by the time moto one had reached the half way mark, Evans once again showcased his dominant form out in front, followed by Small, Kirkland and red plate holder Tierney.

With four minutes left on the clock, there had been little change to the running order, with competitors all settling in to their respective positions, so when the last lap board was shown, once again Evans was in the box seat to take his fourth consecutive race win over the last two rounds.

And when the chequered flag flew, Evans went undefeated, taking the final race win from Tierney who had shot from fourth to second position in the closing stages of the race, while Kirkland crossed the line in the final moto in third.

Pozniak wrapped up the final race of the day with a consistent fourth place, followed by Kaleb Barham who completed the top five finishing positions.

With 1,1 results once again, Yamalube Yamaha Racing Team‰Ûªs Evans was awarded with the Round 8 victory, while second place on the podium was taken by Raceline Pirelli KTM‰Ûªs Kirkland, and third was snatched up by KTM‰Ûªs Pozniak.

‰ÛÏI‰Ûªve definitely got a lot more confidence after this round, going 1,1 gives you a lot of confidence and it‰Ûªs good for the points chase so I couldn‰Ûªt be happier,‰Û