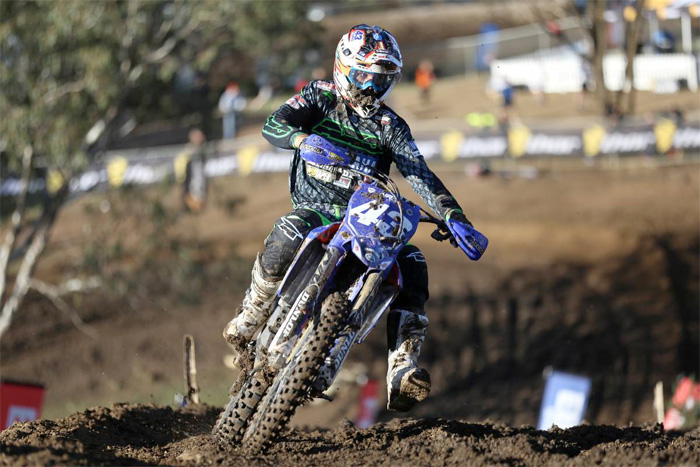 Yamalube Yamaha Racing‰Ûªs Mitchell Evans topped the Pirelli MXD standings at round three of the Motul MX Nationals at Broadford today, proving that consistency was the key to finishing on the podium at the State Motorcycle Complex.

The historic Broadford venue dished out plenty of character building conditions to the Pirelli MXD competitors today, with many riders experiencing their first ‰Û÷national mudder‰Ûª at round three of the Motul MX Nationals.

With qualifying cancelled due to the wet conditions, the MXD class was provided with a 20-minute free practice session to get accustomed to the Broadford track this morning, with riders then awarded gate picks in the order of championship standings for racing.

When bikes lined up for moto one just after lunch, the Pirelli MXD class competitors thankfully were treated to a track that was beginning to dry out, and when gates dropped it was SD3 Husqvarna‰Ûªs Kaleb Barham who managed to take advantage of the improved conditions to take the first MXstore holeshot and move in to the race lead.

With three laps in the books Barham looked comfortable out in front, while Yamaha‰Ûªs Lochie Latimer found his way in to second position ahead of Raceline Pirelli KTM‰Ûªs Wade Kirkland.

By the time the race had reached the ten-minute mark, the positions at the front had changed, with Latimer capitalising on a mistake from Barham allowing him to move in to the race lead, while Yamalube Yamaha Racing‰Ûªs Evans was also able to get by the Husqvarna rider to move in to second. Barham was then forced back to third position followed by red plate holder Connor Tierney who had managed to get by Kirkland and move in to fourth place.

Things then deteriorated again for Barham who dropped back to fifth position - dashing any hopes of a race one win despite a solid start to moto one.

With less than four minutes of the race remaining, Evans began to challenge Latimer for the race lead, but Evans also started to feel the pressure from third placed Tierney who had found his way on to the rear wheel of his Yamaha opponent. The three were then separated by only a bike‰Ûªs length each, putting on a performance for the crowd, which saw the opening Pirelli MXD moto go down to the wire.

But it was Yamalube Yamaha‰Ûªs Evans who entered the final lap as the race leader, while Latimer was only just holding off a hard charging Tierney in third, followed by KTM mounted Kirkland in fourth.

And when the chequered flag flew, Evans proved he had the determination to get the job done, taking the Pirelli MXD moto one win, ahead of Latimer who put in one of his career best rides to finish in second, while series points leader Tierney crossed the line in third.

When the final race for the Pirelli MXD Class got underway, Barham once again showcased his starting capabilities, but it was the Yamalube Yamaha pair Hill and Evans who shot into positions one and two, relegating Barham to third - and it was there that the Yamahas stayed.

With four laps in the books, and Hill and Evans out in front, Barham then came under fire from youngster Pozniak (KTM), who managed to make the pass on the Husqvarna rider and move in to third position. However, Pozniak also wouldn‰Ûªt stay there for long ‰ÛÒ Raceline Pirelli KTM‰Ûªs Kirkland was the next rider to make the move and slot in to third, while Barham and Pozniak followed closely behind.

With only a few laps remaining, the running order continued to see Hill lead from his Yamaha teammate Evans, followed by Kirkland, Barham and Pozniak who completed the top five. Red plate holder Tierney was only just outside the lead pack in sixth position, while Latimer who took second place in moto one, held down seventh.

But it was Yamaha mounted Hill who crossed the finish line in the final Pirelli MXD race victorious, followed by his teammate Evans who wrapped up moto two in second, followed by Raceline‰Ûªs Kirkland who put in an outstanding performance to finish in third. Pozniak and Barham concluded raced two in fourth and fifth places respectively.

When results were combined from both Pirelli MXD motos, it was Evans‰Ûª consistent 1,2 results which handed him the round three bragging rights, teammate Hill secured second position overall, while Kirkland‰Ûªs fourth and third race results awarded him his first senior podium in third.

‰ÛÏMy starts let me down a little bit today, so I need to go back and work on them ‰ÛÒ I sort of made getting on the podium a bit difficult for myself (laughs),‰Û