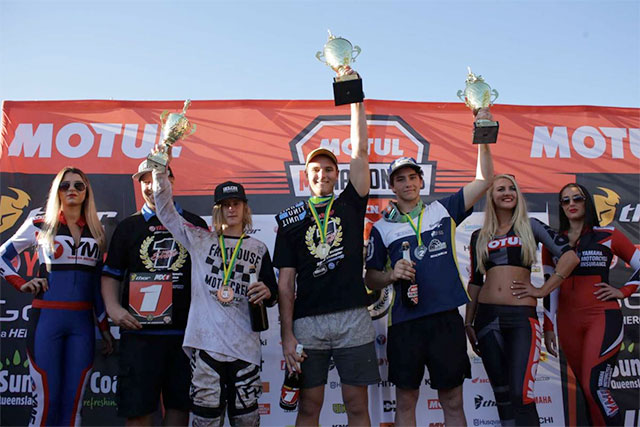 Yamalube Yamaha Racing Team‰Ûªs Mitchell Evans secured the first senior motocross title of his career, racing to a Pirelli MXD Championship victory at Round 10 of the Motul MX Nationals at Coolum on Sunday.

The youngsters of the series had plenty to ride for this weekend, with all riders showing thousands of spectators why the future of the sport is in good hands.

The Pirelli MXD class were the first bikes to hit the track for racing at Coolum this morning, and with fans pouring through the gates, the class was treated to a full house of spectators for moto one.

After qualifying fastest yesterday and holding a 15-point lead in the championship heading in to the final round, all eyes were on the Yamaha machine of Evans when gates dropped for race one this morning, but it was KTM‰Ûªs Cooper Pozniak who snatched up the first MXStore holeshot, followed by Husqvarna‰Ûªs Connor Tierney.

After only a few turns though, there was carnage left right and centre, with riders dropping their machines all over the the track, and when bikes headed in to lap two, Raceline Pirelli KTM‰Ûªs Wade Kirkland was the new race leader.

In what was a huge upset to red plate holder Evans, a crash during lap one saw him forced to re-join the race at the rear of the pack, and on a mission to make up positions in order to keep his championship hopes alive.

After only a few laps, Kirkland stretched out his lead to an impressive six seconds, leaving Pozniak and and Husqvarna‰Ûªs Justin Hart to fight for second place behind him. But what was the real shock to spectators, was that by lap three Evans was back in 26th position.

By the time race one reached the halfway mark, Kirkland continued to hold on to the race lead followed by Pozniak and Husqvarna‰Ûªs Tierney who had recovered from an earlier mistake to slot in to third. Hart had dropped to fourth position, followed by Luke Abela (KTM) in fifth.

Unfortunately, things went pear shaped for race leader Kirkland on lap six, the KTM rider dropping to third place, allowing Pozniak to inherit the race lead, followed by Tierney who also moved up to third. But the action on track didn‰Ûªt stop there ‰ÛÒ with only two laps remaining Tierney went down, his bike ending up in a dam, however the championship hopeful re-joined the race in ninth position with significant damage to his Husqvarna machine.

So when riders received the last lap board in moto one, one thing was clear and that was that the Pirelli MXD Championship was still up for grabs. But when the chequered flag flew, it was Pozniak who breezed to the opening moto victory, followed by Husqvarna‰Ûªs Zak Small who put in an impressive charge late in the moto to wrap up race one in second, followed by Barham who finished in third. Despite leading for a good portion of the race, Kirkland concluded the opening moto in fourth, followed by Dylan Wood (Kawasaki) in fifth.

When bikes lined up for the final race of the season this afternoon, riders knew that champions would be crowned after only 20 minutes‰Ûª time, and when gates dropped, Husqvarna‰Ûªs Barham got to the early race lead, however after only one lap Tierney had made his way in to the top position.

With three laps in the books, Tierney looked dominant out in front, while Raceline Pirelli KTM‰Ûªs Kirkland had made his way past Barham to take second place, followed by Small who was back in third.

Once again championship contender Evans was outside the top five in sixth position, however with a 2016 title on his mind, the Yamalube Yamaha Racing Team rider looked to be opting to play it safe in moto two.

As race two progressed, Tierney began to come under fire from Kirkland who was determined to finish on the podium at Coolum, and by the time riders headed in to lap nine, spectators were greeted by a new race leader, with Kirkland moving in to the top spot.

With Kirkland out in front, Tierney also began to feel the pressure from Barham who was edging closer and closer to the Husqvarna athletes rear wheel, and by the time riders received the last lap board, Barham had made the pass, relegating Tierney to third.

Despite being back in fourth position, when Evans‰Ûª crossed the line for his final lap this afternoon, the Yamalube Yamaha rider was it the box seat to wrap up the Pirelli MXD Championship.

So when the chequered flag flew for the final time today for the Pirelli MXD class, it was Kirkland who secured the final race win, from Tierney who pipped Barham on the line to finish in second, while Barham wrapped up the final race in third.

With a win in the final moto, Kirkland secured the final round victory at Coolum, while Pozniak and Barham occupied second and third positoins on the Round 10 podium.

But it was Evans who had reason to celebrate this afternoon ‰ÛÒ the young North Queenslander taking his first ever Pirelli MXD Championship at Coolum. Second place in the championship was taken by Husqvarna‰Ûªs Tierney, while Pozniak‰Ûªs consistency throughout the season saw him rewarded with third.