Mitch Evans flawless in the Pirelli MXD class at Toowoomba 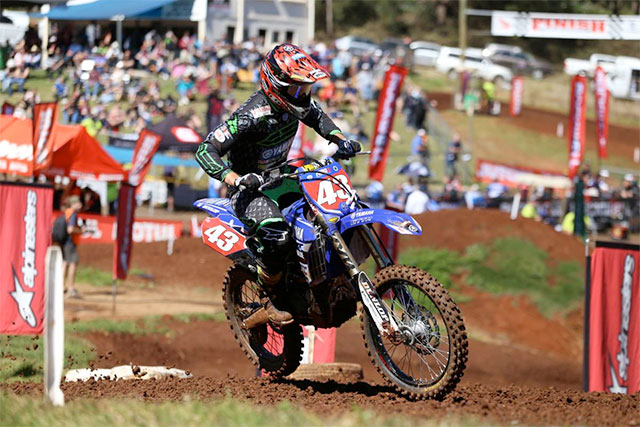 The Pirelli MXD class roared back to life at Echo Valley today, with Yamalube Yamaha Racing Team‰Ûªs Mitchell Evans once again going undefeated across two races at Round 9 of the Motul MX Nationals at Toowoomba.

With only a single round left until this year‰Ûªs champions are crowned, the Pirelli MXD class impressed tons of fans who turned out for Round 9 today, with Evans and his competitors showcasing to the crowd the promising future of our sport.

With this morning‰Ûªs qualifying session taking place in perfectly sunny conditions, riders took advantage of the Queensland weather, putting down their fastest lap times and setting the pace for the day‰Ûªs racing. At the conclusion of the 25-minute practice and qualifying session, Yamalube Yamaha Racing Team‰Ûªs Jordan Hill secured the first pick of the grid with a 1:51.284 lap time, followed by Husqvarna‰Ûªs Kaleb Barham (1:52.204), and Connor Tierney (1:52.269).

When race one kicked off for the Pirelli MXD class, it was Barham who capitalised on a solid start and moved in to the race lead, however fastest qualifier Hill and Raceline Pirelli KTM‰Ûªs Wade Kirkland were hot on his tail.

But all new MXD red plate holder Evans was determined not to let the championship lead slip through his fingers, and after only one lap had made his way up to third position behind team mate Hill. However only moments later, Evans inherited the race lead, with Barham and Hill getting caught in the top section of the track, forcing both riders to drop positions.

From there, Evans stretched out his lead to a whole five seconds, while Hill recovered to slot in to second position ahead of KTM‰Ûªs Cooper Pozniak and Billy Harth. Kirkland unfortunately lost numerous positions on the same lap with a bike issue.

With seven laps in the books, the Yamalube Yamaha Racing Team duo Evans and Hill had separated themselves from the rest of the field, while Pozniak continued to maintain third position, followed by Husqvarna‰Ûªs Tierney in fourth.

As moto one reached it‰Ûªs closing stages race leader Evans began to come under fire from teammate Hill, setting up the final laps as a dash to the finish line - but despite Hill‰Ûªs every effort, it was Evans who crossed the finish line with the race one victory, followed by teammate Hill in second and Pozniak in third.

In the final race for the Pirelli MXD class, Yamalube Yamaha Racing Team‰Ûªs Evans wasted no time in getting to the early race lead once again, however this time it was Pozniak who was hot on his tail.

But after five laps, Pozniak began to feel the pressure from Raceline Pirelli KTM‰Ûªs Wade Kirkland, who was on a mission to claw back points after a bike issue in race one ‰ÛÒ Kirkland eventually making the move up to second position with more than half the moto remaining.

Unfortunately for Pozniak, a mistake on lap six allowed Tierney, Barham and Hill to get by him too ‰ÛÒ the young KTM rider slipping back to sixth position.

At the eight lap mark in race two for the Pirelli MXD class, Evans continued to maintain control from Kirkland in second and Tierney in third. Yamalube Yamaha‰Ûªs Hill was back in fourth position, followed by Husqvarna mounted Small.

But it was Evans‰Ûª who couldn‰Ûªt be stopped at Toowoomba today, and by the time the chequered flag flew on the final moto, the Yamalube Yamaha rider had gone undefeated once again. Kirkland crossed the line in second position in race two, followed by Tierney and Hill who wrapped up moto two in third and fourth places respectively.

With two wins from two races at Round 9, Evans was awarded with the overall round victory, while teammate Hill secured second position on the Pirelli MXD podium, followed by Tierney in third.

Evans has now extended his Pirelli MXD Championship lead out to 15 points with one round remaining.

‰ÛÏThe goal coming in to Round 9 was to try and win both motos and give myself a bit of a points buffer for the final round, and we definitely achieved that at Toowomba today.

‰ÛÏI‰Ûªve been a bit unwell the past week, so I‰Ûªm pretty happy with what I achieved even though I‰Ûªm sick. I rode the best I could, got some good starts, and managed to make some quick passes, so it was a solid day for me.

‰ÛÏTo stretch out my lead, and to go into Coolum in a healthy position in the championship takes the pressure off a little, but the plan is to go 1,1 there and finish off the season on a perfect note.‰Û