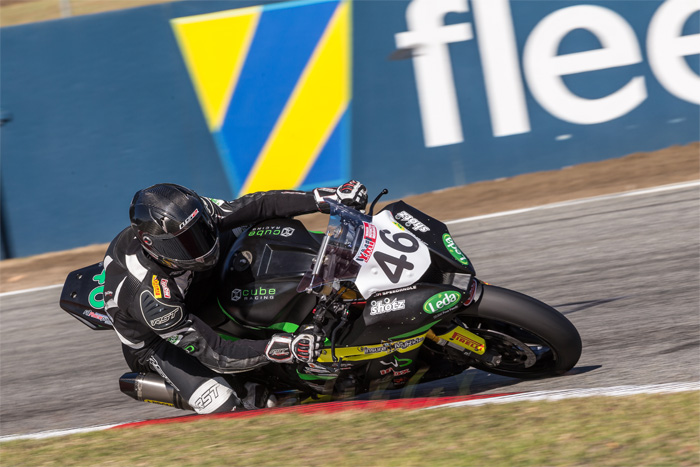 Mike Jones (Australian Outdoor Living Cube Racing Team) has again stamped his authority on the Superbike class at the third round of the 2015 Yamaha Motor Finance Australian Superbike Championship presented by Motul Pirelli winning both races in the Yamaha Motorcycle Insurance Superbike class to take the overall honours from JD Racing‰Ûªs Daniel Falzon.

Falzon got the perfect start with a wonderful jump off the start and moved straight past Jones in pole, leading at turn one with Ryan Hampton (Next Gen Motorsports) moving into third spot.

After two laps Falzon and Jones began separating themselves from the field, while behind them Stronach completed the fastest lap of the race with a 56.682 to move into third.

Despite Falzon holding the lead through three laps, Jones made his move down the straight at the start of the fourth, and passed the Yamaha rider into the first turn.

Behind them Cameron Stronach was holding firm in third with Hampton doing well to keep Ben Stronach (Northside Timber Flooring) at bay.

Both Jones and Falzon broke the 56-second lap barrier on lap six, with Jones first clocking a 55.974 before Falzon recorded a 55.941.

Behind them a mishap on lap seven saw Ben Stronach slip back to seventh, with McFadden moving into fifth and Ben Henry (Australian Outdoor Living Cube Racing Team) pushing up into sixth at the halfway mark of the race.

Meanwhile Jones was looking comfortable in front setting the pace from Falzon, though after 10 laps the gap was less than half a second.

Cameron Stronach in third was over eight seconds behind the pair.

Hampton misjudged a corner on lap 10 dropping him back into sixth, as McFadden and Henry moved into the top five.

Henry soon moved into third spot and was looking good before he ran wide at turn one on lap 12 and re-entered in ninth.

McFadden moved up into third when he passed Cameron Stronach, but remained nearly 12 seconds behind the leading pair with two laps to go.

In the meantime Jones had opened the gap up to more than one second on Falzon, and the Cube Racing Team pilot held on to win the opening race of the class.

Falzon rode well but was forced to settle for second with McFadden holding on to claim a podium spot from Cameron Stronach, Hampton and Ben Stronach.

Falzon again got a great start off the line in race two, but Jones held his nerve to head into turn one with the lead.

Behind Falzon were Cameron Stronach, McFadden and Hampton with local rider Adam Senior (Senior Engineering) moving up into sixth position.

Towards the end of the opening lap Falzon passed Jones to take the lead, but he could not shake the Kawasaki rider who was hot on his heels.

Stronach was looking to make a name for himself on his home track and stayed within touching distance of Jones, as the trio put a 2.5 second buffer on McFadden in fourth.

McFadden was leading a pack of five riders that were separated by a mere second, while Falzon was doing his best to keep Jones at bay.

Coming through the back of turn one on lap seven Jones made his move ‰ÛÒ passing Falzon up the inside and taking control of the race.

On lap nine Henry moved into fourth spot ‰ÛÒ edging his way past McFadden, while Hampton, Ralph Mammoliti (Kawasaki Motors) and Senior continued to battle behind them.

Jones powered away and with 14 laps completed in the race, the gap to Falzon was out to five seconds.

The result was a formality as Jones rode home to claim his second win from two races and sweep the round.

Falzon finished the race in second ahead of Cameron Stronach, while Henry and Hampton rounded out the top five.

Falzon‰Ûªs two second-placings was enough to give him second overall for the round, while hometown hero Cameron Stronach claimed the overall third spot.

The result has given Jones a 29-point lead in the championship standing from Falzon, with Kiwi a further 18 points behind in third.