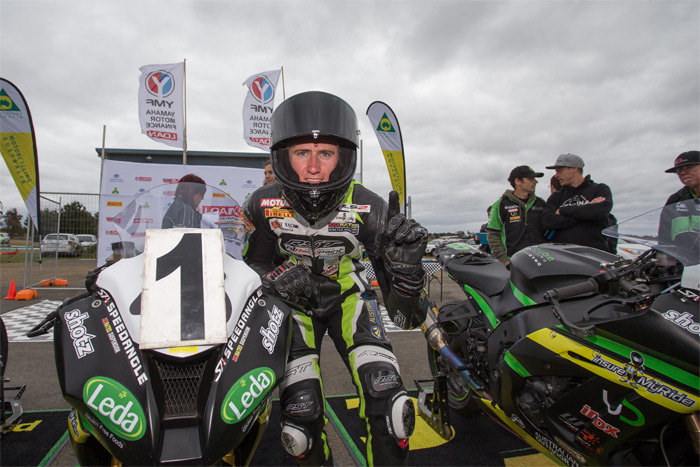 Mike Jones (Australian Outdoor Living ‰ÛÒ Cube Racing Team) has been crowned the 2015 Champion at the fourth round of the 2015 Yamaha Motor Finance Australian Superbike Championship presented by Motul Pirelli.

Jones took advantage of a second race mishap from closest rival Daniel Falzon (JD Racing) to take both race wins at Symmons Plains in Tasmania, and establish an unassailable 60-point championship lead heading into the final round.

In cold conditions in front off more than 4,000 spectators, Jones put on a clinic to win the round from Kiwi Ryan Hampton (Next Gen Motorsports) and teammate Ben Henry.

In the opening race of the day Falzon charged off the line into first place with Jones having so settle for second.

Hampton held his spot on the grid to settle in third position, while Henry (Australian Outdoor Living ‰ÛÒ Cube Racing Team) and Brett Simmonds rounded out the top five through the opening lap.

Jones took his opportunity at the slight right-hander at the end of lap two ‰ÛÒ passing Falzon and recording a 54.672 to signal his intentions.

Behind the front pair, Hampton, Henry and Simmonds had spaced themselves out ‰ÛÒ with Simmonds more than two and a half seconds ahead of Quentin Blazely (Cycleworld) in sixth.

With first and second looking pretty well locked away, all eyes were on Hampton and Henry who were in an intense battle for third.

At the halfway point of the race the gap between the pair was a mere .114 of a second, and on lap nine Henry made the pass on the home straight to move into third.

Henry looked great on the circuit and set about chasing Falzon down ‰ÛÒ and you could have been forgiven for thinking he was every chance as he began to gain ground.

By the last lap the gap was only half a second but he was unable to make the ground ‰ÛÒ Henry settling for third, Falzon claiming second, and Jones miles ahead to claim the win.

Hampton finished the race in fourth with Brad Wooton (North West Motorcycles) in fifth ‰ÛÒ after local hopeful Simmonds came unstuck on the very last corner to give up fifth and register a DNF, ending his day.

It caused a red flag meaning riders were forced back to the grid for another go, and when the race re-stearted it was again Jones who shot to an early lead.

Falzon settled into second position ahead of Hampton and Henry ‰ÛÒ both riders pushing for second as the gap to Jones extended to 1.249 seconds after two laps.

That gap was nearly three seconds through lap four, as Hampton tried several times to make a pass on Falzon to no avail.

Jones continued to push the limits and was the only rider who clocked sub 55 second laps in the race ‰ÛÒ achieving the feat lap after lap after lap.

On lap nine Hampton passed Falzon into second, and shortly after Henry did the same before the unthinkable happened.

Falzon came off on lap 11 at turn three which effectively handed Jones the outright title ‰ÛÒ the Cube Racing Team rider simply needing to finish the second part of the race to claim top honours.

There was an air of excitement when the racing resumed ‰ÛÒ as Jones moved into the lead off the line in the four-lap re-race.

The final round of the series now heads to Phillip Island from 2-4 October.