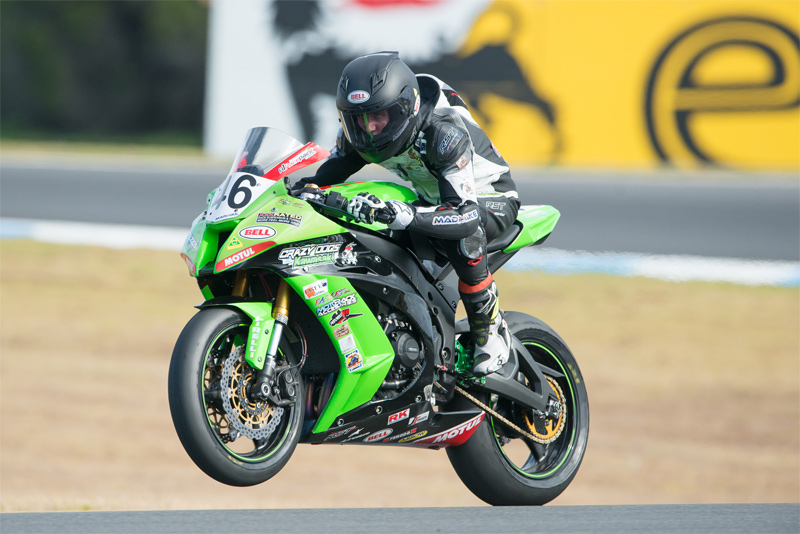 Crazy Dogs Kawasaki rider Mike Jones is preparing to appear on the international stage for the second time in 2014 as part of the Australian Superbike support category at the Australian Motorcycle Grand Prix with the Queenslander hoping to back up from his podium performance at the World Superbike event in February.

The event will be just the second time that Mike has competed at Phillip Island on the Crazy Dogs Kawasaki ZX10 Superbike, with it being just his first season in the elite level category, Jones will be looking to build on his knowledge of the experience gained throughout the season in the Australasian Championship.

‰ÛÏI‰Ûªm really excited about racing at Phillip Island in the National Superbike support category of the MotoGP on my Crazy Dogs Kawasaki ZX10." Jones admitted. "It is an amazing circuit with its fast and flowing corners that I enjoy a lot.

"It will be challenging to adapt to the higher speed after racing on a majority of tight and twisty circuits throughout the year."

The opening round of the World Superbike Championship in February represented Mike‰Ûªs debut in the Superbike category as part of the Australian support class and the Brisbane rider managed to make a strong first impression, recording a podium result in both of the weekend‰Ûªs races, kick-starting his race season and handing him a healthy start to the Phillip Island Championship.

‰ÛÏI‰Ûªm thrilled to be going into the round sitting second in the Phillip Island Championship after having a very successful opening round here at the beginning of the year with a second and third position in the two races." Jones continued. "However, there are no doubts as to the difficulty of the coming races as the competition is going to be fierce with plenty of factory riders."

After having completed numerous events and test days since his debut in February, Jones is keen to display the improvements and developments he has made on the Superbike, with a capacity crowd expected to flock to the Victorian circuit, it will provide a strong opportunity to expose personal growth in the category, and deliver his sponsors to an International audience.

‰ÛÏIt will be a good personal test to see the improvements made to both the bike‰Ûªs handling and my riding abilities since the beginning of the year. I look forward to doing my best and hope for a successful weekend showcasing myself and my sponsors at this level,‰Û