Defending champion Husqvarna has welcomed 2015 Australian Enduro-X Champion Mike Brown and Kyle Redmond back into the country on the eve of this weekend‰Ûªs Clipsal 500.

The two Americans will fly the Husqvarna flag this weekend at Australia‰Ûªs highest-profile enduro-x event, which runs in conjunction with the V8 Supercar curtain-raiser, the Clipsal 500.

After casting a dominating shadow over last year‰Ûªs event, Victoria‰Ûªs defending Clipsal 500 Super Enduro-X Champion Mitcham Harper is sadly benched with a leg infection, and will take no part.

However, the Husqvarna Off-Road Racing Team has a strong relationship with Tennessee enduro-x specialist Mike Brown, who has represented the team on three prior occasions including the 2014 A4DE where he finished on the E1 podium, and in 2015, when he gave the team an Aussie Enduro-X championship.

‰ÛÏIt‰Ûªs a fast enduro-cross track, but it‰Ûªs not much different to the ones we had here, like the last one in Melbourne," Brown said.

"It‰Ûªll be fun, especially if they‰Ûªre having the motocross guys here, they‰Ûªll be good at the jumps. It‰Ûªs going to be a good race because the enduro-cross part‰Ûªs not super technical. I‰Ûªve been doing some arenacrosses at home and last week I was in Argentina doing a big beach race down there. It‰Ûªs nice to be back, heck yeah, I‰Ûªm super excited. I was telling Toby a while back I‰Ûªd like to live here. The culture is not a big change and everybody seems nice and friendly, a lot better than America for sure, for me.‰Û 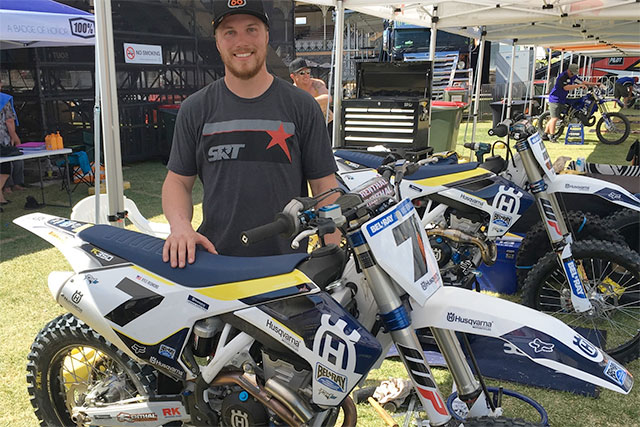 ‰ÛÏIt‰Ûªs good fun, it‰Ûªs a little bit more of a supercrossy-style than what we do back home," Redmond said. "A lot faster but a lot of fun and the wood pile turn is super hard ‰ÛÒ it‰Ûªs going to make it exciting, a lot of crashing there! It‰Ûªs a pretty big event going on here, so it‰Ûªs going to be pretty cool to stay here for the week and check out all the other racing. I‰Ûªve always enjoyed Australia when I‰Ûªve been here in the past, so I‰Ûªm sure the fun is just beginning. I‰Ûªm feeling good and ready to go battle. I haven‰Ûªt been on my Husky very long, but honestly, I feel comfortable on it right away. So, all good.‰Û