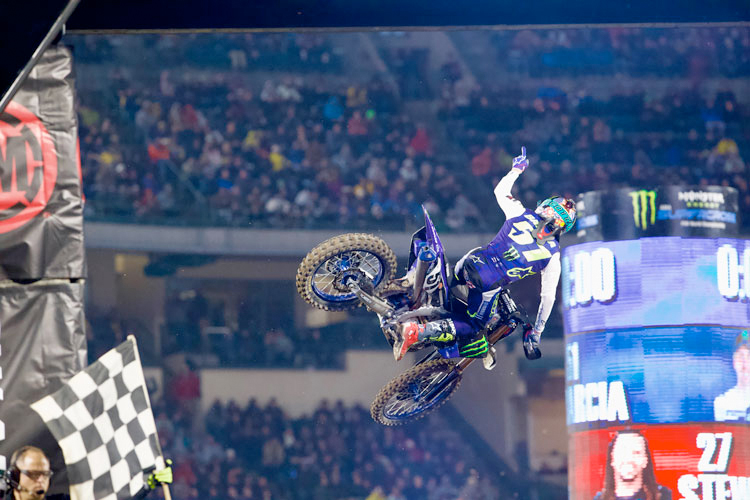 Justin Barcia takes his first 450 SX win in six years and also gave Yamaha their first 450 main event win since 2012
They came, it rained, and Barcia left with a smile.

Actually, it was not only Barcia who would have left the opening round of the 2019 Monster Energy Supercross Championship with a smile, but everyone at Yamaha America after the bLU cRU dominated a very exciting season opener.

A1 had it all this year right from the start. At one point in the second 450 A qualifying session the top 15 riders were separated by less than a second and even by the time the flag flew on qualifying the top 15 were separated by just a fraction over one second with both Plessinger and Reed also not much further off the pace in 16th and 17!

And if anyone stands up and says they picked the top five qualifiers in the 450 class in order, stand up and call bullshit, as no-one was expecting those results. Not that Blake Baggett and Dean Wilson are not great riders, they certainly are, but if you had them as 1 and 2, then followed by Malcolm Stewart and Justin Brayton can you give me a call and also let me know this week's lotto numbers!

I am not sure if it was more of a shock to see them four up top, or Eli Tomac and Jason Anderson back in 5th and 6th, Ken Roczen in 8th was not such a shock as he can be down the list in qualifying at times, but the top six in that order was probably not to be expected.

And for the record, the eventual main event winner qualified 9th fastest! We have heard the words STACKED FIELD used before, and we know it is only A1 which can throw out weird results, especially with a bit of rain about, but this field as it stands right now looks pretty dam even. Just sucks that there is no Zach Osborne, Weston Peick and Broc Tickle on the line if there was we could have had the top 20 close to being on the same second in qualifying! 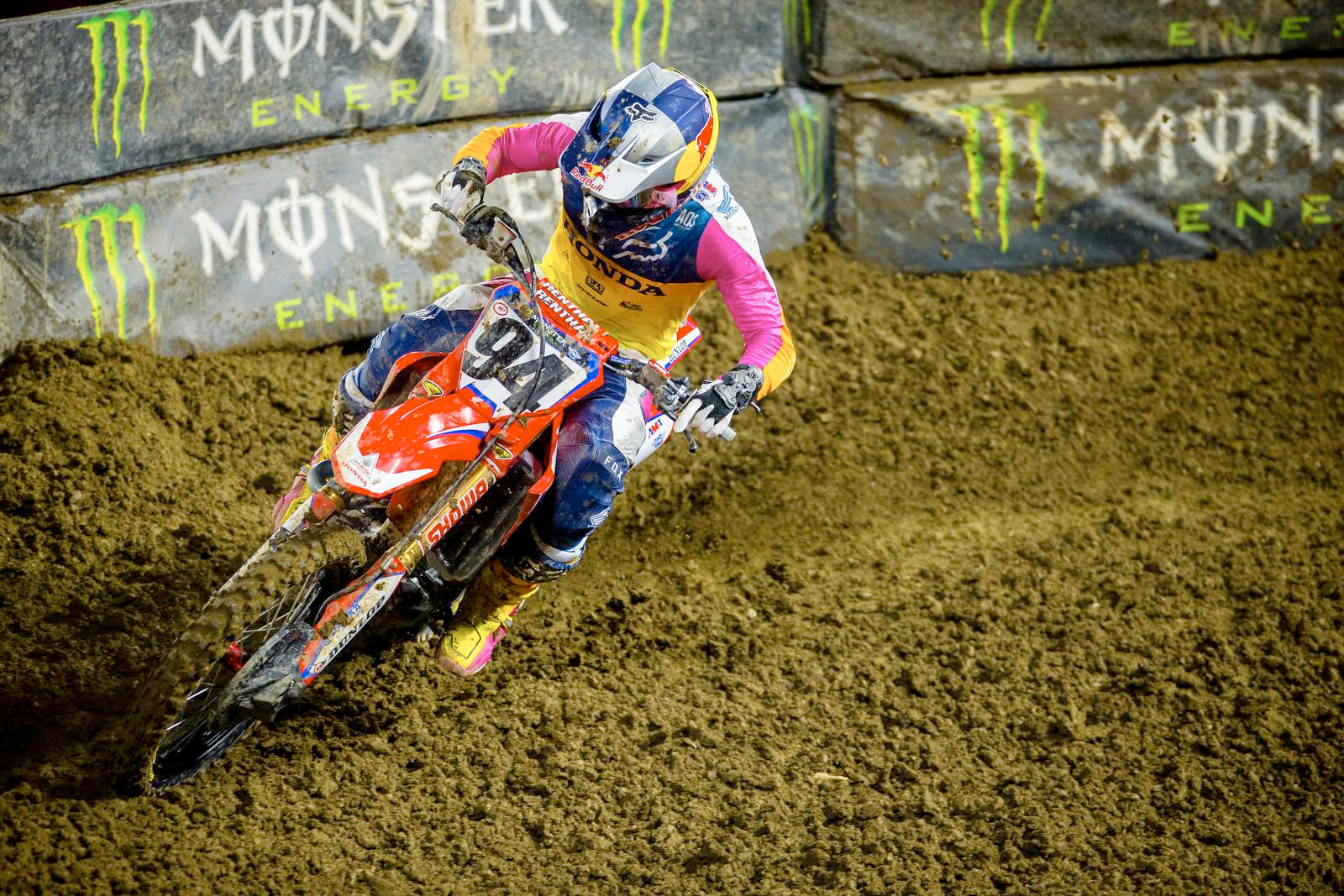 Ken Roczen was rock solid in second at A1
WhileBlake Baggett was able to back up his qualifying result in his heat, things went sideways for him in the main, and much the same for Brayton. While both Stewart and even more so Wilson backed up their qualifying speed with a great opening 15 laps in the main, with Wilson leading Stewart for nearly three-quarters of the race before small mistakes seen them both drop from the podium as Barcia pounced for the win. Both his and Yamaha's first win in six years in the 450 class!

It was actually James Stewart who last one for Yamaha back in 2012 at Daytona aboard a JGR Yamaha.

Behind Barcia, Ken Roczen rode a calculated, smart race, as did Eli Tomac who worked his way from mid-pack to land on the podium.

Barcia's ride was certainly the ride of the night, but picking the second best ride of the night was a tight one, Wilson coming back from all his injuries leading the race and finishing 4th was massive, however Cooper Webb has also had an average run over the past two years and things looked like they would continue that way after he qualified down the order, made it in to the main event after finishing 9th in his heat then crashed in the first turn. Really at that point in time things would have been pretty low for the new Factory KTM racer.

But he picked his bike up, rounded his first lap at least 20 seconds behind the race leader and was dead last. 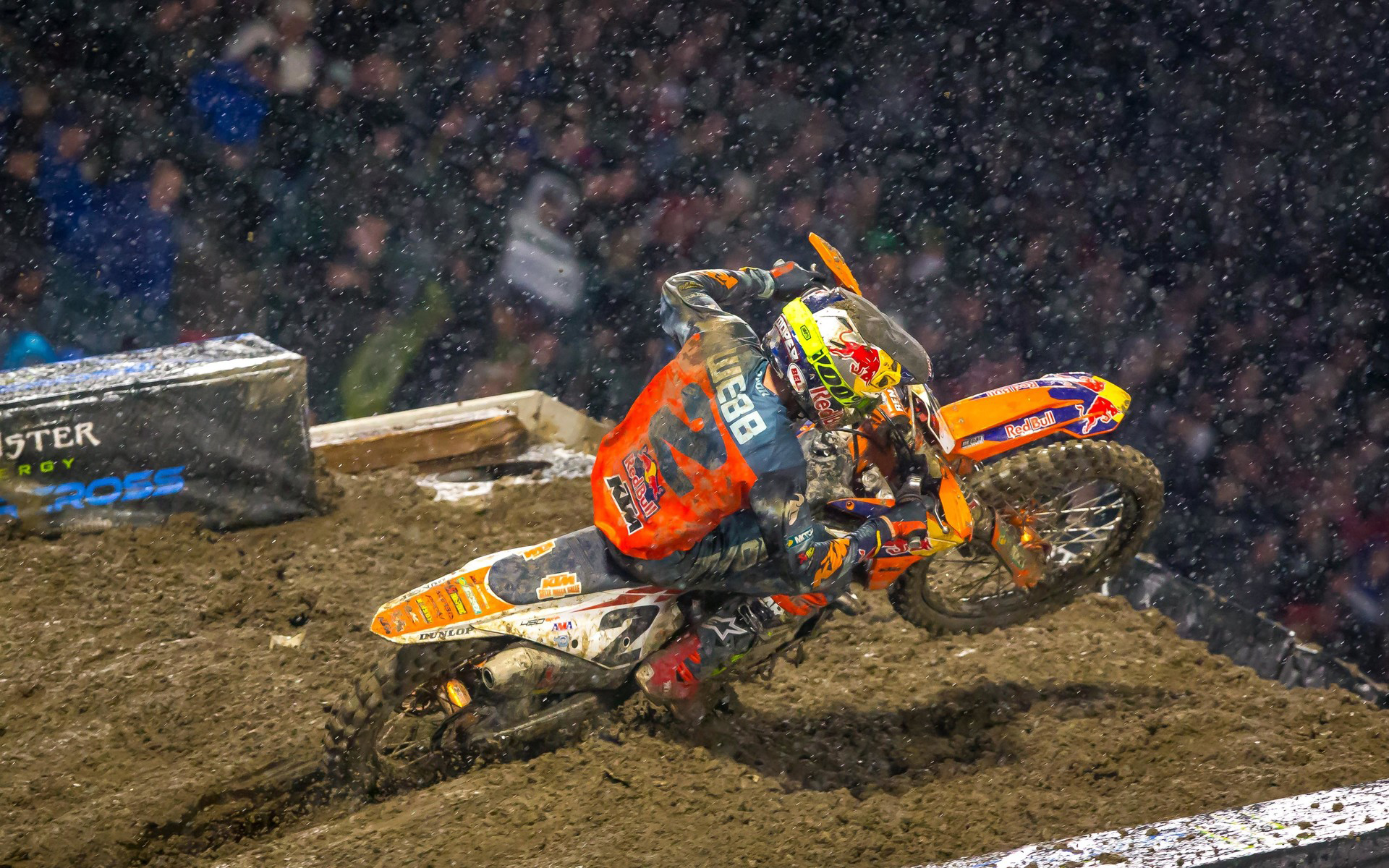 While he did not win the race, Webb's run from dead last to 5th was up there with the best rides of the night at A1
Webb put on a charge for the ages and slashed his way through the field. At race end, he crossed the finish line just 17 seconds behind the race lead in 5th place. Think about that for a second; he was closer to the race leader at the end of 20 minutes plus one lap than he was after crashing in the first turn and needing to pass riders every lap of the race!.

For our Aussie man Chad Reed, while his ride through the field was not as impressive as Webb's, it was still very impressive in its own right.

Reed got hung up on Webb's bike in the first turn crash and rounded the end of the first official lap down in 15th place. Putting his experience to use in his 18th A1 start, he worked his way through the field with Webb until they hit the top ten, which was the point Webb put the afterburners on and raced away to 5th, while Reed held the pace he was running and finished the night out in an excellent 9th. 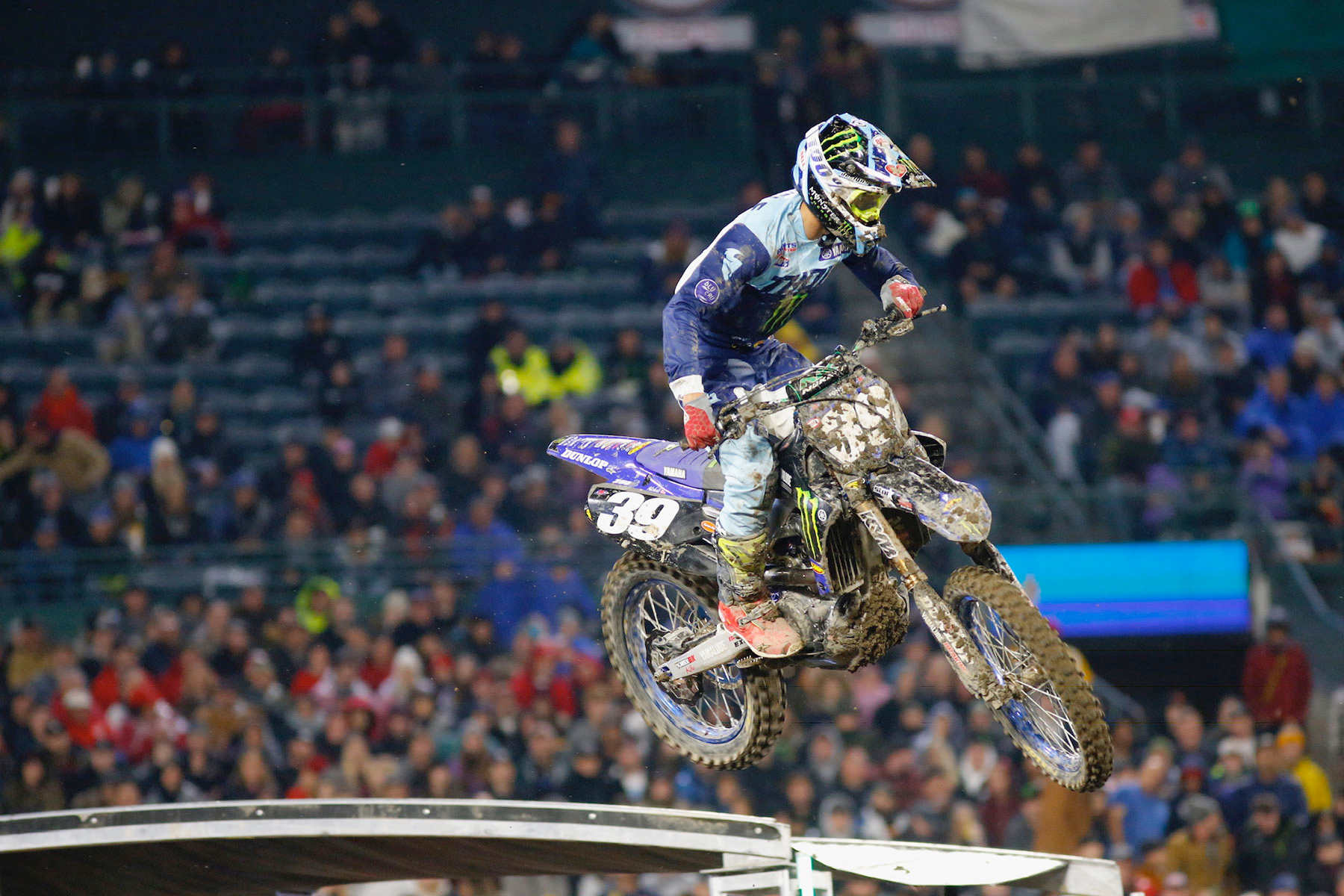 Colt Nichols broke through for his first SX win in the 250 West class and helped to give Yamaha a pefect start to the 2019 SX Championship
While the 450 class was full of excitement, the 250 class was a little more subdued, with Colt Nichols running away for a wire to wire win, his maiden SX win ahead of Yamaha team-mate Dylan Ferrandis and KTM's Shane Mcelrath.

The excitement for the night in the West class came from Adam Cianciarula and RJ Hampshire with a late race on track melee resulting in Cianciarulo on the deck.

For Aussie hopefull Tomas Ravenhorst, it was an eventful night. After easily qualifying for the night who, Ravenhorst put in a good ride in his heat to finish 12th and giving himself a good gate pick for the LCQ.

He got a good jump in the LCQ and was sitting in 4th when someone landed on his rear wheel off a jump, leaving him on the deck and ending any chances of making the main event. 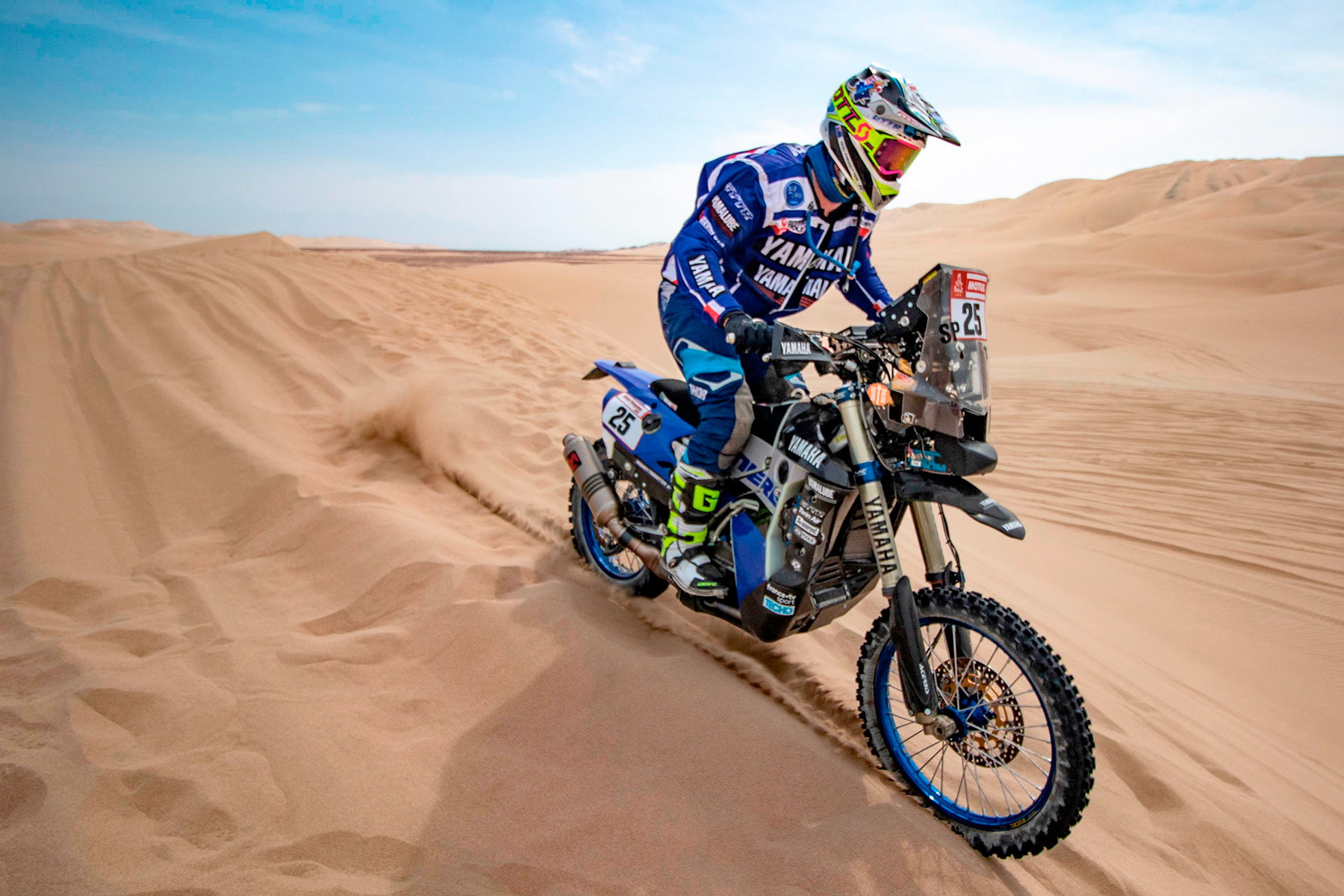 Dakar has started
While all the focus was on A1, the great race kicked off early this week, we won't get deep into the Dakar as we are only a couple of days in, but all four of the Aussie riders have made it through the opening two days, with both Toby Price and Rodney Faggotter posting good results, while both Ben Young and James Alistair Ferguson have completed the opening stages.

We will check back mid next week and have a good look at how the opening week has gone for both our Australian riders and top contenders in this year's race. 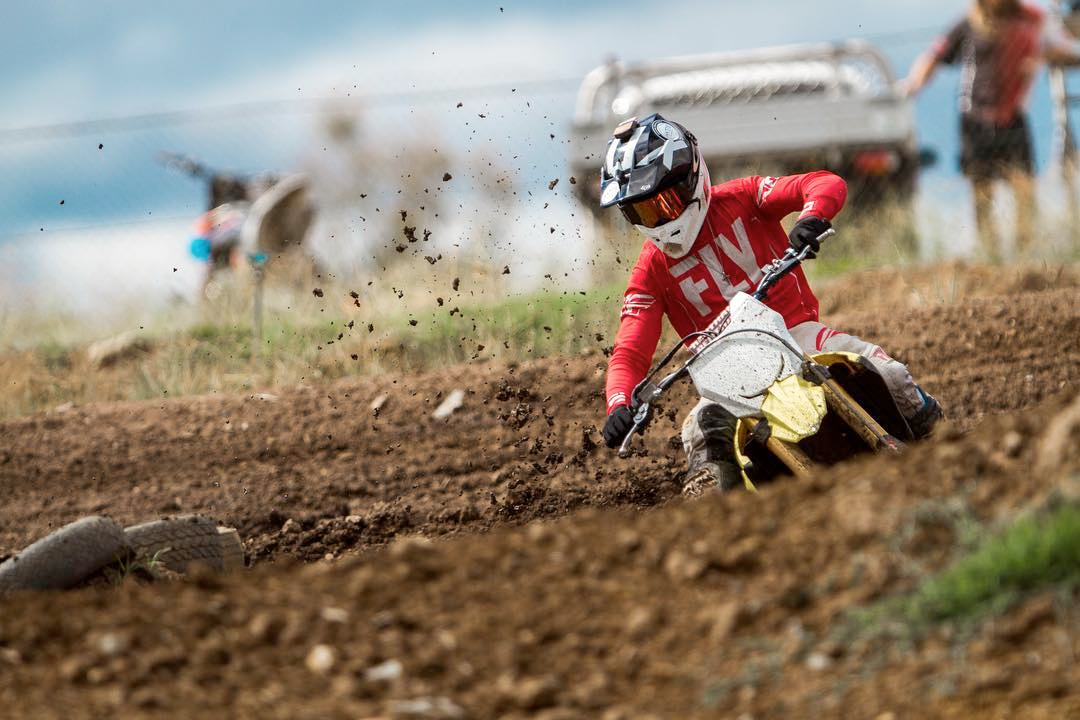 KSF have chosen their top 12 riders in the race to join the team in 2019
Last week we gave a bit of a rundown on where the Factory 450 teams here in Australia are at concerning rider lineups for 2019.

The KSF Suzuki team are taking things in a different direction for 2019 and put a host of riders through their paces in Canberra over the weekend in a bid to find a team rider for the upcoming MX Nationals season.

The top 12 will now take part in a range of physical tests both on and off the bike in the coming weeks as the field is narrowed down.

Head to the KSF Racing Facebook page by clicking here to follow the action, with the team currently producing a film that will document the whole experience from start to finish.

One of the other things we touched on last week was the possibility of Todd Waters lining up for the DPH team, that certainly looks to be the case with the former World Championship racer and Australian Motocross Championship contender set to line up aboard a DPH Husqvarna at the Coffs Harbour StadiumX this Saturday. 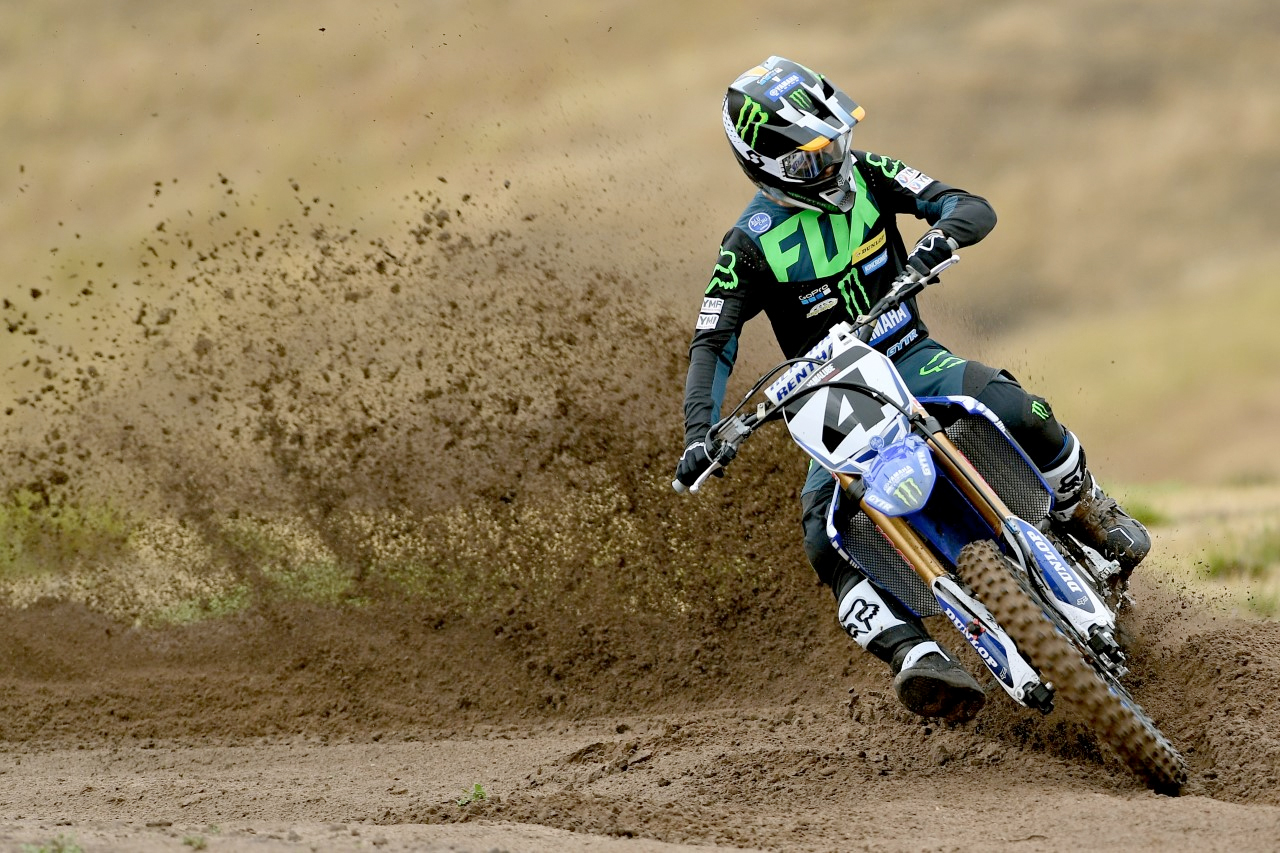 Luke Clout will be one of many top line pro racers on the line at Coffs Harbour and will go up against Husqvarna mounted Todd Waters
Speaking of the Coffs Harbour StadiumX, it is a race that has set a benchmark for stand-alone state-based races over recent years and now with the backing of Yamaha has become one of the must-do races in the nation, which was shown by how quickly entries filled up.

Some big names are lining up as well, including the above mentioned Todd Waters, who will be joined on the line by current Australian SX2 champion Jay Wilson, newly signed CDR Yamaha 450 racer Luke Clout and Rhys Budd to name a few.

The first Australian dirt bike national champion will be crowned this weekend when the 2019 Australian senior solo speedway championships come to a conclusion on Saturday night in Kurri Kurri, New South Wales. Max Fricke is currently in the box seat and will be hard to knock off at the head of the points table with 4 rounds down and 1 to go.

Again we will have a deeper look at how the championship unfolded once it is all done and dusted next week.

Product Of The Week. 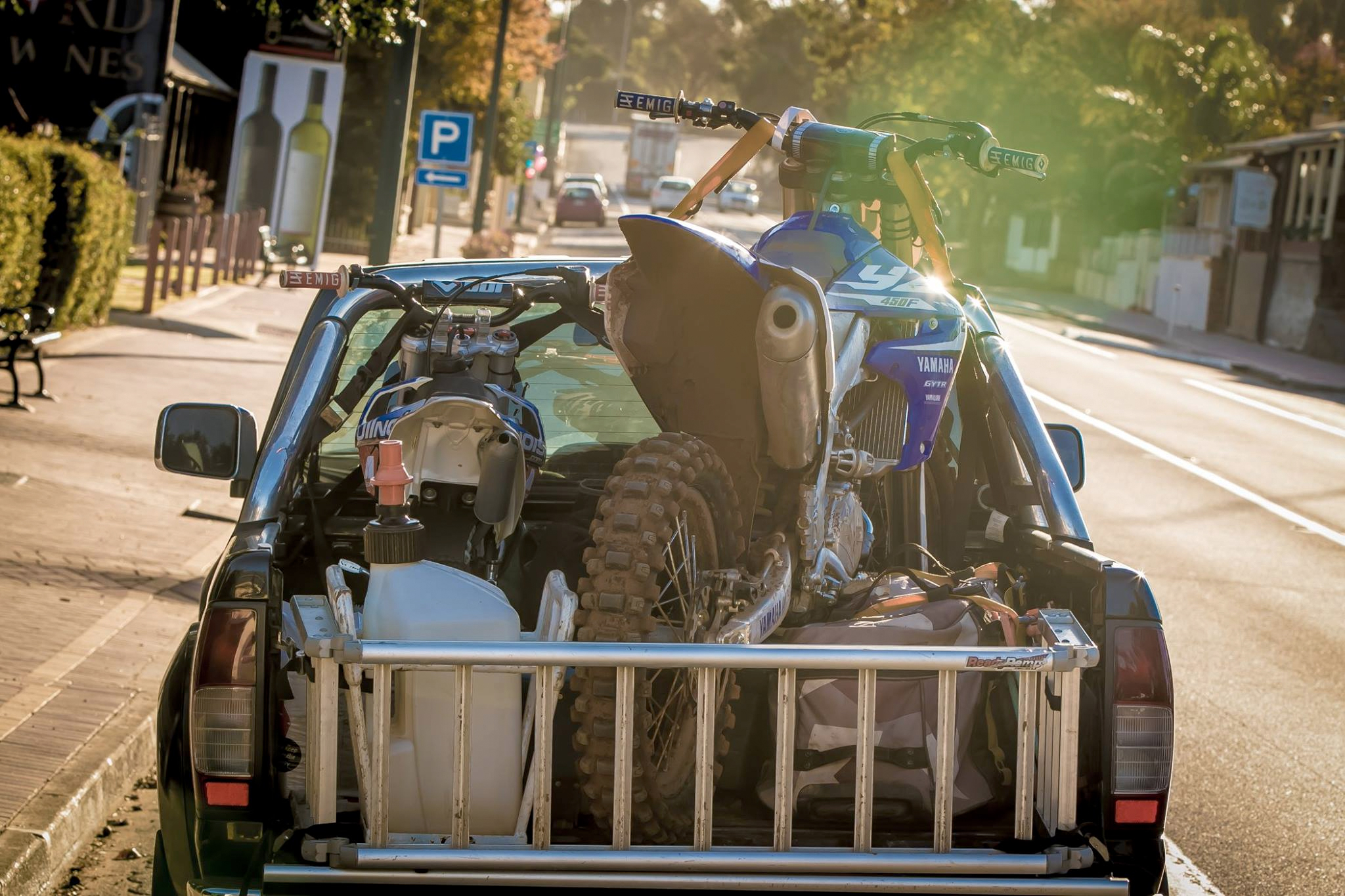 Our Ready Ramp has been through a lot over the past five years, but is still going strong and being used on a weekly basis!
READY RAMP

This week we have thrown the product of the week to the READY RAMP, a product that we have relied on ourselves for nearly five years!

Check out our review from back in 2014, we are still using the exact same ramp to this day and will be using it when we load up to head over to Victoria for the Shipwreck two-day event next weekend.

Obviously the most significant advantage to the ready ramp, is its ability to double as a ramp that is wide enough and strong enough to use to load any bike up, but then also to double up and act as a tailgate, while your utes own tailgate is laid flat, giving some much needed extra tray space when travelling.

We have had the pleasure of using and testing some great products over the years and the READY RAMP rates up there as one of the best and indeed most useful and long last products we have used. 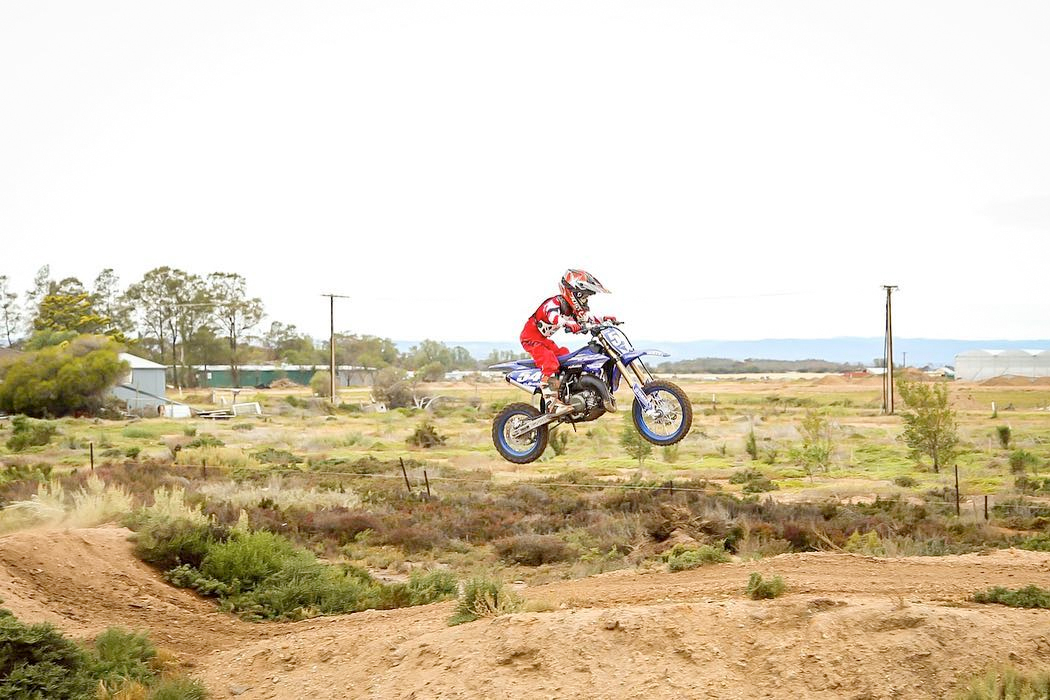 Just a quick gearbox oil change, which is due, and a fresh set of tyres to go on, along with the standard fresh air filter and we are all set for an early ride on Saturday before kicking back and getting ourselves set for another Sunday in front of the TV watching Supercross.

While myself and Jay will be having a bit of a quite one, Tim Vare has a big weekend planned at Ride Park in Victoria, with a Vortex ECU and Gaz will be surfing! 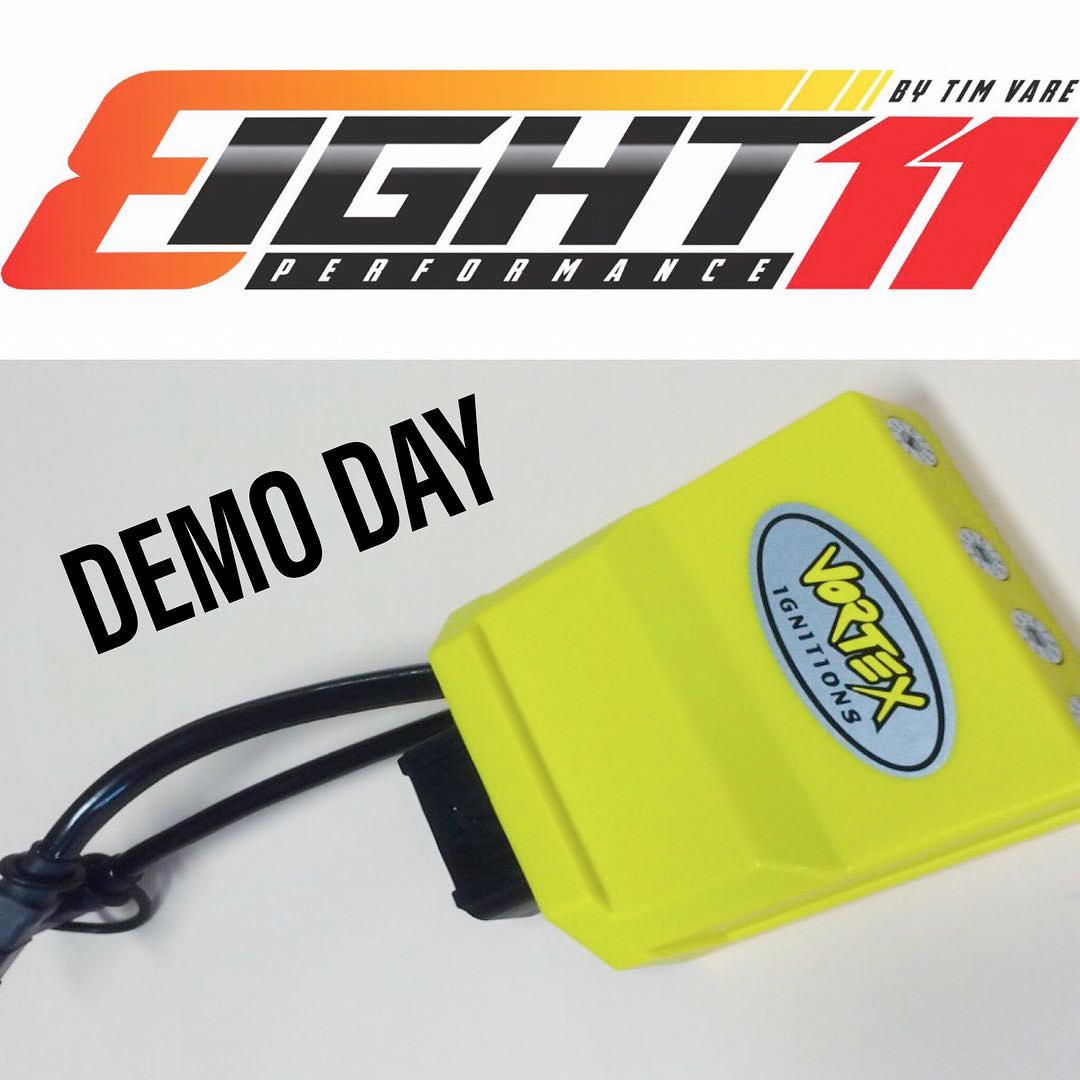 Tim Vare will be holding a VORTEX come and try day at Ride Park Vic this weekend, hit him up and get involved.
It is a great opportunity for anyone thinking of some performance upgrades coming into the 2019 season, here is your chance to try a Vortex ECU with the ability to test some custom maps. We are able to make mapping changes to suit your riding style and bike while at the track testing with you.

If you want to spice up your 250 and chase some bottom end hit or looking for more over rev. If your 450 is a bit wild and your looking to smooth out the power making it easier to ride or take out some engine brake to help settle your chassis it‰Ûªs all achievable via these ECU‰Ûªs

Vortex ECU‰Ûªs also improve starting, reduce flame out and stalling, a great benefit for enduro/off-road bikes that will be available to test also.

We will have a number of ECU‰Ûªs to test including 19 models Husqvarna, Honda, Ktm, Yamaha, Suzuki, Kawasaki.

To confirm a time slot for your attendance and bike please

Tim will also have ECU‰Ûªs available to purchase on the day.