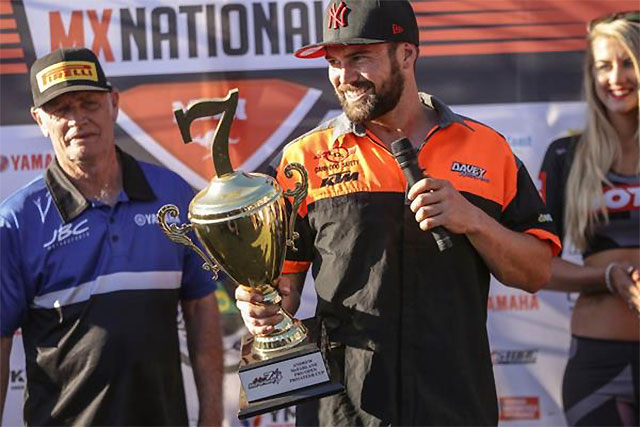 Michael Menchi and Jayden Rykers were awarded with two of the most prestigious Motul MX Nationals awards last Sunday, with Menchi securing the MX1 Privateer Andrew McFarlane award, and Rykers landing his name on the MX2 Jono Porter trophy.

After a ten round long season, both Menchi and Rykers wrapped up their 2016 Motul MX Nationals campaigns at Coolum on the weekend with plenty of reason to celebrate ‰ÛÒ both being recognized as this year‰Ûªs Privateer shining stars.

For Menchi, taking the Andrew McFarlane Privateer Award on Sunday was a great honor, and something he never imagined when he returned to racing at the beginning of the season.

‰ÛÏIt's a huge honor to take home the Andrew McFarlane Privateer Award. At the start of the year I certainly didn't think I'd be anywhere near the top of the privateer scales let alone inside the top ten,‰Û 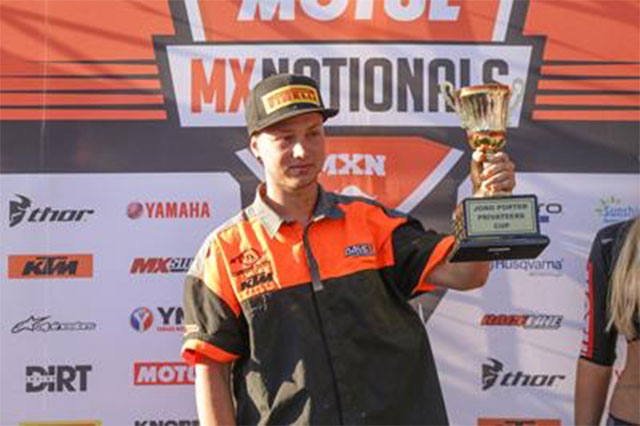 Jayden Rykers with the Jono Porter Cup. Credit: Supplied MXN Images
For Rykers, 2016 was the KTM rider‰Ûªs first ever season in the talent packed Motul MX2 class, and after finishing in an impressive fourth in the championship, says that he‰Ûªs thrilled to see his name added to the prized Jono Porter Privateer trophy

‰ÛÏIt's an honour to have my name on this prestigious award, also to be joining some other amazing athletes who have won in the past and having my name on the trophy itself, which is named after the well-known Jono Porter has been humbling. It‰Ûªs is a credit to my family, friends and team backing me through the 2016 motocross season,‰Û