Men on a Misano mission – Rookies Cup on the Adriatic 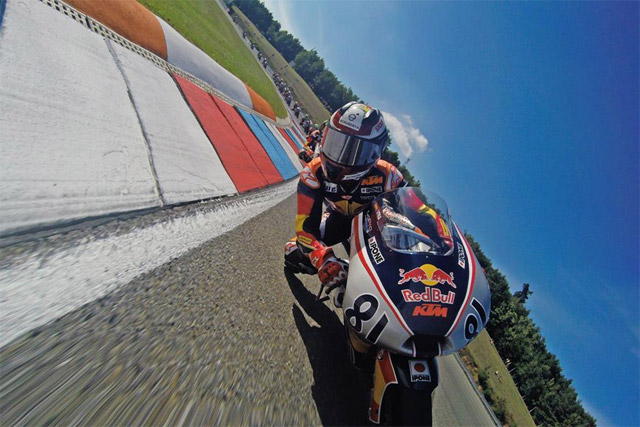 It is all getting very tense in the Red Bull MotoGP Rookies Cup. Just three races remain in the 10th season, the battle for this year‰Ûªs crown is fierce and already those aiming to be included in the 2017 Cup have signed up online with the applications about to close.

While ex Rookies Johann Zarco and Brad Binder continue to lead the Moto2 and Moto3 World Title chases those set to follow them still have the battle over the 2016 Cup.

It is Ayumu Sasaki who leads as he has done since Race 2 of the season when he left Jerez tied on points with Aleix Viu. The Japanese and Spanish 15-year-olds are still at the top of the table though Viu‰Ûªs disappointing wet second weekend in Assen cost him the share of the lead and he has yet to get it back.

Viu has scored slightly more points than Sasaki in the last six races but it has not been enough to redress the Assen damage so the Japanese is still 26 ahead. There are 75 points to be won though so things are far from over and in fact there are four riders very much in the Cup hunt.

Man-on-form is Marc Garcia who scored the perfect Brno double and in fact has won three of the last four races. The 16-year-old Spaniard is 37 points adrift of Sasaki having had a disastrous opening to the year when he didn‰Ûªt even start Race 1 in Jerez following a sighting lap crash.

Garcia says that Misano and Aragon are favourite tracks and no one is counting him out for the title. Certainly not fellow Spaniard RaÌ¼l FernÌÁndez as the 15-year-old has not finished in front of him since the Sachsenring and is now just 5 points in front.

Last year FernÌÁndez was super strong in these last three races, taking two second places and finishing ahead of Sasaki in two out of three starts. He will need to do even better this year if he is to overcome Sasaki‰Ûªs 32 point advantage and has to regain his double Assen victory dominance.

None of the lead four can expect the others to make mistakes, they just aren‰Ûªt doing that. There will be others in the hunt as well of course, those happier to take big risks, like fifth placed Kaito Toba who can‰Ûªt take the title but can add to the victory score started with Sachsenring 2.

Rory Skinner has yet to claim that top step but Misano was a breakthrough for the 14-year-old Scot last season and he scored two thirds from pole in Aragon. Unfortunately Makar Yurchenko will miss Misano because of a broken ankle suffered when he crashed on spilt oil at a non Cup event. So the 18-year-old Russian may well lose his seventh place in the points table.

The man set to take it is Rufino Florido and the 16-year-old Spaniard really is the man who has shown the most verve and ability yet without winning a race. Third in Jerez 2, fourth in Race 2 at the Red Bull Ring, he looks capable but so far it has escaped him.