Melero wins the first World Championship round in Basel

For the second time in the history of NIGHT of the JUMPs, the season opener of the World Championships began in Switzerland. 10 riders from six nations battled on Saturday night in the St. Jakobshalle in the picturesque city of Basel for the first points of the FIM Freestyle MX World Championship in 2017.

After the winter break, the best Freestyle MX riders in the world opened with some big new tricks. Pat Bowden (AUS) and David Rinaldo (FRA) let loose in qualification with their Double Grab Flips. While Petr Pilat (CZE), Mat Rebeaud (SUI) and Maikel Melero (ESP) unleashed the Flair in the qualifier. 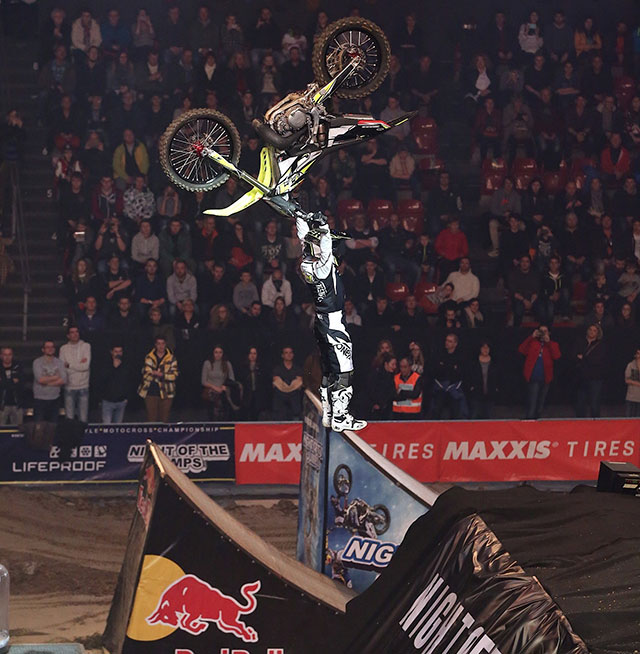 Maikel Melero took the win at round 1
Melero and Rinaldo both showed their Lazy Boy Flips. With Marc Pinyol (ESP) and Libor Podmol (CZE) spinning body varials with their version of the California Roll. In the final however, it would be Brice Izzo, Pat Bowden, Libor Podmol, David Rinaldo, Petr Pilat and Maikel Melero.

For Rebeaud, even with the Flair, it wasn‰Ûªt enough to make the final. For Filip, the younger of the two Podmol brothers, his night ended abruptly on only his second trick. Filip crashed his Surfer take-off Tsunami Flip but was lucky to remain uninjured. For Marc Pinyol his body varial also wasn‰Ûªt enough to get him past the preliminary round.

In the Best Whip competition, Pat Bowden, Marc Pinyol, Filip Podmol, Massimo Bianconcini, Leo Fini and Mat Rebeaud starred in the strongest Whip rider field in recent years. The Swiss crowd pushed their national hero to even bigger whips. With this, Mat snuck his way into the final against the youngest Podmol. Both with huge whips, ultimately the judges decided the Swiss to be in front to the delight of the 8,000 fans in the arena. A small consolation for Mat after missing a finals berth in the Freestyle MX contest. 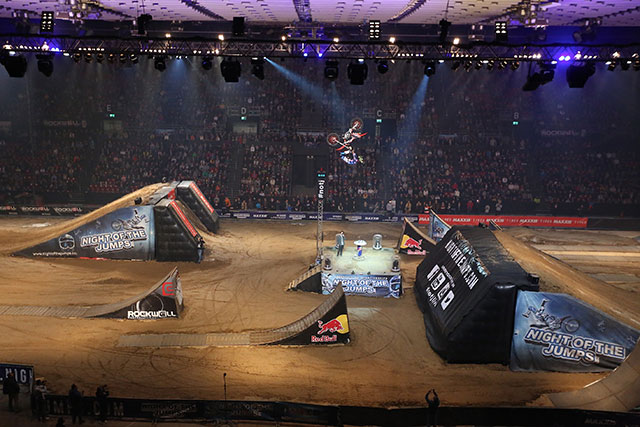 Petr Pilat took out the runner-up spot
In the first Maxxis Highest Air contest, it was a battle between Massimo Bianconcini, Brice Izzo and Pat Bowden. Bowden, who won his first ever Highest Air attempt in China last year was unable to replicate his form in Basel. He didn‰Ûªt get beyond the initial height. Also, for Brice, he was unable to get past the Italian stalwart after jumping over 7.10 metres but unable to clear the 7.50 height which Massimo did in good fashion to take the first win of the season.

The Final opened with Brice Izzo showing a solid run, but he had to vacate his seat immediately after Pat Bowden‰Ûªs run. The Australian showed his best NIGHT of the JUMPs performance to date with tricks like his Ruler Flip, Seat Grab Indy Flip over the super kicker and Double Grab Backflip.

Petr Pilat also showed one of his best performances of his career with a huge Tsunami Flip from the tall rider, Shaolin Flip, TP, Candybar take-off Flip to Candy landing, plus utilising the quarter pipe for a Flair in the Double Up. With the extra extension it was enough to surpass Bowden. 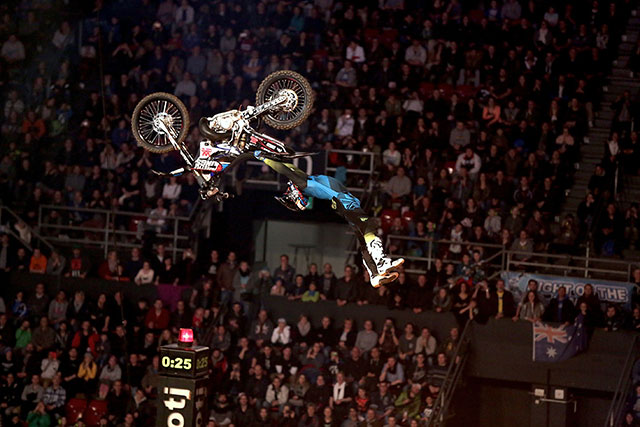 Aussie Pat Bowden landed on the podium with third.
David Rinaldo and Libor Podmol both had nightmare runs. Both showed unbelievable runs with all of their biggest tricks. In the Double-Up however, both riders faded out. First, the Frenchman couldn‰Ûªt pull his Double Grab Backflip which he had planned. Followed by the Czech ninja who crashed out on his California Roll, both being relegated to 5th and 6th.

It was then time for the reigning World Champion, who had already won qualification. In the finals, he again showed why he is a cut above the rest. Melero brought tricks like the Seat Grab Flip, Ruler Flip, California Roll and the Nac-Nac Flair. The judges rewarded him with 431 points, putting the Spaniard firmly in the lead over Pilat and Bowden.

With his latest triumph, the reigning World Champion has taken the lead again in the 2017 World Championship series. This can change very quickly however with the next two rounds of competition next weekend, when NIGHT of the JUMPs returns to Berlin (4th/5th February at the Mercedes Benz Arena).

Fans worldwide will also be able to watch the NIGHT of the JUMPs World Tour live by visiting www.nightofthejumps.com/live this year. All events will be streamed live. For the Swiss fans, they can look forward to NIGHT of the JUMPs returning to St. Jakobshalle on 27th January, 2018.