Melero the only rider to beat the incredible comeback of Bizouard

The final round of the NIGHT of the JUMPs season wrapped up in spectacular fashion at the Ergo Arena, Gdansk on Saturday night.

?In 2011 the longest running Freestyle MX sport series made its premiere in Gdansk. In 2016, it was the first time the season finale would be settled in Poland. All 10 athletes who competed at the 11th round of the World Championships wanted to bring their biggest tricks and show what they will have in store for the new season next year.

With the new World Champion already being crowned at the last round in Shenzhen, China, with Maikel Melero (ESP) and Silver being awarded to Rob Adelberg (AUS), the focus was on a two-man battle between Remi Bizouard (FRA) and Petr Pilat (CZE) for the Bronze Medal. 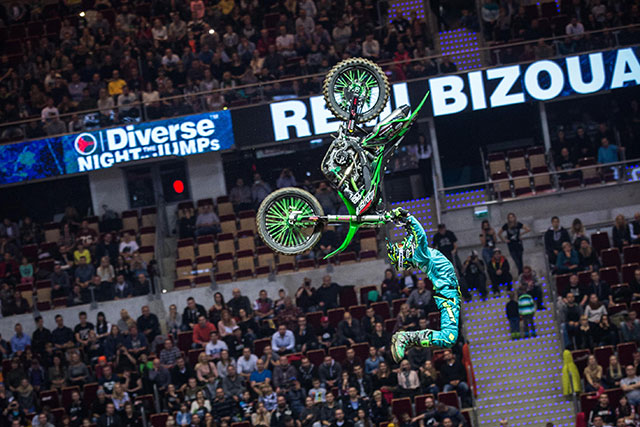 Remi Bizouar took third place in the championship with second at Gdansk.
There was only one point separating the two riders before the season finale. In the qualifying, both of them showed their biggest tricks to secure a place in the finals. Brice Izzo (FRA), Leonardo Fini (ITA), Adelberg and Melero joined them in the final round. Newcomer Ryan Brown (AUS) showed great style but unfortunately had some bike problems and washed out on the landing of his flair to finish in a close seventh position. Six riders entered the LifeProof Best Whip contest. Maikel Melero and the local champion Marcin Lukaszczyk (POL) whipped into the finals where the local Pole finally won with rapturous applause from the 10,000 spectators.

In the final, Brice Izzo rode solidly and moved past Leonardo Fini, who crashed on his California Roll on the last jump of his run. Rob Adelberg also had a small mistake when he bobbled on the Cliffhanger Flip. He was able to regain composure and finish his run with the Cordova Egg Roll and California Roll to No Hand Lander, some of the most technical tricks of the night. It just wasn‰Ûªt enough for the day‰Ûªs podium after Petr Pilat brought his first ever Flair to competition in the final to finish in 3rd place. 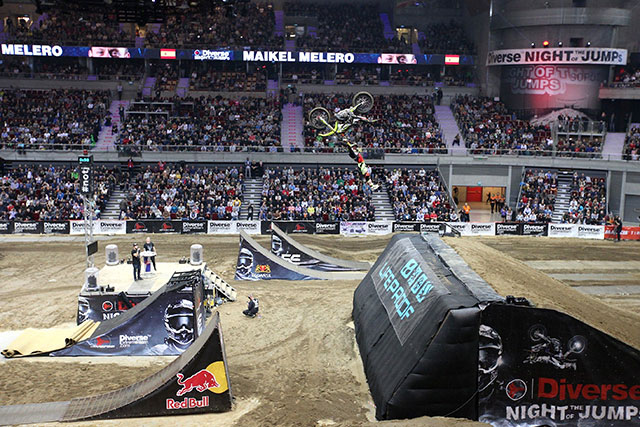 Maikel Melero took the win in Gdansk
The biggest surprise of the evening went to Remi Bizouard. The three-time World Champion suffered a broken hand weeks earlier and battled through four World Championship rounds picking up only minor placings while he was only able to jump and barely perform any tricks. But with a few more weeks of recovery, he surprised everybody by showing his biggest tricks including the Egg Roll, Ruler Flip, Cliffhanger Flip and Volt in the Double Up. The Frenchman secured the third place overall for the World Championship rankings and pushed Petr Pilat back to the unenviable position of 4th overall in the tightest of match-ups.

But it would just not be enough for Bizouard to take the win on the night. Maikel Melero was able to outshine the French rider with his Flair, Lazyboy Flip and Melero Roll to take out his 10th win from 11 events in the 2016 season. With 200 points on his World Championship account, he collected the maximum points on offer for the season. No other rider has dominated so much in the 10 year history of the FIM World Championships 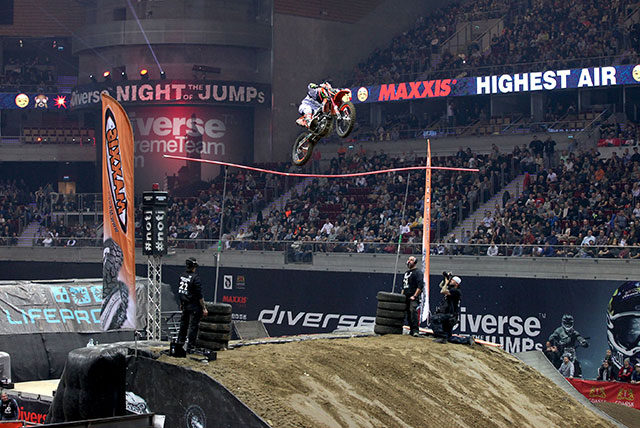 Massimo Bianconcini took the win in the Maxxis Highest-Air
The NIGHT of the JUMPs crew and riders will take a short Winter break and return for a new season which starts on the 28th of January, 2017, with the start of the World Championship in Basel, followed by the double event in Berlin (4/5th February, 2017).