Melero Extends World Championship Lead On Day One In China 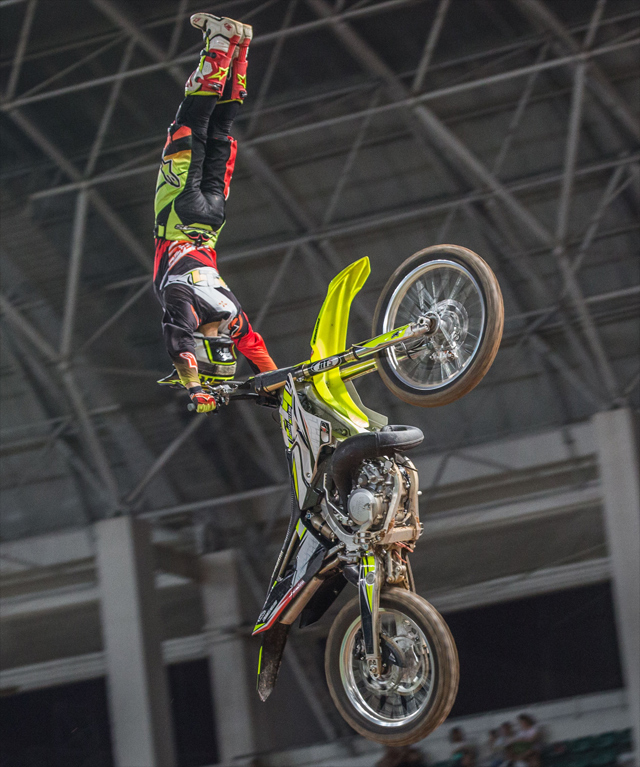 For the third year in a row, Shenzhen has hosted NIGHT of the JUMPs with two rounds in 2016.

The big weekend of FMX action began with the 9th round of the FIM Freestyle MX World Championships in the city‰Ûªs football stadium, the Shenzhen Sports Centre.

The focus of everyone‰Ûªs attention was the duel between the reigning two-time World Champion, Maikel Melero (ESP) and the man hunting him down, Rob Adelberg (AUS). The Spaniard is in a position to defend his World Title in China, however he will need to be in front of Adelberg on both days if he‰Ûªs to achieve his dream of 3 World Championships in a row.

However, problems arose immediately in the qualifying round when a blustery and inconsistent wind set in. Thus, they opted for ‰Û÷safe‰Ûª runs to advance through to the finals, even without a body varial at this stage.

On the other hand, the second Spanish rider making his appearance in China for the first time, Marc Pinyol went on the attack. He was the only rider to throw body varials into his qualification run including the California Roll and his signature trick, the Inside Roll.

Pinyol was caught up on the handlebars before landing but by the skin of his teeth, he was able to save the trick on landing and the judges rewarded his risk with a position into the Top 6 final. Pinyol was able to make it through to the final against the other riders David Rinaldo (FRA), Petr Pilat (CZE) and Pat Bowden (AUS)

The LifeProof Best Whip contest followed with a battle between Pinyol and Bowden in the final head to head match-up. Both riders brought the 20,000 spectators to their feet with some of the biggest whips we‰Ûªve seen at Night of the Jumps. In the end, Bowden would take the win which brought his total to 6 LifeProof trophies for the season. 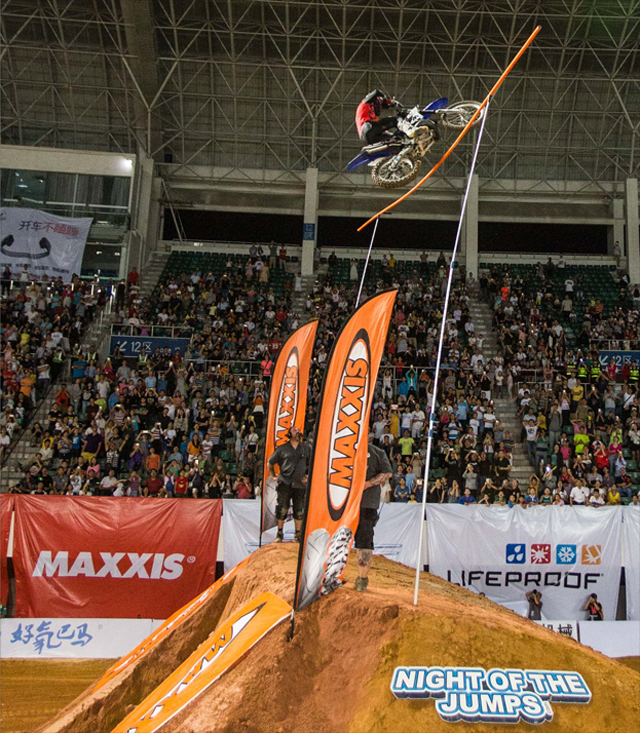 Bowden pushed the veteran and multiple Highest Air champion Massimo Bianconcini closer and closer to the NIGHT of the JUMPs World Record height of 11.50 metres which Massimo had set previously, however they just didn‰Ûªt make it, both only clearing the height of 10.50 metres. Unfortunately for Massimo, on a previous attempt he was unsuccessful and on the countback, Bowden won the Maxxis Trophy on Day 1 as well.

The Freestyle MX Final round was always going to be palpable, especially with Pinyol making his first appearance in a NIGHT of the JUMPs final. He showed his steel with more confidence from his first round bringing the California Roll and Inside Roll again but also becoming the only rider to utilise the Quarter Pipe in Shenzhen with the Egg Roll.

Pinyol then sat for the first time on the Hot Seat and remained until Rob Adelberg would challenge him with his own California Roll but upping the ante with a No Hand Landing without a ‰Û÷bar check‰Ûª and a clean run. Adelberg wasn‰Ûªt able to hold onto his position with Melero performing his biggest point scoring tricks in the final including the Lazyboy Flip and California Roll to win his eighth World Championship round of the season.

The finale was unfortunately overshadowed by the crash of David Rinaldo who appeared to jump too high on his Volt body varial to be able to regain control. Rinaldo was taken to the local hospital for treatment and scans.

The overall World Championship title fight could possibly come down to day two in Shenzhen with Melero edging 2 points further in front of Adelberg.

Should Melero win again on Day Two at the Shenzhen Sports Centre, he will retain his World Championship title for the third straight year. 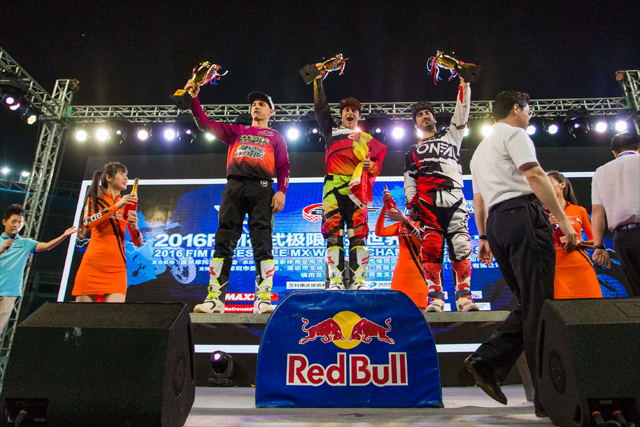