Saturday night, NIGHT of the JUMPs stormed the Bavarian state capital for the seventh time.

10,000 spectators crammed into the sold out Olympiahalle to see some of the biggest tricks at the longest running Freestyle Motocross sport series in the world. The fifth contest of the year and first of the international events was held in Munich after the four World Championship events previously held in 2017.

10 riders took part in the freestyle contest including the German Red Bull star, Luc Ackermann, also Maikel Melero, Libor Podmol and Remi Bizouard to round out three world champions the sport has seen in the rider list. 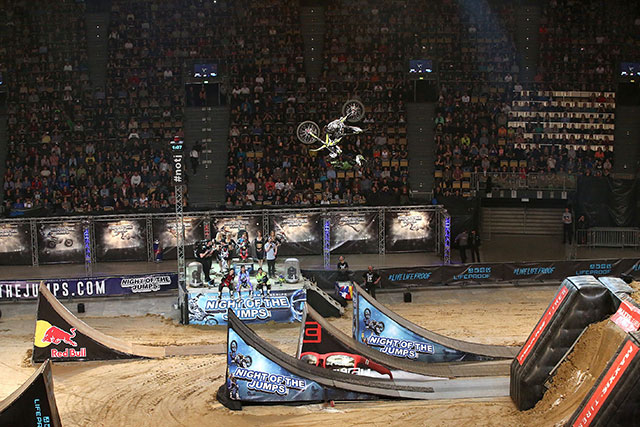 Maikel Melero
The spectators were rewarded with their patronage, witnessing first hand some of the craziest tricks ever seen in the Olympic Hall. In Qualification 4 riders utilised the quarter pipe for the Egg Roll and 3 riders bringing the flair. One of the riders was Remi Bizouard who did his first ever Flair at NIGHT of the JUMPs, but also from the left ramp. Not the traditional ramp on the right. Unfortunately for Remi, his qualification run would end abruptly when he landed on his gear lever on his second jump, the Ruler Flip, and had to finish his run in frustration. Bad luck also came to Filip Podmol who had a huge crash on his California Roll on his last jump in the Double Up.

Pat Bowden won the Trick of the Day in the preliminary round with his Rock Solid Backflip, the first time he‰Ûªs ever landed this trick at NIGHT of the JUMPs. With a solid run, he secured a spot in the finals in third position. The second Australian, Ryan Brown from Melbourne pushed his way into the Top 6 Final with a solid run and no mistakes. Ryan landed his first ever Egg Roll in competition and his signature Switchblade Flip over the Red Bull SuperKicker ramp. Libor Podmol, despite a recently fractured hand, was able to battle to get into the final alongside Leonardo Fini, Luc Ackermann and Maikel Melero. 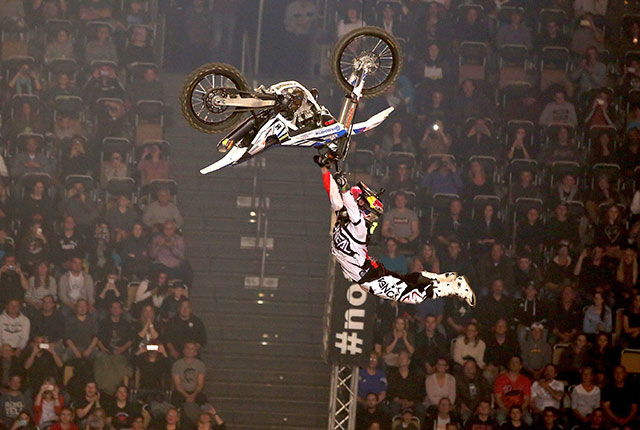 Luc Ackermann
In the LifeProof Best Whip Contest, the audience watched some of the biggest whips ever in Munich. Filip Podmol and Pat Bowden went head to head in the final. After his bad luck in the Freestyle Contest, Filip was looking to win the Whip Trophy, however Pat Bowden‰Ûªs perfect turndown whips almost going 180 degrees, put Pat in the top spot and taking home the LifeProof trophy.

In the Maxxis Highest Air, there was a jump-off between Massimo Bianconcini and the Berliner, Kai Haase. Both riders pushed to the 9.50 height and Kai Haase was ahead in the countback, as Massimo needed two attempts to surpass the previous height. When Kai approached the 10.00 metre mark, he found himself cross-rutted and headed towards the right hand side of the jump. After taking down the bar, he crashed spectacularly to the side of the jump. Besides a bruise on his hand, he appears to have not suffered any further injury and still very happy to take the victory. Massimo could have taken another attempt, but out of respect to Kai, didn‰Ûªt wish to push his luck on this night. 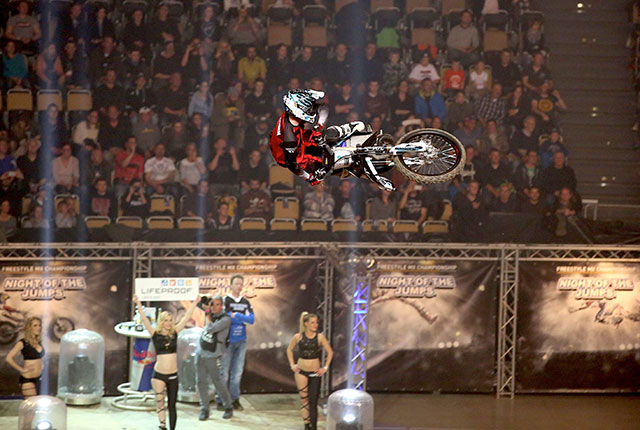 Aussie Pat Bowden
After the Snowmobile backflip in Munich for the first time, the crowd were ready to see what was coming in the final. Leonardo Fini managed to get past Ryan Brown after Ryan made a mistake on his Seat Grab Backflip. Libor Podmol was able to fix his mistakes from the qualification and put together a much better run in the finals, despite his broken hand to land the Egg Roll, TP Roll, Surfer Tsunami Flip and Cliffhanger Flip and taking 2nd place on the podium.

Pat Bowden pushed for his first ever NIGHT of the JUMPs win with a Double Grab Flip, Ruler Flip, Hart Flip, Suicide No Hand Flip to No Hand Lander and Rock Solid Flip, but it was only enough for third place. The local hero, Luc Ackermann crashed on his California Roll attempt and was unable to get past the other riders to make it to the podium. If he had landed it, perhaps he could have made it to the top spot for the night. The German rider, however fell back to sixth place with the crash.

The reigning three time world champion, Maikel Melero, was the final rider of the night and delivered a lightning fast run including the Egg Roll, Nac Flair, California Roll, Seat Grab Flip, Tsunami Flip and Lazyboy Flip. With high scoring points, he secured another factory in front of Libor Podmol and Pat Bowden. ? 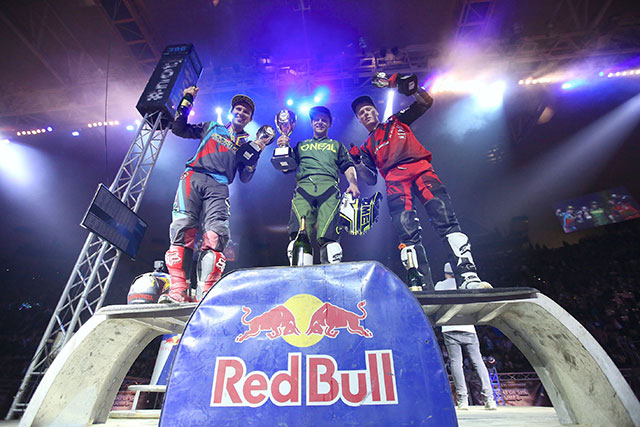