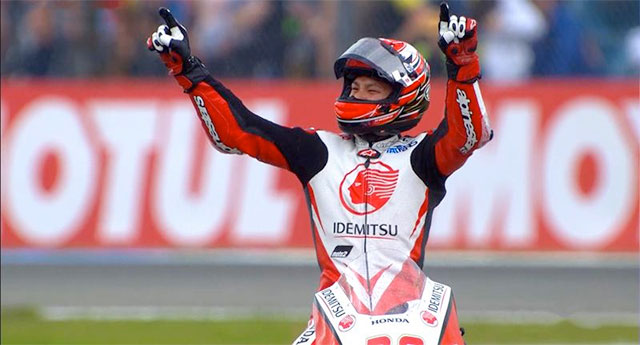 Takaaki Nakagami enjoyed his maiden GP victory in his 111th race after the rain brought out the red flag, the Japanese rider finishing ahead of ahead of Johann Zarco and Franco Morbidelli.

Fears of rain were briefly put to bed as the Moto2 World Championship race at the Motul TT Assen lined up on the grid. The 24-lap race began with a lightning start from pole setter Tom Luthi (Garage Plus Interwetten), who seized the lead immediately. Sideways action into Turn 1 saw Dominique Aegerter (CarXpert Interwetten) slide into second. Rain clouds threatened throughout the race, some riders risking more than others as it got darker and darker.

Having led Warm Up, Takaaki Nakagami (Idemitsu Honda Team Asia) carried his pace through to the race and was inside the top five from the moment the lights went out. The top five were close and on lap six the Japanese star passed Luthi for second and attempted to close in on Franco Morbidelli (Estrella Galicia 0,0 Marc VDS) who had taken an early leadi.

On lap nine he went up the inside of the Italian and took control of the race. His times were often half a second faster than those behind, quickly opening up a 1.5 second lead which he expertly managed. Two laps from the end the red flag was brought out due to rain, cementing Japan‰Ûªs return to the top step. This is Nakagami's first win in the World Championship, having had to settle for second on so many other occasions.

After the first five laps it looked as though Johann Zarco (Ajo Motorsport) would be out of contention for victory, the French rider struggling to find his pace early in the race. But once he found his pace he flew, jumping into the podium battle on the tenth lap. He led Morbidelli and Luthi as the final ten laps began, the trio battling for second as Nakagami had vanished. Zarco was making progress on the Japanese rider, spots of rain in the closing six laps hardly slowed him but his chances of victory were ended by the red flag. Second sees Zarco right back in championship contention as joint leader.

From fifth on the grid, Franco Morbidelli held his position in the early laps, getting past Johann Zarco and Takaaki Nakagami with relative ease. The Italian was flying as he passed Luthi for the lead into the chicane on lap four. He held first place for some time but was eventually passed by Nakagami, the Italian focusing on his own race to secure third, only his second podium finish.

Sam Lowes (Federal Oil Gresini Moto2) was fast right away and immediately found himself in contention, the Brit pushing hard to catch Luthi out the front but was unable to stay with the leaders. His pace improved towards the end and he challenged Lorenzo Baldassarri (Forward Team) for fourth, a massive moment saw him briefly drop to fifth, recovering for fourth. This result sees him only five points off the championship lead.

Lorenzo Baldassarri (Forward Team) would eventually cross the line fifth, just ahead of Alex Rins (Paginas Amarillas HP 40). A poor start saw him outside the top five, the Spaniard having to work incredible hard, sixth his reward as the leading three in the championship closing up yet again as the leading three are split by only five points.

Luthi sat comfortably behind Zarco in second for much of the race but suddenly had his pace drop off. The Swiss rider lost a number of positions before crashing at Turn 8 on lap 19.

There were further falls for Axel Pons (AGR Team) and Luca Marini (Forward Team). Like Luthi, they were unharmed.